It’s that time of the year again… the search for the best games of the year.

What will Hitman 3 get? What will it be recognised for? Will it be nominated for Game of the Year?

Stay tuned here, and feel free to post any news on the best of 2021 nominees.

Won PC Game Of The Year 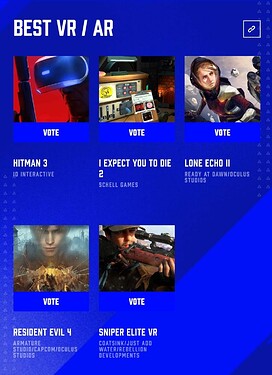 Can’t find much else yet on other outlets’ nomination lists so far.
Shame it didn’t get anything for GOTY, or even Best Direction, Ongoing Game or Community Support. There’ll be others I’m sure

I’ve been waiting for the nominations for a while now so I’m disappointed that HITMAN 3 only got a nomination in the Best VR/AR Game award, I would’ve even taken a Best Action Game nomination if it didn’t get one in the Game Of The Year award.
Twitter surprisingly agrees. There are many more tweets like this 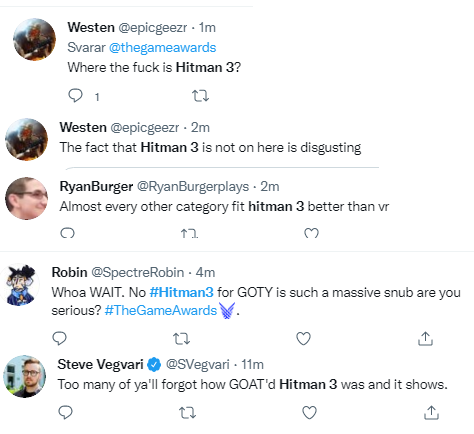 I still have hope for other events and publications/media to recognise H3 with a sweet GOTY award.
The winners of the Golden Joystick Awards will be revealed on the 23rd. HITMAN 3 has three nominations, including a GOTY award nomination.

Why should it be nominated for anything else besides VR? It’s the only things that differentiate it from H2018 and H2016. Give games that are actually new or sequels that actually sequels a chance at the awards. H3 could fit in the sports category since it’s a rehash of H2018 which that was a rehash of H2016, so

Tbh I think Hitman 3 is the best out of the trilogy, and it deserves better than just VR accolades.

The level design has been perfected, with each level (apart from the mostly scripted last one) being very swiss-cheesy. There are new twists on usual contract formulas/opportunities in basically every level

I really enjoyed every base game level this time around, and it deserves at least nominations for some ‘best of’ categories.

I dont get goty awards, though it wouldve been fun if hitman got nominated for goty

It’s just a recognition and most importantly for devs and publishers, a marketing gimmick to re-release games in a GOTY edition package. I guess people tend to buy games that have GOTY written on the cover than games that don’t

Another year without a Hitman game nominated in a category it deserves.

They are all saying that it’s one of the best trilogy of this gen but when it comes to official nomination, nobody is there. The only ones who had the decency to recognize the work done since 7 years is PC Gamer (Hitman WOA through the third game is their 2nd best game of all time on PC) and the Golden Joystick Awards.

I blame Shitdoza and DLC.

IO staff did not even react to Hitman 3’s nomination in the VR category, it shows their disappointment, last tweets : 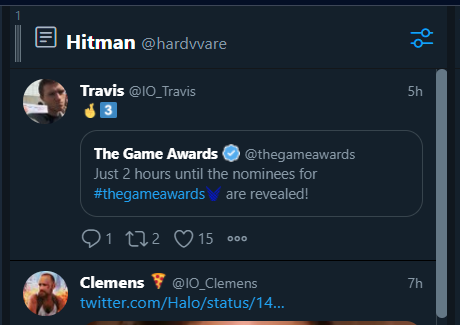 I mean, it’s nice for the team who worked on the VR support, but I think they expected more, like Best Art Direction or Best Score or Audio design or Best action/aventure.

Even no nomination for “On Going” through the 3 games, wtf.

Awarded to a game for outstanding development of ongoing content that evolves the player experience over time.

That would definitely go to Psychonauts 2 / Deathloop / Ratchet & Clank: Rift Apart. No way Hitman 3 would have a chance in that category. Even in the rest of the categories you mentioned, H3 didn’t have much chance, even for a nomination, let alone winning. Best action / adventure? Nah, a fitting category in which H3 would mop with everyone on the floor with be a stealth category.

Even in the rest of the categories you mentioned

I really disagree, especially about the sound design category. For the rest I can understand, but the score and the sound design, Hitman 3 deserved a place, and by far. Hitman 2 already deserved both. 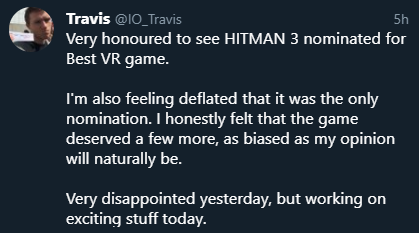 Hitman 3 the maps little disappointed i think it will better and large like hitman 2 atleast , but the story was nice and intersting more than the others

Yet this category oddly features Evil Geniuses 2. As long as we’re judging popularity, it has “all reviews: Mixed (7,290)” on Steam and not a good public reception.
On critic scores Hitman got a bunch of 80/100 and 9/10, but it didn’t merit a nomination in place of Evil Geniuses, for instance.

By strategy, they mostly refer to real time strategy games which EGR2 fits perfectly and Hitman is not that and neither a simulator.

Also, Cyberpunk 2077 got 2 fucking Nominees, not that I played the game, but the reception it got proves it does not deserve RPG of the year, standard is low and these people are stoopid

I think that the January release date was a double-edged sword for HITMAN 3, and this is the other side of it. Even though I’m sure it’s unintentional, entertainment industry awards often suffer from some degree of recency bias: the Oscars is famous for this, with studios perennially releasing their expected big-hitter Awards-candidate films in November/December so that they are fresh in the minds of voters early in the new year when votes are being cast.

I think HITMAN 3’s [completely unfair, IMO] lack of recognition in these awards is partly due to its early release date in the GA’s calendar and that judges may well have had the latest new shiny bauble (e.g. Metroid Dread etc) at the front of their minds because they’d simply played it more recently. The downside of the January release date.

On the upside, HITMAN 3’s release date seems to have been a big part of the reason why it sold so well in comparison to HITMAN and HITMAN 2 - it was perfectly timed for owners of new Playstation and Xbox consoles looking for a AAA game to pick up and run on their new shiny hardware, and there weren’t any other big titles around in January/early February to distract from H3’s launch. (See the atrocious release date of H2 for comparison, going up for sale very shortly after many gamers had just spent big on RDR2.)

On balance, I’d prefer IOI to have reaped the benefit in sales from their January release date so that they are well funded for their future endeavours (which I very much hope includes rounding out the WoA trilogy with the long-hoped-for proper Offline modes and permanent return of ETs etc, as well as Project 007 and their other games), and if that comes at the cost of being forgotten by the Games Awards then that’s a trade I’d be willing to make.

That and Cyberpunk 2077’s trainwreck of a launch.