@Kevin_Rudd I haven’t played the Chongqing Noodle Massacre yet, looking forward to it. Based on your experience making that, how challenging do you think it would be to randomize patrol routes, or add new guards and routes, in a mod?

Not too hard, I have two NPCs with randomised routes in it.

Seeing what was done with Chongqing and the Noodle Massacre, it makes me hopeful (in that it’s a possibility) that something could be done with Miami… Something I’ve thought would be cool is a rooftop party at night at that Flamingo Hotel. But I’d also expect there to be an interior. Maybe that’s beyond the scope of what was done with Chongqing. I think some of the interiors of the Sapienza apartments (or assets from it) might work if they could be copied over. I’m not asking for it to be done, but if anyone felt inspired… Wow!

Cool
What next update will include?
Chongqing night early (bonus mission view) and Santa fortuna night will be in the future?

Is there a mod that enables debug options like in the Hitman alpha? would be fun to play with.

Unfortunately no. Retail builds omit all of the debug code.

Working on a mod for Hitman 3 that lets you toggle the entire HUD and crosshair off, and replace the crosshair with a laser dot. The laser dot is just a Reshade overlay so it will always show when holding the right mouse button, but it works pretty well.

I wouldn’t mind being able to keep the HUD up, but I sure can go for the laser dot if it’s usable with all firearms in the game sans sniper rifles. I hope that when perfected it can be used on the Steam version.

(Switching the entire HUD off will have some side effects like menus and inventory not being visible, so you’ll have to toggle it back on when doing that)

I’ll def be in if it works with all non-scoped firearms, be it pistols, rifles, SMGs and shotguns.

Anyone who is a poster here a weapons modder or interested in doing that or know someone who is or is interested? I might have a project or two to throw your way if you’re interested, namely an assault rifle family and a pistol caliber carbine/SMG deal.

Made a mod to get rid of the door hacking in chongqing. 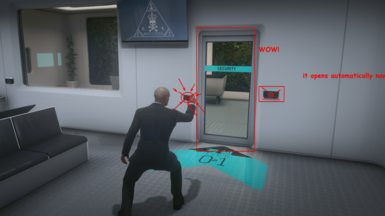 Removes the hacking requirement for doors in Chongqing, but you still need to have the dongles.Works online.

Is this useable online? 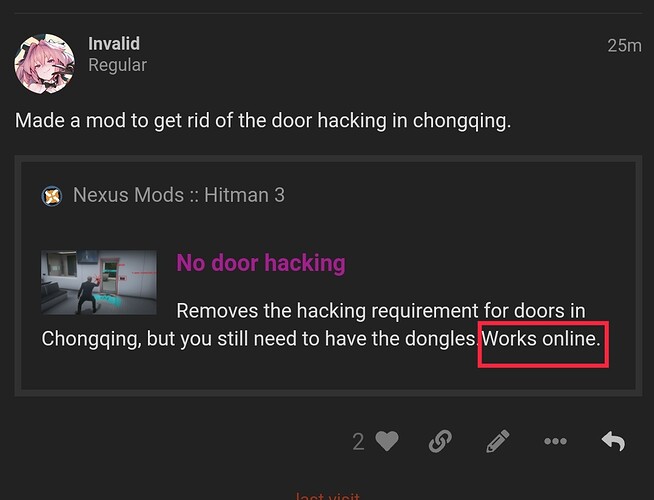 Anyone have any info or updates on this:

That mod looks like a blend of HLA noVR and GTA V’s first person mode. Unfortunately, I don’t see any new progress about it on the channel.