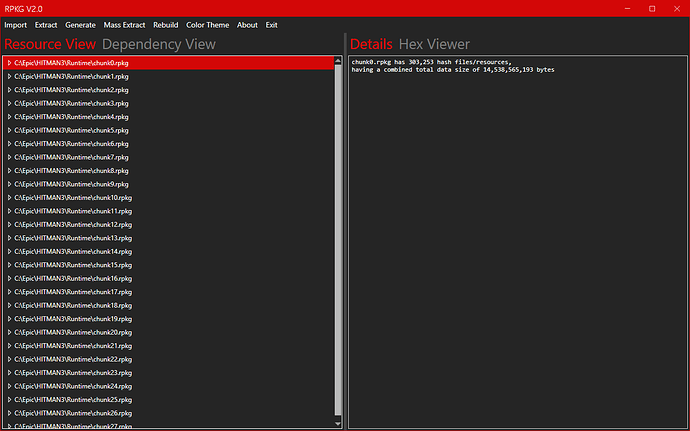 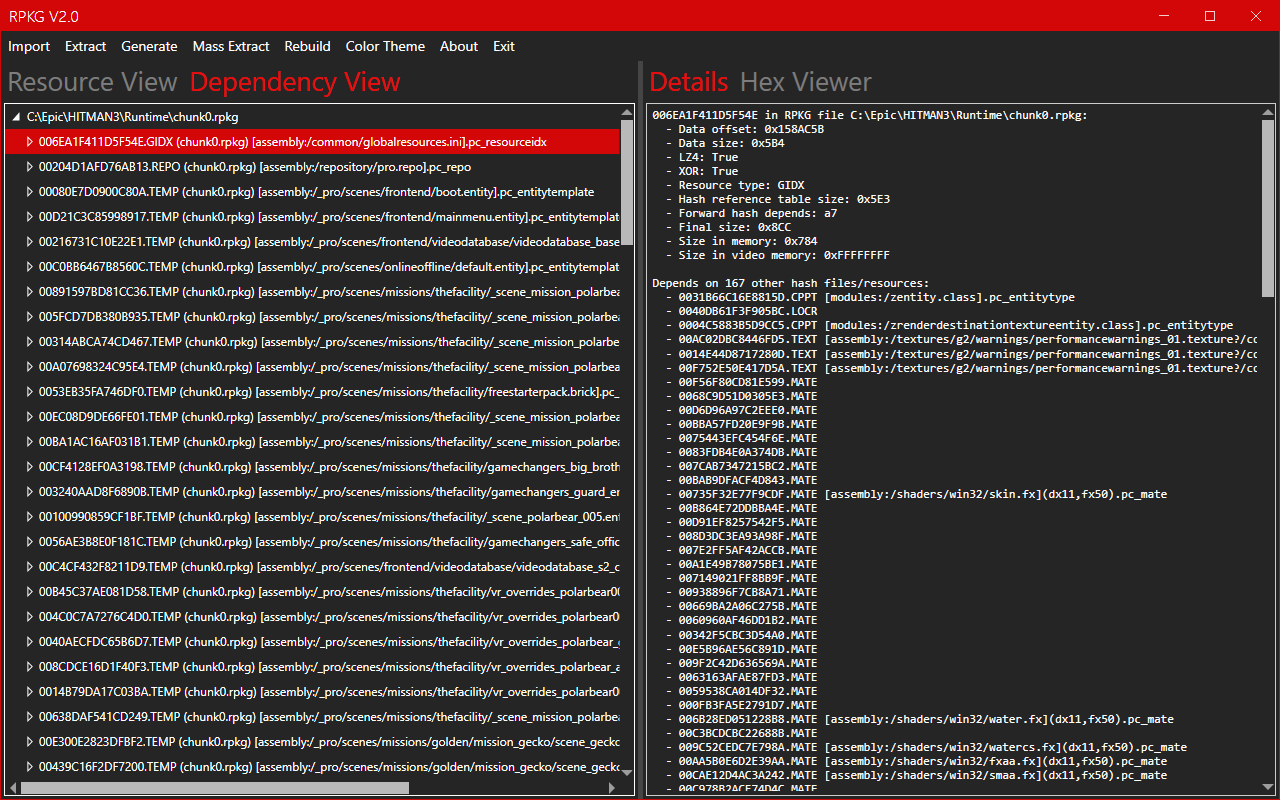 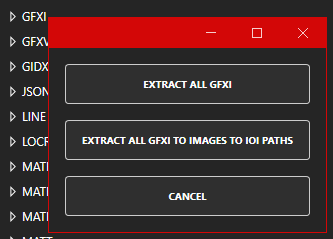 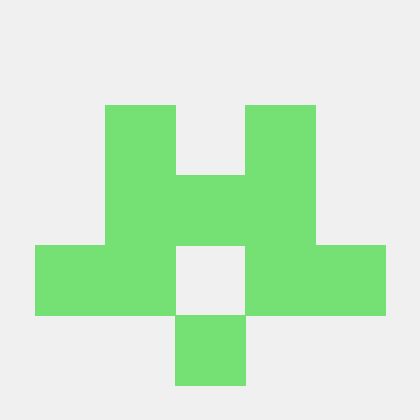 GUI Tool for import and export of Glacier Prim resources from and to glTF.

QuickEdit - a mod editor for Hitman 2

Welcome to QuickEdit, a fully featured mod editor for Hitman 2!
You can adjust the properties of items and some of the game’s AI, and make any mission you like with the powerful yet simple Flow editor. Export your mod in H2Mod format (usable with QuickMod), an RPKG file for manual installation or JSON for advanced users.

QuickMod - a mod manager for Hitman 2

Welcome to QuickMod, a mod manager for Hitman 2 . It allows you to store any number of mods, and enable and disable them at will. You can control the load order of mods easily and have as many as you like.

Something doesn’t line up here…

Something doesn’t line up here…

Oh oops, I’m like half awake at the moment.

Before you start reading, please be aware, that this may not work on your computer.
I’m even not sure if it will work on any different computer than mine.
That’s why I would like you to test it and let me know.

[Description]
As some of you know, players who use NVIDIA can use Ansel to move the camera a little and take screenshots. It’s cool, but there are more demanding users, like me. So I was looking for a way to fully unlock the camera like in Hitman: Blood Money or previous titles. There was no easy solution.

The only thing I found was a walk-around using Ansel. Using this: Hitman 2 Free-cam finally possible (Nvidia-only) you can fly around the map and pause/unpause the game. But it wasn’t something I wanted to use while creating HiTMAN the cinematic movie. Why? You couldn’t move 47 while in Ansel mode, and when you disable Ansel the camera returns to the original position.

So, I started creating my own free-cam mode. I spent several days, but with God’s help and a bit of luck (and I was nearly to forget about this project) … I FOUND THE WAY to move the camera and 47 at the same time. (See the video)

For now, you can lock the camera angles and move 47 independently. In the future, I want to add other features like pause, maybe even I’ll manage to disable all HUD items.

[Compatibility]
Game Version: 2.72.0
Maps: training missions + World of Tomorrow, but other missions should work as well.

Now, below you see some items, I’ll describe it briefly

Freeze CamRotation - This blocks all rotation using your mouse, BUT ALSO you cannot move 47 with your mouse so you are stuck with your keyboard. Still, it’s better than nothing ;).

Freeze Character - It blocks 47. You can still see his animation, but he walks without moving a bit. Unfortunately, the camera freezes as well allowing you to only rotate around one point. You can use it to record some creative starting scenes (as I presented at the beginning of the video).

[Hotkeys]
You can move the camera around (X, Y, Z) using your keyboard. It’s not smooth and I don’t think there is a way to make it smooth (any code injection experts here?). You should use the Ansel solution for that.

Important!
You cannot move your mouse, select a destination, and fly towards. You can only move around using game-world coordinates. IT may be possible to achieve that effect like in Ansel, but I’m too stupid to do that.

This is also a great camera tool 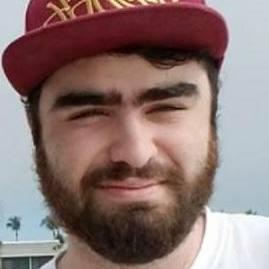 Installation To install, download the release and move all 3 files (ICGSInjector.exe, IGCSInjector.ini, and Hitman2CameraTools.dll) to the Retail folder of your steam Hitman 2 directory located in ...

Archive of the original thread from the old forum: HITMAN 2 - Modding Thread

this guy made a free-roam (flying + noclip) mod Does anyone knows how to make functioning Gear Editor mod?

Everything functions as it does. The file opens, I can choose the item, but when I restart a mission, 47 keeps the same loadout as previous one, nothing changes.
The mod is said to work with latest patch. It seems that I get DX12, but when I “downgrade” the game to use DX11, it doesn’t change anything. Any help? Thank you

I don’t think that mod works anymore, it would need to be updated unfortunately.

Well I see, thanks for the answer. I’ll see if someone manages to get it work or updated…

YES! I’ve been waiting for something like this forever!
I’d love to explore more out-of-bounds areas but methods until now have been really janky and difficult to control.

They deleted their github account I think. Not sure why.

Laying low due to takedowns.

All Missions Offline with Mission Difficulties Mod for HITMAN III

https://drive.google.com/file/d/1GzCmcT69kQ-VyFapKxlzZ2bpg6ySJkEw/view
Check post #85 for details about my version of the mod.

Original Post:
G’day everyone. It’s been a long while since the last time I posted on the old Hitman Forum.
I wonder if anyone has learned something new, interesting and exciting related to modding while I was away.
I know it’s now possible to replace models, I think there’s a new way to do texture mods, there’s a mod manager now and a handy tool for editing the game’s items, missions, etc.

Since HITMAN III will be an Epic exclusive for a year, I want the Steam users (who chose to wait) to know that mods for HITMAN 2 exist so I wrote a guide that contains a comprehensive list of mods I know of:

Disappointed that HITMAN III isn't here on Steam for a year? Why not spend the time playing HITMAN 2 with mods while you wait? This is a comprehensive list of HITMAN 2 mods....

In case the archived forum gets lost to time and just for convenience sake really, I included a list of my posts I reckon would be handy, informational or interesting:

Since I got HITMAN 2 freshly installed, I’ve got plans to combine The Finish Line with A Silver Tongue, and Another Life with A Bitter Pill like I did with my Embrace Of The Three-Headed Serpent mission mod.
I don’t think I will do the same for the Mumbai missions since Rangan’s tower will be obstructed.
I still remember I’ve yet to release an update to my The Showstopper - Holiday Edition mod with a new mission where you have to find and kill Santa Klaus. No guarantees but it’s something I might do one day.

Hey, it’s been awhile since I’ve last been here, but I recently figured out how to get jedijosh920’s NPC Disguise Mod work in Hitman 3.

What you need to do is use a hex editor with Little Endian support to edit H2DisguiseNPC.exe. I recommend HxD.

Ctrl+R and search and replace HITMAN2.exe with HITMAN3.exe. Be sure to set the text encoding to Unicode, aka UTF-16 little endian.

This is is all just preliminary findings, and things are subject to break. Be careful not to use any gameplay effecting mods online to tamper with leaderboards and such.

So Mods from 2 works exactly the same with HITMAN 3 ?

There are a few mods on Nexus that replaces models of items, weapons and even some vehicles.
Not just player models and I’m not talking about the NPC Disguise mod or Grey, Knight and Stone suits.