it is been a while everyone. Thanks @Notex for the tools. i would now work to fix my mk2 item improvise items.

It’s possible to load up any map in VR mode which makes the game playable in first person view. 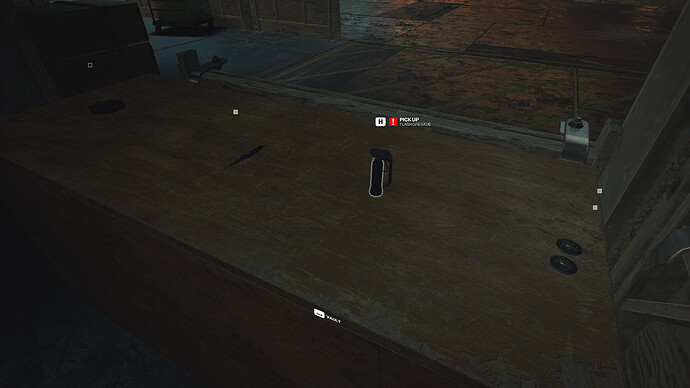 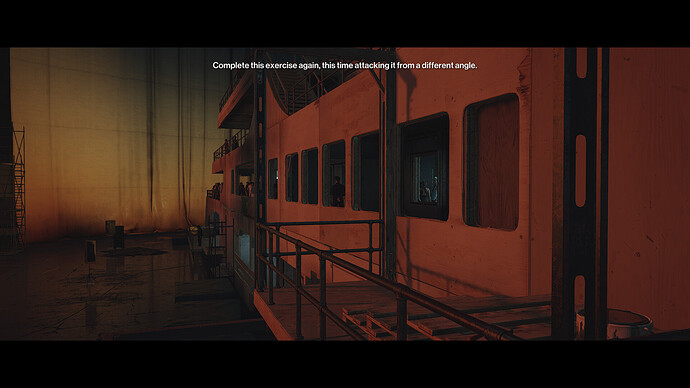 Screenshot (21)1920×1080 384 KB
Action prompts will also appear on the north side of the screen if you’re not looking directly at an interactable. 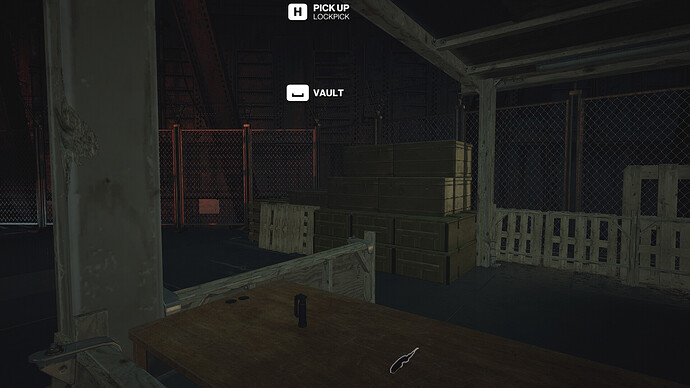 Screenshot (23)1920×1080 456 KB
Because 47 is invisible, his weapons will be as well. I’m aiming a gun right now.
There’s no crosshair so you have to estimate where your shots will be.
Ammo counter and illegal warning are tied to the invisible weapon or the player’s right hand. 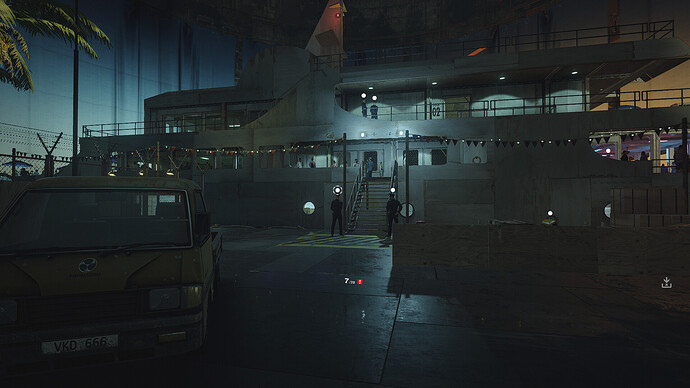 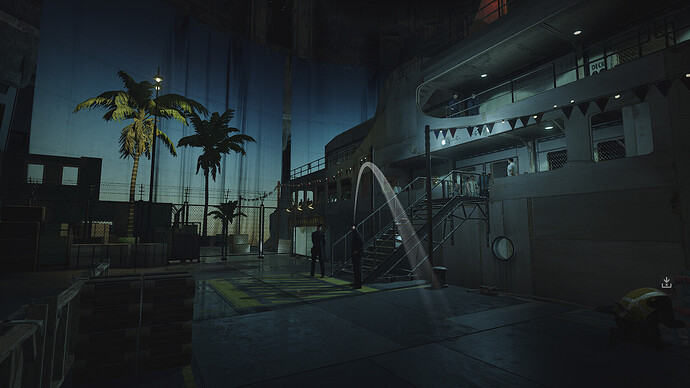 Screenshot (25)1920×1080 478 KB
Some maps like Colorado (only non-tutorial map I tested actually) starts with the camera in third person view but if you move it, the camera will move towards 47’s head.
This is what the VR player looks like when the camera hasn’t reach 47’s head yet. It’s hard to see but if you look closely, you can still see 47’s body. The trespassing warning is tied to his right arm. 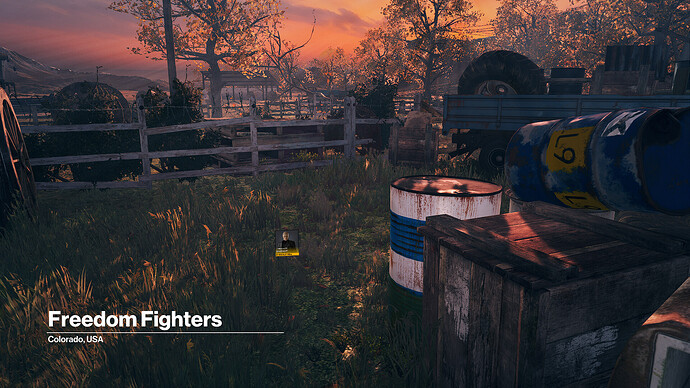 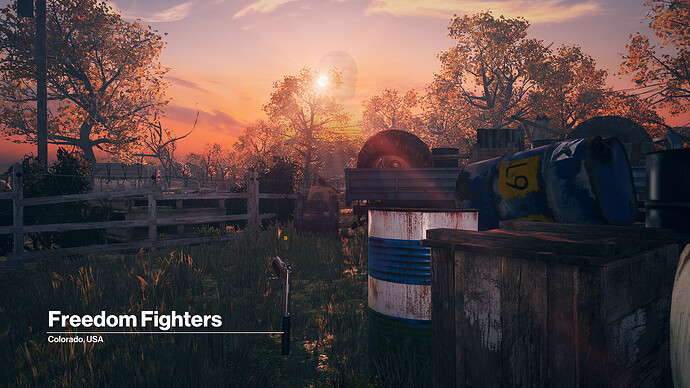 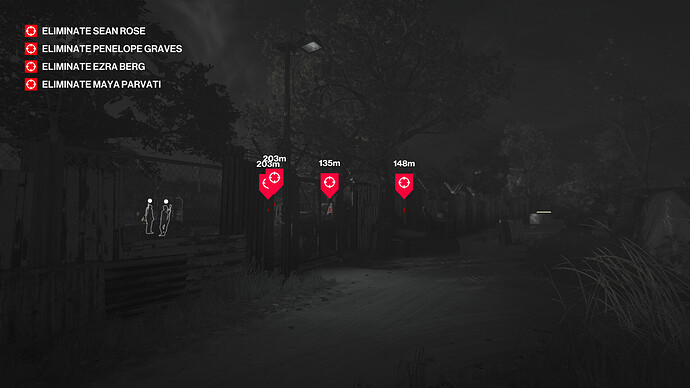 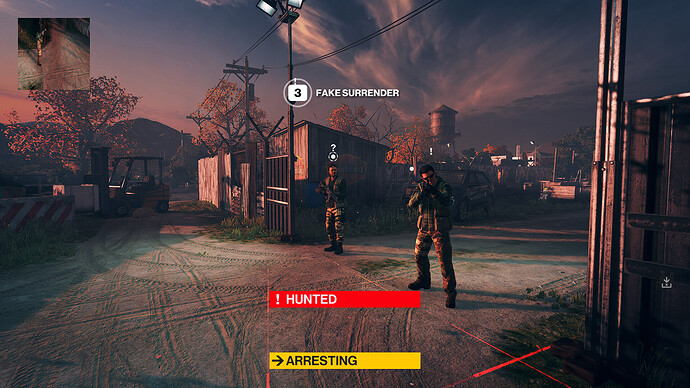 Screenshot (35)1920×1080 1.04 MB
PIP is smaller though. Also, the guards won’t initiate a QTE fist fight when 47 is surrendering.
Am I suppose to physically punch the guard if I could? 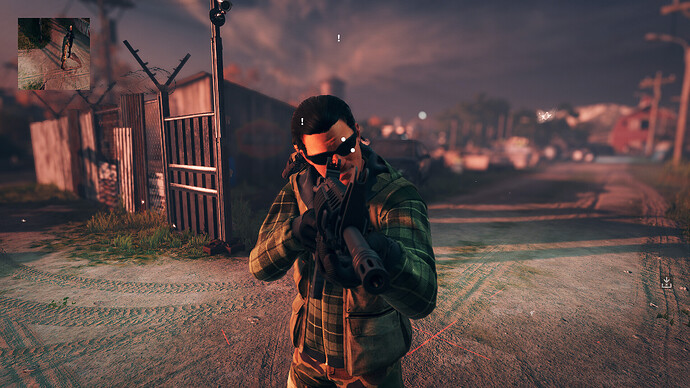 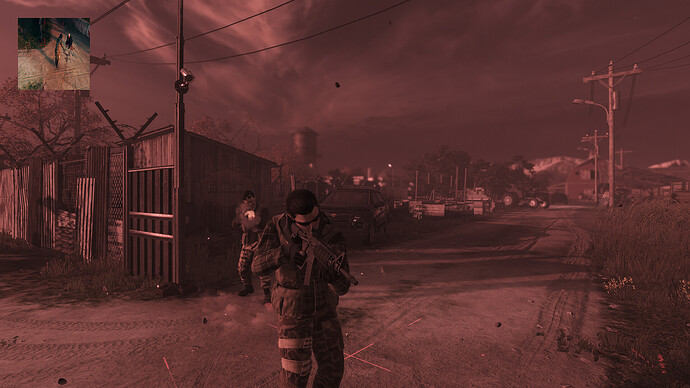 Screenshot (32)1920×1080 529 KB
Another thing to note is that some actions like crouching, vaulting and aiming gun at the ground automatically moves the camera to a certain direction as if it’s recentering, reorientating or something.
Can’t really show anything like that with a screenshot.

The only weapon that will always visibly appear is a sniper rifle. You sort of have a view model here. 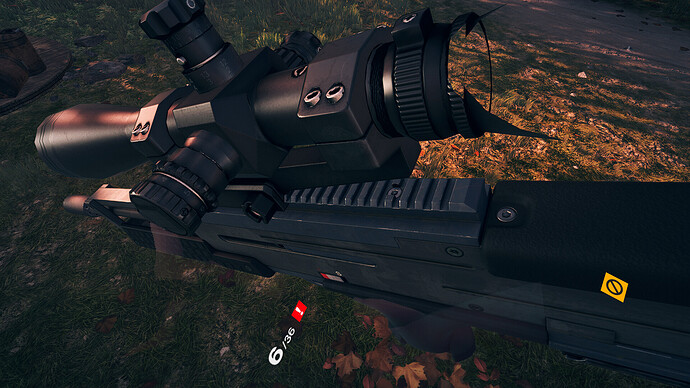 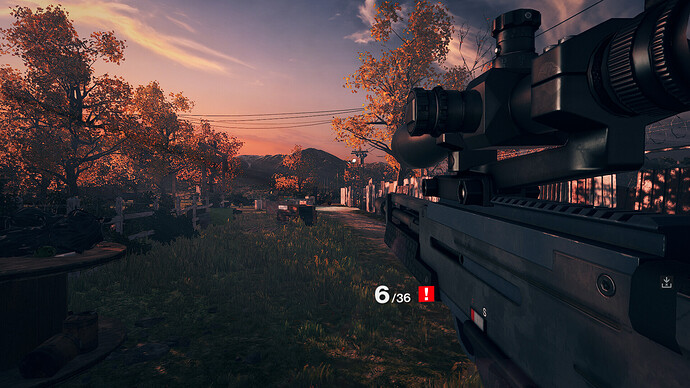 Screenshot (40)1920×1080 920 KB
Apparently, this weapon can make 47 visible while he’s crouching.
HUD elements (except prompts) are still tied to his right arm there. 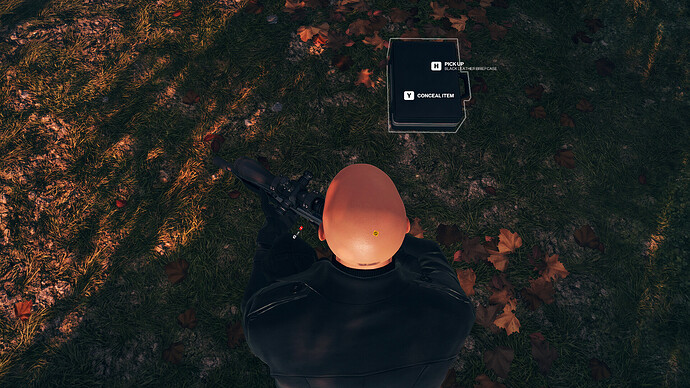 Screenshot (41)1920×1080 1.01 MB
So yeah, VR bricks exists in the PC version and can be loaded but it could probably function fully if the game could recognise VR headsets. I hope IOI doesn’t pull a Capcom.

Can you please do the same with H3 title screen by replacing III with 3?

I might, I just need to find the image for it.

Did you know that the Interactive Dartmoor Benchmark has destructive physics?
Though some people say that the main game does have destructive physics in this map but it doesn’t for me and my simulation quality is set to “Best”. Notice the bullet hole decals on the bookshelf and ladder? 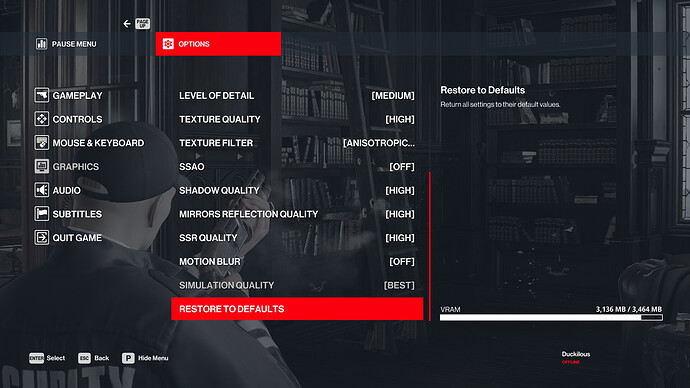 Screenshot (15)1920×1080 325 KB
But I can force the game to load up the brick that enables the destructive physics in “Death in the Family” mission, even with simulation quality set to “Base”. 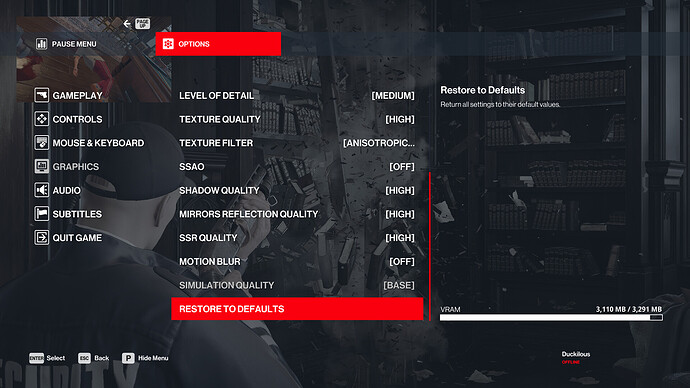 Screenshot (19)1920×1080 401 KB
Judging by the name of the brick “intel_8core_gecko.brick”, I’m guessing this brick should’ve been loaded up if simulation quality is set to “Best” but the JSON mission script for Dartmoor doesn’t check for simulation quality like the maps from HITMAN 2 does.
In fact, the only HITMAN III maps that have “intel_8core” simulation bricks are Dubai and Dartmoor and they’re used for benchmarking.
7 Likes
May Roadmap Discussion
Bowling4Kleers January 26, 2021, 3:33am #65

Has anyone seen anything about FransBouma’s camera tools for HITMAN 2 being updated for HITMAN 3?

Some things may not work correctly but it’s better than nothing for now.
(Credits to Greenhouse for adding H3 support)

You just made my night 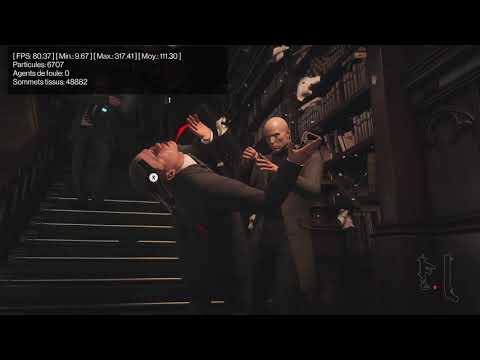 Haha, now that’s how you do a benchmark for a game

hello everyone. so i have tried to restore my improvised mk 2 items mod. here is the link:

i have replaced some of mk2 and mk3 items with interesting stuff. This mod only works in OFFLINE mode!

feel free to download and use it.
and of course, let me know if there is mk 2 or mk3 item replacement idea. please let me know, i can try to work on it.

so what included in the mod:

hey has anyone figured out how to use the NPC mod on hitman 3 yet?

Hey, it’s been awhile since I’ve last been here, but I recently figured out how to get jedijosh920’s NPC Disguise Mod work in Hitman 3.

What you need to do is use a hex editor with Little Endian support to edit H2DisguiseNPC.exe. I recommend HxD.

Ctrl+R and search and replace HITMAN2.exe with HITMAN3.exe. Be sure to set the text encoding to Unicode, aka UTF-16 little endian.

This is is all just preliminary findings, and things are subject to break. Be careful not to use any gameplay effecting mods online to tamper with leaderboards and such.

TY but i have tried that, it doesnt recognize that i have the game running when I change Hitman2 to Hitman3, if there is anything else I can do though let me know <3

Be sure to set the text encoding to Unicode, aka UTF-16 little endian.

How is this accomplished? 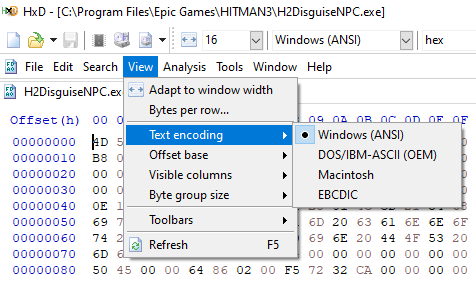 Edit: NVM, Found it. The setting is set when you find it. 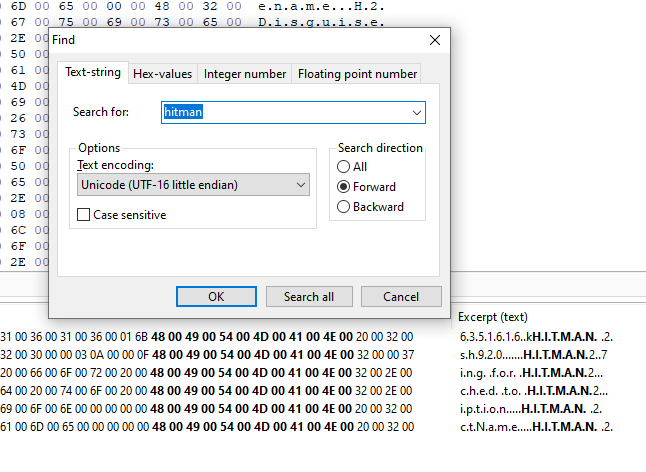 That’s curious…
Okay… So, just changing hitman2.exe has no effect for me.
What does make it work is changing ALL instance of HITMAN2 to HITMAN3.
BTW, it’s in the same exact folder as Launcher.exe.

It seems the only “HITMAN2” that actually needs changing for it to work is at 77FA. 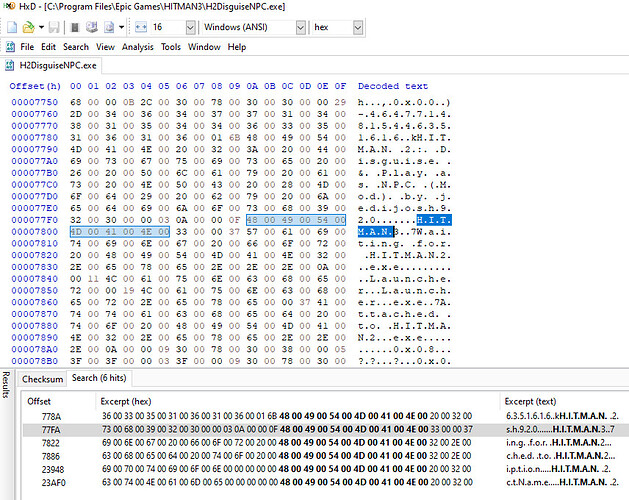 Not all too code savvy; what exactly is stopping the game? Is it not coded to accommodate PCVR headsets (yet?) specifically?

I don’t have access to the source code so all I could really do is make the game load up a mission with something that enables VR mode which won’t be enough for the game to recognise a VR headset.

Though apparently, someone found references to PCVR in the game’s data such as Oculus and actual grip controllers (since HITMAN VR for PSVR only uses DualShock) so I guess the game was accommodated for PCVR headsets and controllers but not enabled for the time being.

But after doing that, now I am getting this app cant run in your pc error