Hey can you please explain this a little bit more in detail, a file called HITMAN3.EXE.BAK is created when i do this and it doesnt work so i dont get it

If you want the classic H1 title screen + music you can use this: chunk0patch1.rpkg - AnonFiles

I edited my title screen a while back. You can edit the logo and background images. 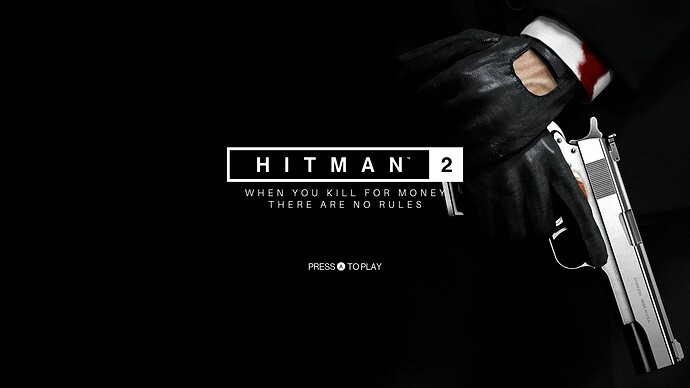 I still have the link for the documented file paths and true file names of the images in case we want to change images rather than edit them:

As for the voice lines, there’s like thousands of them and all of them are named in hexadecimals so it’s incredibly difficult to specifically find the audio files you wanted, especially voice lines. 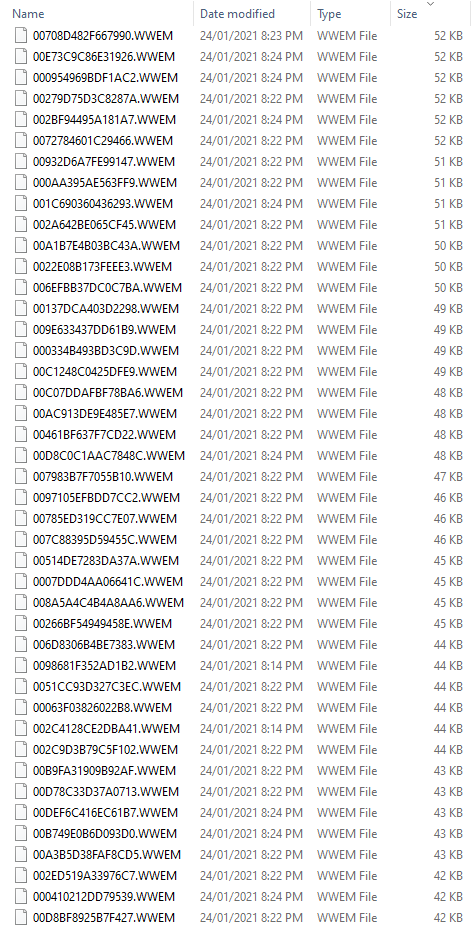 Wait a minute…is that map actually in the game?

(please avoid spoilers in your answer)

Wait a minute…is that map actually in the game?

That map background has been in the game since Hitman 2016 if I recall.

That map background has been in the game since Hitman 2016 if I recall.

Yes i recall seeing that sort of map background in H2016. But it wasn’t incorporated as interactive as it seems to be here.

Can you please give me more details about that H3 map without spoiling please? This looks really interesting!

Can you please give me more details about that H3 map without spoiling please?

What map in specific?

What map in specific? 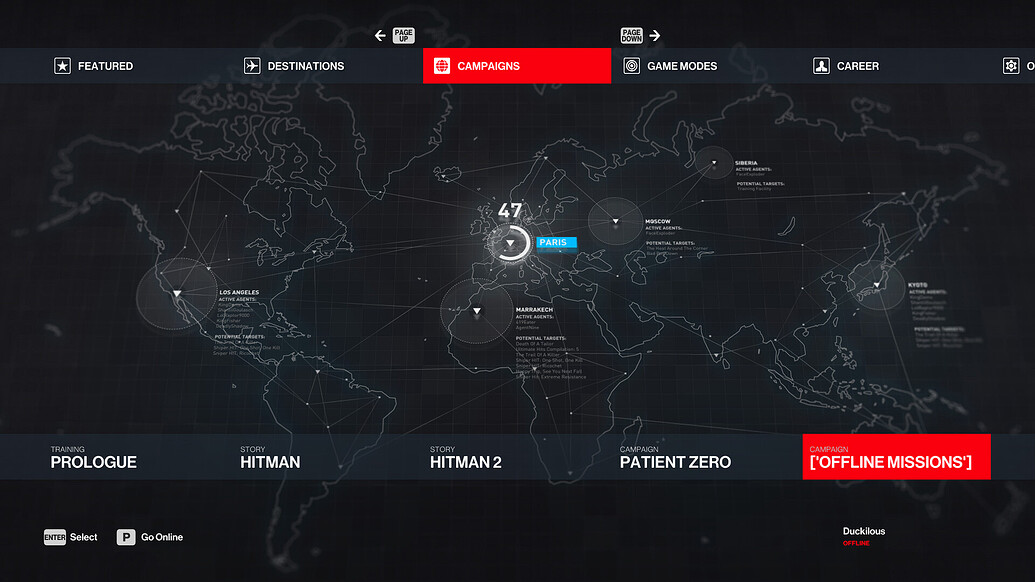 That one. Does it interacts with the menu? Can you click on it?

I believe that one was added in by Duckilous lol. It’s just a custom menu entry.

Amazing work! Wish it was official tho

Oh you aren’t talking about the [‘OFFLINE MISSIONS’] text? The background is official and I believe it was used in very early builds of Hitman 2016 before retail. It’s just an image, not interactable at all though.

The map background? It’s just a static image that the game still happens to have despite left unused.

I believe that one was added in by Duckilous lol. It’s just a custom menu entry.

Well it took fricking forever but I finally checked all the JSON files from chunk0.rpkg.
I documented the ones that contain information of the game’s missions. Here’s the list: 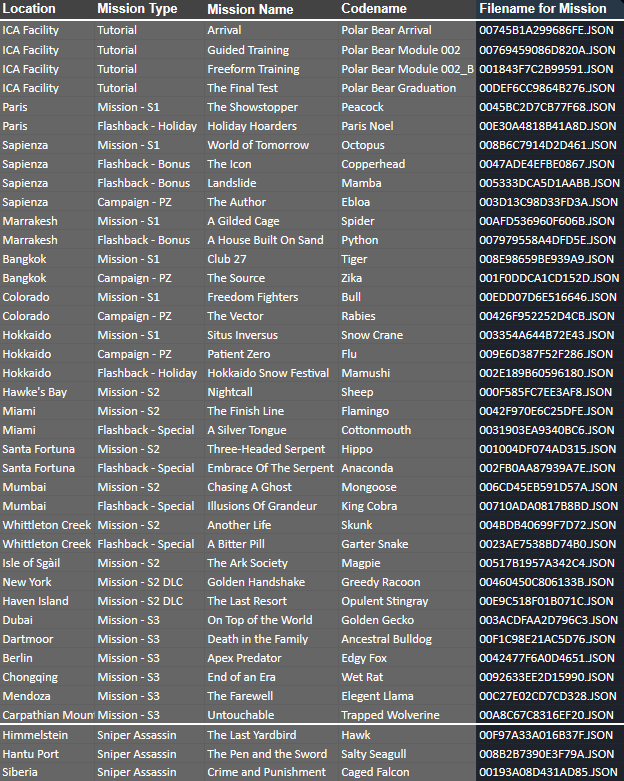 MissionJSONList624×781 40.8 KB
I noticed there’s no JSON files related to most previous escalations, user-created contracts, The Sarajevo Six and unused “The Brothers” mission that HITMAN 2 had. The “negroni” brick from The Brothers mission still exists according to what’s in the “packagedefinition.txt” file.

I did found some JSON scripts that contains some unique targets, code name, brick and entity not found in “packagedefinition.txt”. They’re probably just Escalations.

While there’s no Escalation JSON scripts containing the mission info itself, there are some scripts that contains other information such as Entrances, Exits, Agency Pickups, Actors, etc.
These Escalations’ code names are: Rafflesia, Calluna, Tumbleweed, Pansy, ArcticThyme, Torenia, Lotus, Dandelion and Hellebore. There’s also “Desert Rose” for Dubai.

I know what you’re looking at.

Turns out we do have four unused mission slots.
This time they are: Polarbear_Module_002_C, Jaguar, Lynx and of course, the VR Tutorial which is selectable. 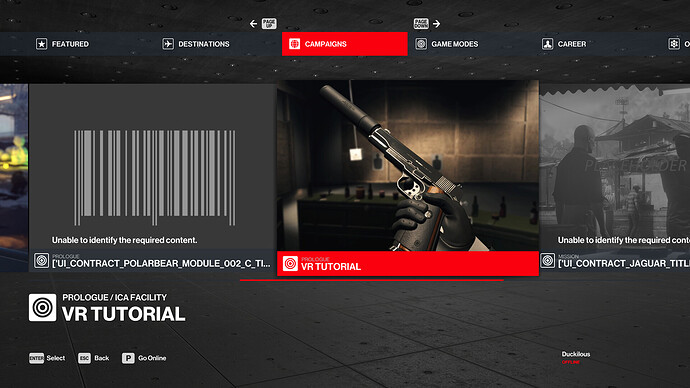 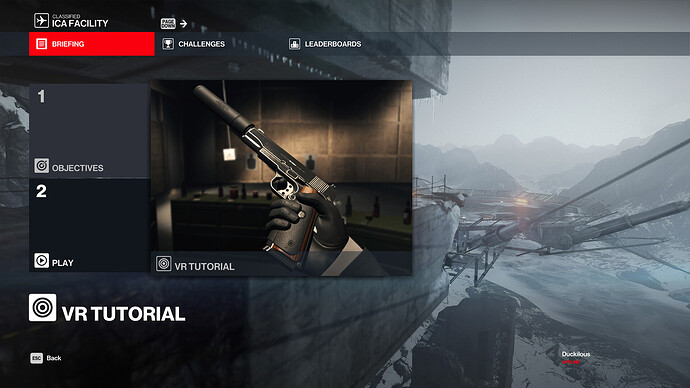 Screenshot (13)1920×1080 313 KB
I do have a VR headset connected but of course, the game doesn’t recognise it.
But it does put the camera inside 47’s head and render him invisible which means the game sort of has first person mode. Here’s some screenshots of the VR tutorial in non-VR. 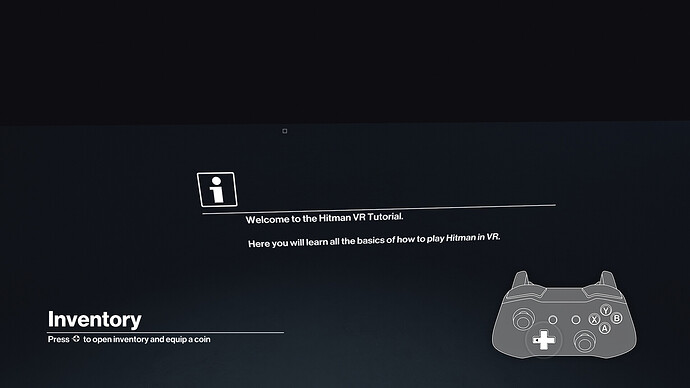 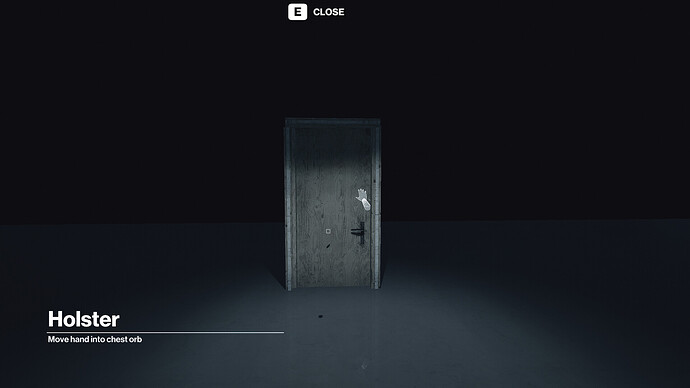 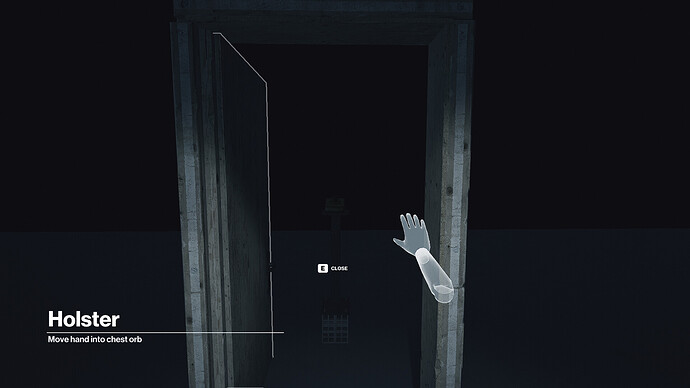 Screenshot (12)1920×1080 207 KB
I can only move forward in this map but my bindings are still usable such as checking inventory, picking items up, interacting with objects and throwing things.
I can’t go any further in this tutorial because I’m stuck in the “Move hand into chest orb” part. If only…
15 Likes
Notex January 25, 2021, 10:56am #56

How the hell does this work

I edited my title screen a while back. You can edit the logo and background images

Can you please do the same with H3 title screen by replacing III with 3?

Hi Notex i have some idea to mod this game(language mod thai lang) Hitman 3. so i try to find and looking for how to mod this game. Finaly i found you. Now i download you tool RPKG into my PC and i can’t open you’r tool i don’t know why so please you can help me ?

It’s a command line tool. You will need to use command prompt with it. Editing the language of the game isn’t possible yet though with this tool.