How do I unlock the pen? I check eta and there is no reward for it. I beat both eta released for November. Did not get nor does it show anywhere that it’s a reward. Am I missing something?

The pen isn’t released until the second batch arrives on Thursday.

and the et arrives this friday the one in dubai

Didn’t see the date. Blind me. lol. Thanks.

Fuck me, the font in the roadmap is awful, lol, I’ll delete the original post, lol

Completed the Elusive Targets Arcade that were released today (17/11/22) and did not receive the Ancestral Fountain Pen. I am on Xbox Series S.

Won’t surprise me if there isn’t going to be a pen and that IOI woll either have this ET be an awardless challenge or release yet another suit in instead of the pen such as Subject 47.

Where does that idea even come from? When have IOI ever announced a reward and then back-tracked it? IOI have already said they’re looking into it and will resolve it. No need for baseless guesses.

New Elusive Targets Arcade and relative challenges are not available after 2 hours. What happened?

Think this is a coincidence it just happens to be the pen that has unlock issues?

Yeah, actually. There’s nothing special about the pen that would make unlock issues any different than any other item. Why is the pen suddenly suspicious?

It’s the first of it’s kind available for people who hadn’t beat The Undying".

Completed the Elusive Targets Arcade that were released today (17/11/22) and did not receive the Ancestral Fountain Pen. I am on Xbox Series S.

It’s probably just a server bug that’s gonna be fixed in a couple of hours / days, like the missing Classic objectives in Ambrose.

I still don’t understand your point. Every item in the game, at one time, was the first of its kind. There is no reason to think that the pen is being delayed intentionally or that it will be replaced as an unlock because it wasn’t available before. I have the original one in my inventory right now.

I think you’re just being pessimistic for no reason.

Has those who beat The Undying and carried over been having the same problem with the Ancestral Fountain Pen unlock?

No idea. I haven’t tried yet (because I heard there were issues with the unlock and I won’t play the game until later this evening). Everyone that has posted about it said they didn’t get the unlock and IOI has said they’re looking into it. That’s literally all we know. Anything else is just conjecture but it isn’t some conspiracy to keep people from having it.

Sorry to ask but when and where they said that they are working on it?

Thanks for the tag. We’re looking into it.

Already posted in in the ETA topic, but for visibility purpose : the challenges have been activated.
The Ancestral Fountain Pen can be unlocked. 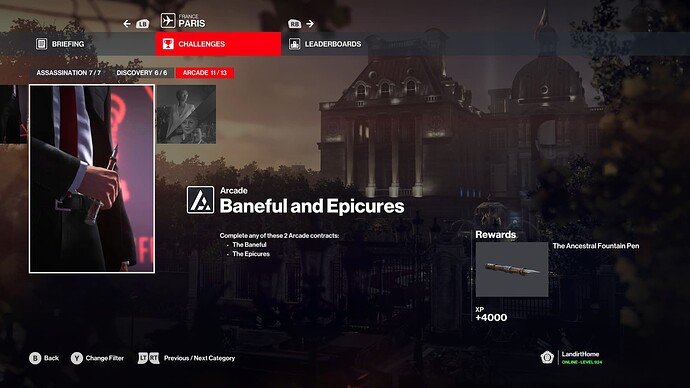 The challenge came late and has become a daily routine for ioi.