In one hand this is true.
On the other hand : we’ve just had a new map and items that broke a bunch of things (most notably the entirety of the waiter disguises on all maps). We are also all out of both ETA and ETA rewards.

But I still hope for Freelancer soon, even next month. Especially if the Hitman Live Team wishes to maintain it with some extra content in the following month.

I will also still hope for a Silenced Striker.

The one prediction that I have currently is that the last Year Two Elusive Target in december/january (and maybe the last full new release of an ET outside of reactivations) will be Sergei Larin The Forger.

The first shall be the last and all that.

Here’s the (many) things I’d like to see in the October roadmap/patch, in no particular order:

A way to unlock the Florida Fit with Gloves, Explosive Pen, and Lil’ Flashy

A way to unlock the Aluminum Travel Briefcase in Hitman 3

The Trinity Pack made purchasable

Bringing back the ability to save default loadouts for each map

“Pawel” Frydel and “Nina” Torvik having their names fixed

If I get 3 of these things I’ll be happy with the patch. At the very least, it’ll be nice to finally have the Haven Island sight bug fixed

I hope IOI fix bug with non-open doors in Patient Zero Hokkaido and just Hokkaido and in Carpathian Mountains. This bug was get with 1.100.0 patch but IOI yet not fix it

I will also still hope for a Silenced Striker.

Really? A silenced Striker? I truly think that the Striker being loud is both the charm and the balance with that gun, a silenced striker sounds op to me, but hey, maybe I’m wrong and maybe a silenced version will happen to exist

It’s my obligatory wish that I tell every roadmap.
I just want to have fun with the ragdoll physics (silently). Sometimes it’s about the simple things.

I already forgot that updates are exist and don’t even hope for them, though game still desperately needs them.
Besides, IOI never rolled out updates at the start of the month as far as I remember

Understandable, tho I disagree with that, the loud sound is a part of the magic, but hey, it won’t hurt the game to have that gun

Besides, IOI never rolled out updates at the start of the month as far as I remember

What!? Who art thou that thou shouldest doubt the holy word of Saint Clemens?

For the prophecy SURELY foretells the coming of the Freelancer Gamest Mode! Oh, ye of little faith!

But seriously… I really do think it’ll be part of the (supposedly, promised) update. But I’ve already learned that not everything can go as planned (or the assumed plan). If we don’t get Freelancer, I think I’m going to start getting really nervous.

In my chart nothing will top Ghost Mode.
Seriously.
It was the greatest part of HITMAN 2 and kept me busy when I finished all the campaign and stuff.
I miss it badly

Yeees! Not only a return of Ghost Mode but with it working in multiple/new maps. That would be a completely unexpected surprise. 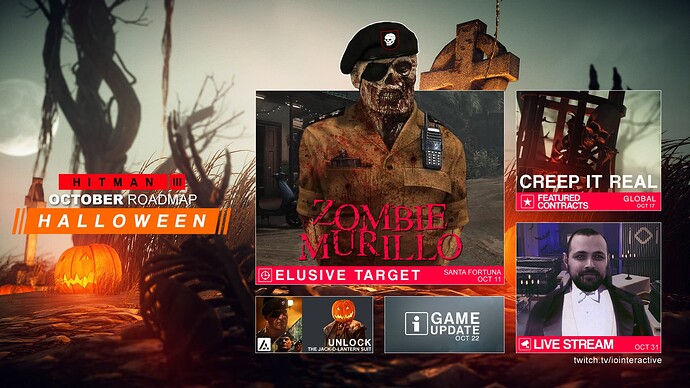 Bruh, heck with all this content, I just want the full livestream (if there will be) to have Clemens wearing a vampire costume

In all seriousness, I wonder if the IOI Insider are over. The one with the devs. (vampire disguise still needed)

I know that currently the devs are given a voice on IOI youtube page in short forms. But long form could still be interesting.
Ambrose Island with the track owner by example. Or a return to Paris with a critical eye of “6 years of experience now let’s look back at the start”.

In case anyone didn’t know, here is the latest video published by IOI. It’s genuinely interesting content. A good way to satiate while we wait for the roadmap. so the pattern would indicate either October or January 2023

If Freelancer is coming, it will go live immediately as soon as the servers come back up

Consider what happened with Ambrose. It was released at the end of the month after lots of teasing

Valid points here and honestly we can’t really predict what IOI will do here, as it’s the first time in a while we’ve started out a new content batch at the start of the month.

I see 3-ish possibilities in my crystal ball:

This one is what I’m expecting, and hoping for, even if it goes against plenty of what IOI has done before with updates.
However, I understand it’s always difficult to keep specific things out of updates, especially regarding Hitman’s extensive datamining history so far. But this is my one hope, if it’s not set for October.

This would be ideal. Finally, we’ve been waiting for a while. It’s finally here and accessible right off the bat.

But it would be weird since we’re almost at the end of September and there’s not been a peep about promotion for Freelancer – something very new to Hitman that I’m sure IOI would try and promote as a big expansion.

This one seems less likely, since it would release closer to Halloween, something IOI generally celebrates as a company each year (social media-wise), and would feel strange jammed in there if it’s not with the theme.
But it would give ample time for promotion for the mode throughout the month.

3a. An IOI Stream / Showcase at the end of October, detailing the Freelancer Mode and kicking off promotion for November.

This also seems kind of likely, at least to me, since I’m still somehow not buying that we’re getting Freelancer in October.

There’s just… something about IOI’s theming of October all these years at being the “Spooky Halloween month” I feel would make Freelancer’s appearance feel weird.
But if it’s not coming out next month, I’m praying to god that they can keep most of Freelancer out of those data files. I don’t want spoilers out there, because I know there will be.

Usually updates are significant of big additions however, so… I hope there’s at least some new interesting unlock or maybe a new halloween-y escalation on the docket next month.
Having it just be ETs, ETAs, and Featured contracts again would feel dissapointing. And I don’t know what else they could add that would be cool as an addition.

Yeah, kinda weird to introduce Freelancer during a theme month (October AND December).

So… November for the win!

I have no hope for Freelancer. Seems way too quiet leading up to it.

Time to release The Trinity Pack pre-order DLC for those who want to purchase it. Also the Halloween outfit (Pumpkin head) from the Hawkes Bay Escalation as an unlockable would be cool.

Also quick FYI Jeff in “Cult Classic” Featured Contract in Sapienza on the XBOX. So please fix that.

Count your not only one i miss ghost mode too

I don’t think we will get freelancer in Oct, because:

So in my opinion Freelancer and Safehouse wouldn’t come suddenly at the Octorber patch if we still have no infomation from IOI before the patch.

Also still want a Ambrose escalation… I suppose Freelancer would be nice too.