Post to begin the discussion/speculation of the October 2022 Roadmap. Will Freelancer finally be coming to Hitman 3, time will tell.

For now, the only known detail is that a patch is arriving early October as per Clemens in the September Roadmap thread. The patch caused the ETs to be reshuffled to prevent one being active, and as they usually release on a Tuesday, it is expected that this will be on October 4th.

Hey all, We have a small update for the September Roadmap. Due to human error some of the dates were unfortunately wrong. We have a patch incoming early October, and we can’t have an active ET running while we have maintenance (The Surgeons would’ve been active). Therefore, the dates had to be shuffled around. The content hasn’t changed, only some of the dates. Almost everything has been moved forward, except the Visit Ambrose featured contracts - they’re now late in September 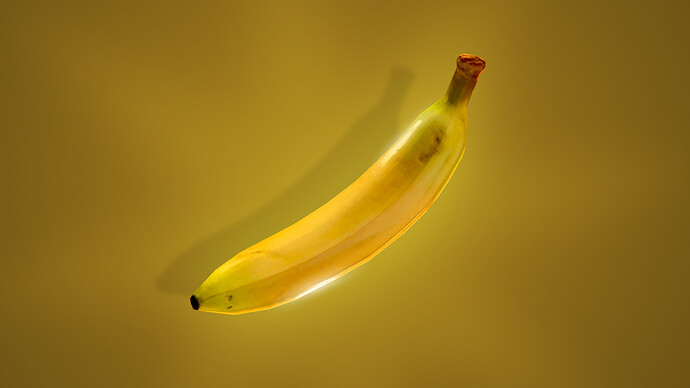 October has arrived and with it comes the HITMAN 3 October Roadmap. It’s the month of Halloween - and what would Halloween be without some tricks and treats.

October has arrived and with it comes the HITMAN 3 October Roadmap. It’s the month of Halloween – and what would Halloween be without some tricks and treats. This month in HITMAN 3 you’ll find 3 new unlocks, Halloween Featured Contracts, two Elusive Targets and more. Let’s take a closer look at what’s to come this spooky October in HITMAN 3. 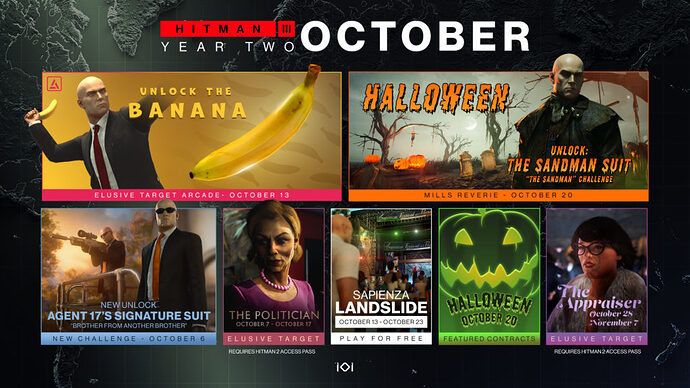 October is not only the month of Halloween, but it also marks the 20th Anniversary of Hitman 2: Silent Assassin. Therefore, you can now unlock Agent 17s Signature Suit. Agent 17 was a real headache for many players back in 2002, and now you can plot the ultimate revenge by wearing his suit.

Complete the new Challenge on Mendoza called “Brother from another Brother ” – and Agent 17’s suit is yours to keep. The ideal choice of outfit for the obedient assassin. With leather gloves, stylish sunglasses and an orange tie, there isn’t another “brother” who could pull off this iconic look.

It’s time to snipe. If you know, you know. 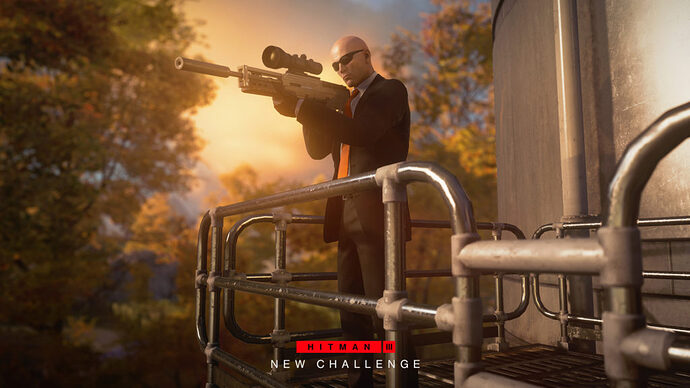 Your target is Barbara Keating aka the politician. She’s back in Hawke’s Bay for 10 days starting October 7. Keep an eye out for the real target because she has a double – and only the real target counts. 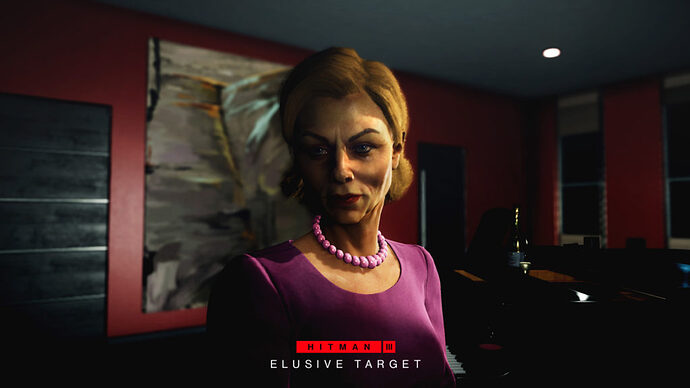 A new batch of Elusive Target Arcades will arrive on October 13, and with it comes an unlock that fans have been asking for. The banana will be a permanent addition to your fruit basket sorry – loadout – if you want it obviously.

It can be thrown, it can be placed, and works perfect as a little snack on longer missions. It is simple – It’s a banana. 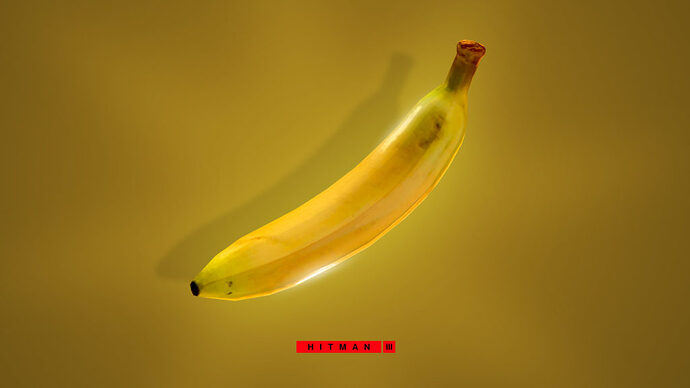 Buona pomeriggio! On October 13 players can also experience the beautiful Bonus mission Landslide 10 days for free! Travel to the little coastal town of Sapienza and enjoy a cozy afternoon with live music and strawberry gelato. 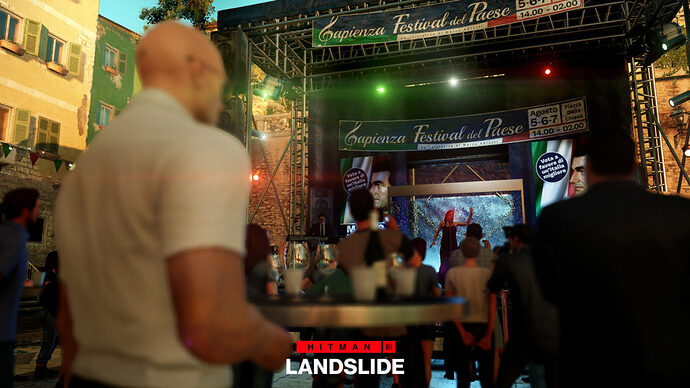 Dare you say “47” forty-seven times? Creep up behind your targets in this rugged, sturdy oil skin coat, with equally horrifying worn overalls and shirt to match… and subdue them to a permanent sleep. It’s guaranteed that no one will dare mention your name again, without thinking of the consequences.

Unlock it by completing the new Sandman Challenge in the Mills Reverie. When completed, you will have the most appropriate Trick-or-Treat-Suit available in HITMAN 3. 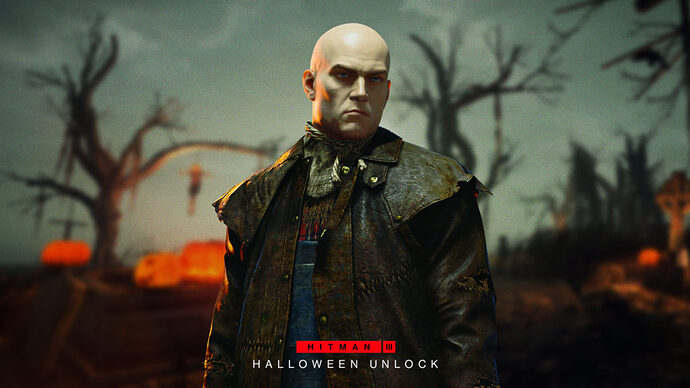 Halloween is upon us, and therefore we ask our community to get creative once again! This time the theme is Halloween. However, they interpret this spooky theme is all up to the creators.

How to get your Contract Featured: It can be based on a super creative briefing, a cool idea or just a plain fun contract. But bear in mind: They have to be inspired by Halloween to be taken into consideration.

Up for a spooky challenge? Click the link hitmanforum and get your submission in before Monday October 17.

Time to trick and treat! 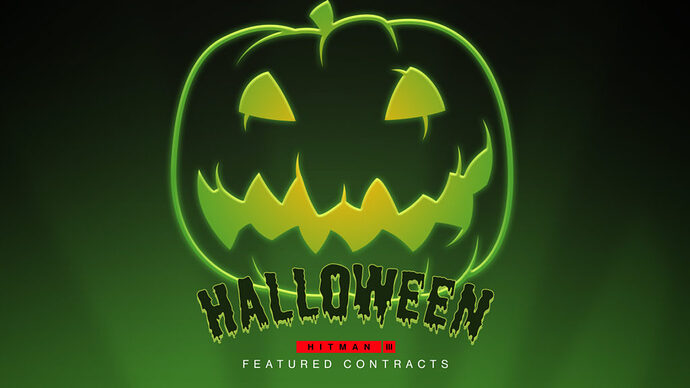 Last stop on the October Roadmap is the elusive target The Appraiser. Your target is Miranda Jamison, famous art appraiser and director at the Gorka Institute in Barcelona. She does anything for a good deal, and we mean anything.

She’ll be roaming the Isle of Sgàil for 10 days starting October 28. Good luck. 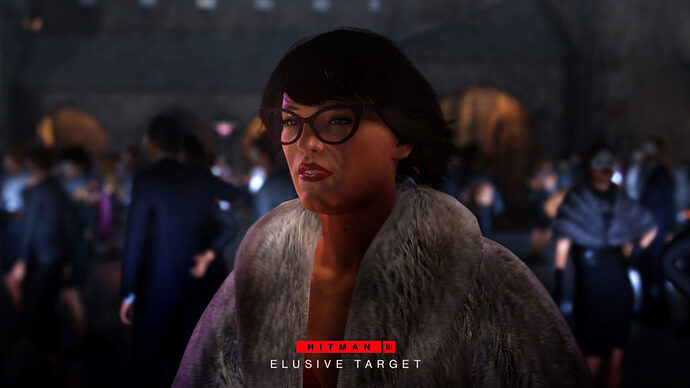 The warlord better return and an halloween outfit

Nothing personal, zomb, but fuck the Warlord; bring me the Fixer!

The fixer alright then rip warlord

I mean, still bring both of those, eventually, but it’s the Fixer I want. I’ve been itching for another go’round with that asshole, I can’t stand the wait any longer.

My only failed ET in H2016. I had just got the GOTY edition in Jan 2018, and the Sensation was my first ET. I was still adjusting and learning the meachanics, maybe if I watched a YouTube playthrough the results would have been different.

I’ve been waiting for his return. “…I was but the learner. Now I am the master.”

The fixer, the fucking fixer! Huh?
Why on earth would you want such a bad Elusive Target
Opinions off, its all good.

It gets too cold for that, wait till summer again.

Will Freelancer finally be coming to Hitman 3, time will tell.

Unless IO breaks previously established patterns, I say yes. We haven’t had patches released in consecutive months for over a year now, so that pattern would rule out November. In fact patches have occurred every three months - so the pattern would indicate either October or January 2023.

Because I’ve never gotten that one right, and this time, with my career reset in H3 from the previous two games, I have another chance to get it right and do it perfectly. It’s personal with the Fixer; I’m gonna fuck him up!

no matter i love you urben

Here’s my prediction, based off the last few months’ roadmaps and the usage of elusive targets:

It ain’t much, but this is about as much as we’ve gotten these last 4 or 5 months.

Too right you are, i hate that son of a

30th- FREELANCER BABY, LET’S GO BABY, DON’T LET ME DOWN IO (I’m pretty sure this isn’t right, but hey, a guy can dream…)

If Freelancer is coming, it will go live immediately as soon as the servers come back up. They wouldn’t leave it dormant in the game for the majority of the month as the dataminers would have everything extracted from the game in a really short time frame.

I don’t know, there’s obviously the data-mining issue, but I don’t think IO would just drop it immediately with no warning. Consider what happened with Ambrose. It was released at the end of the month after lots of teasing and a cool trailer, and it stirred up hype. Freelancer should be even more hype; it was revealed months prior to Ambrose, got its own segment on the Year 2 stream, was updated on its progress in May, etc. If this will be Hitman 3’s last hurrah, I don’t think it’ll just be shadow-dropped. I also don’t think there will be a second patch for this month.
Therefore, I do find it unlikely it will be released this month with such an early patch, but if it was gonna release in October, it would be after a few weeks of trailers and hype. I think all of my predictions will still end with FREELANCER BABY however, just because it gives me a dopamine rush everytime I type it.

hopefully a game update with XeSS since that’s now out