Welcome to the Hitman Forum Awards for 2021!

This has become a sort of annual tradition of the forum, and has run for the last 5 or so years to celebrate the most prominent and talented members in our community!

The regulars have nominated individuals for each category, and been working behind the scenes for the last few weeks to prepare for the voting stage, a process in which the entire forum can participate, and vote in each category.

Voting begins as soon as this thread goes live, and shall conclude on 8th October 2021. On this day, a new thread shall be created to announce the winners!

Good luck to all who were nominated! 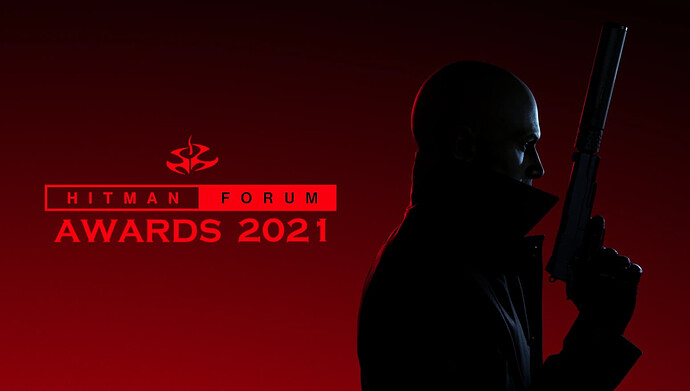 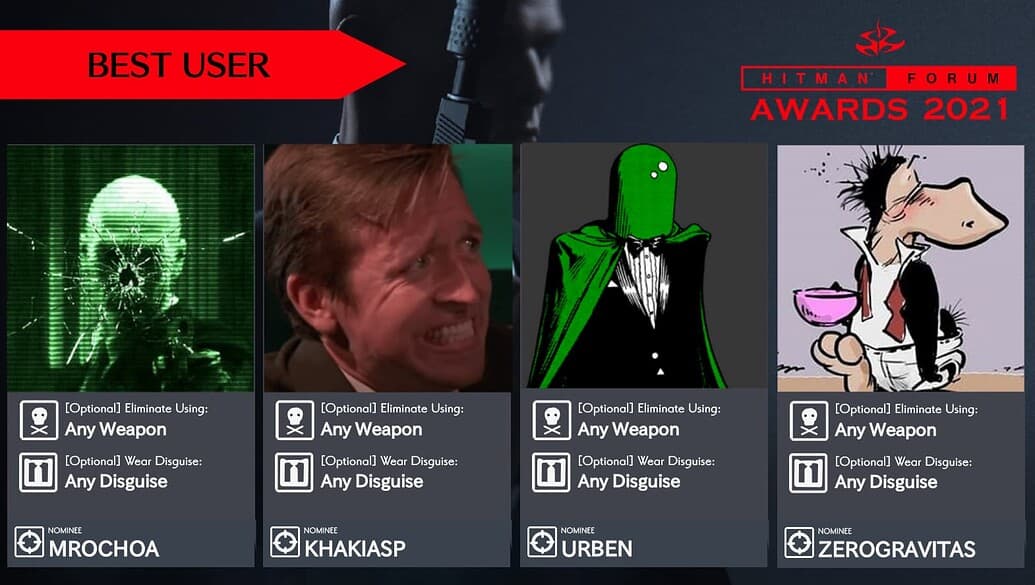 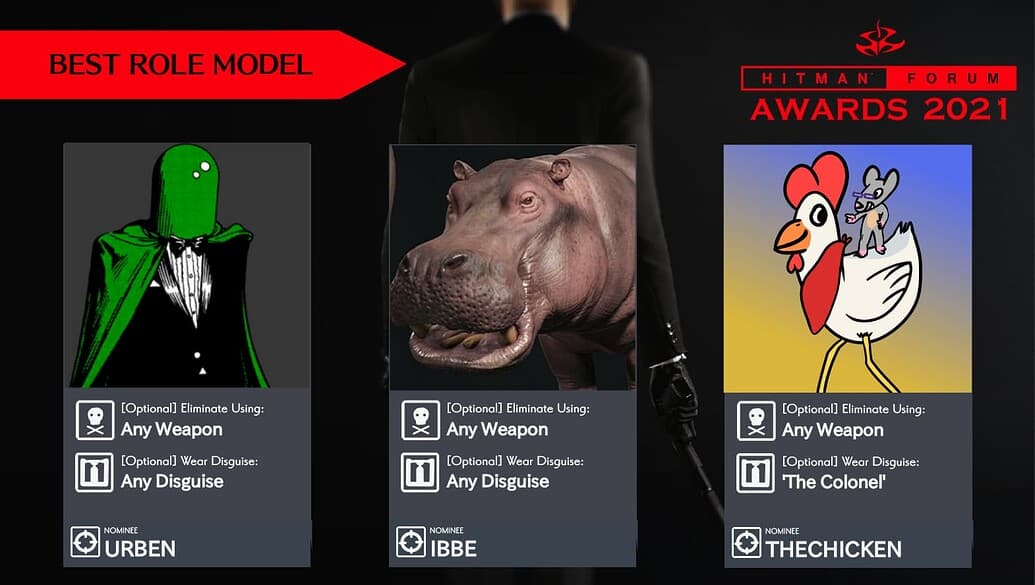 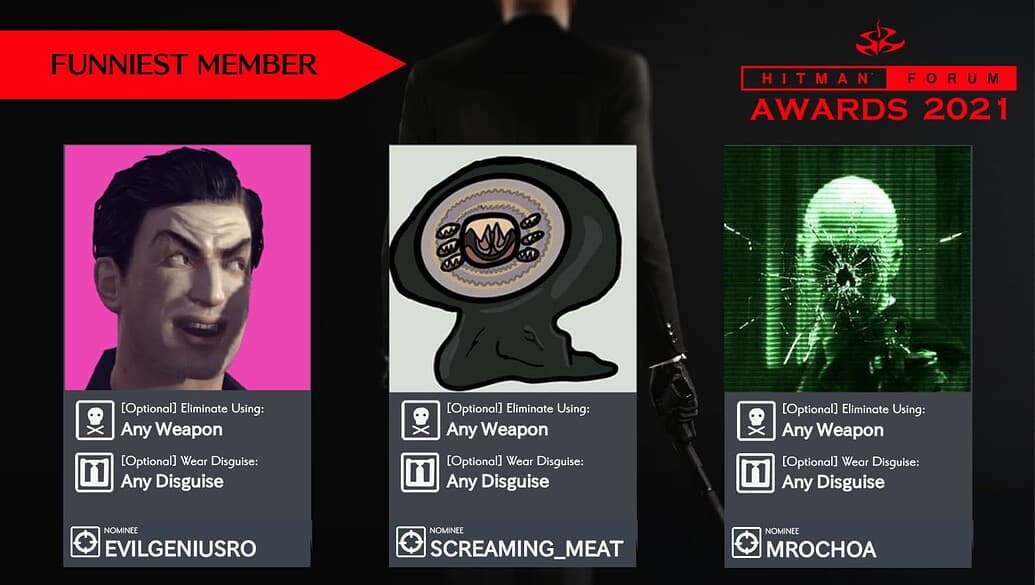 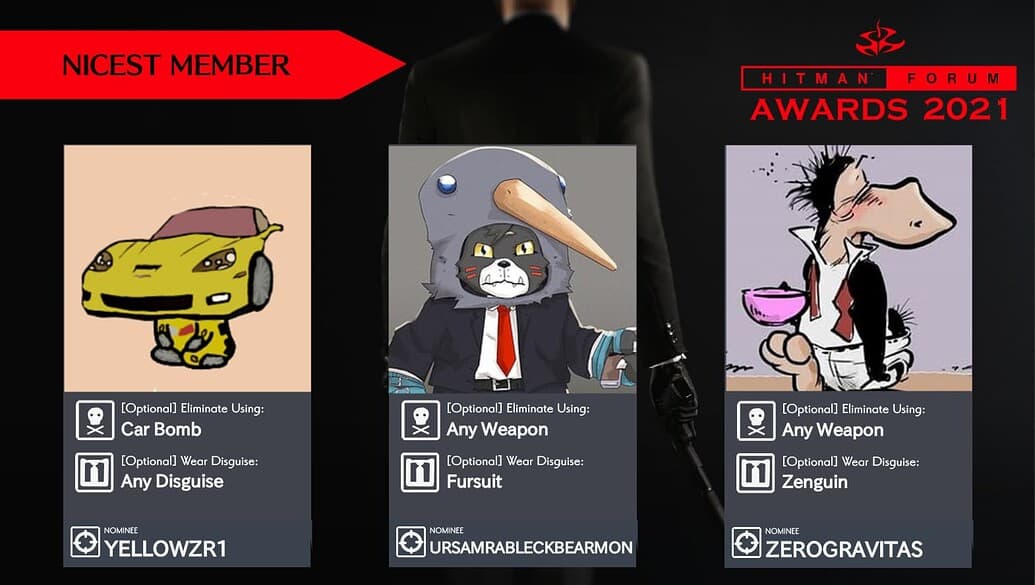 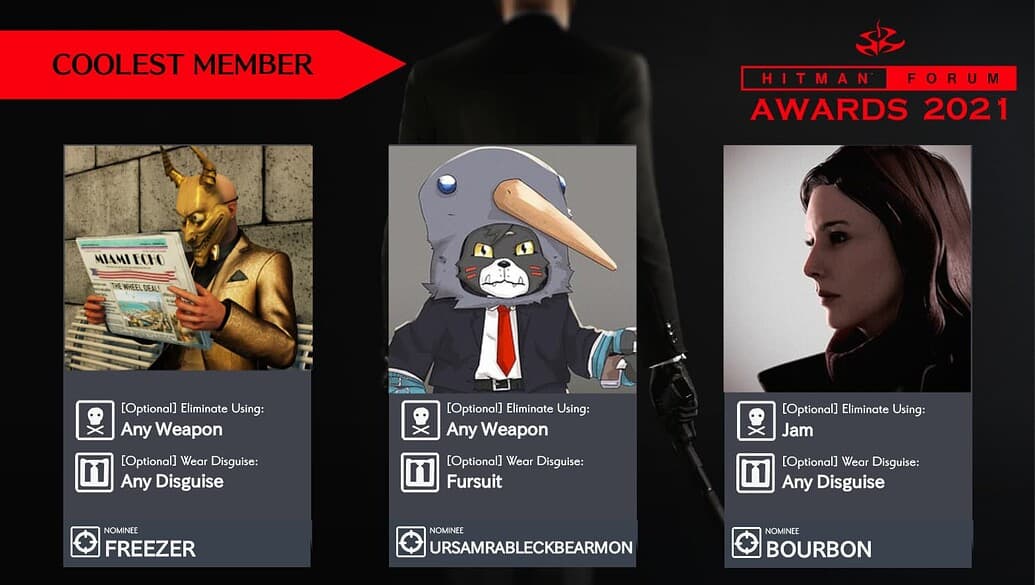 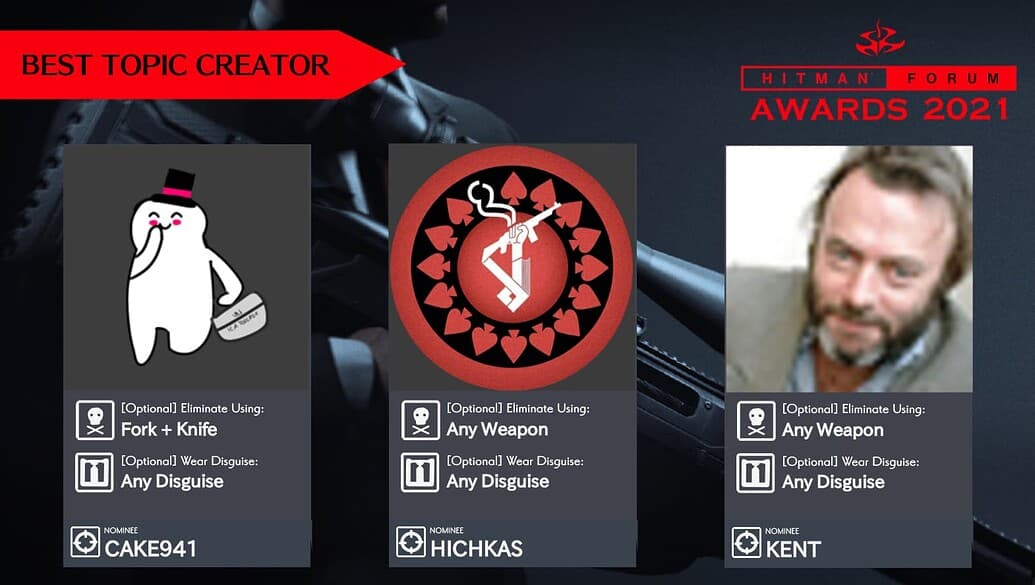 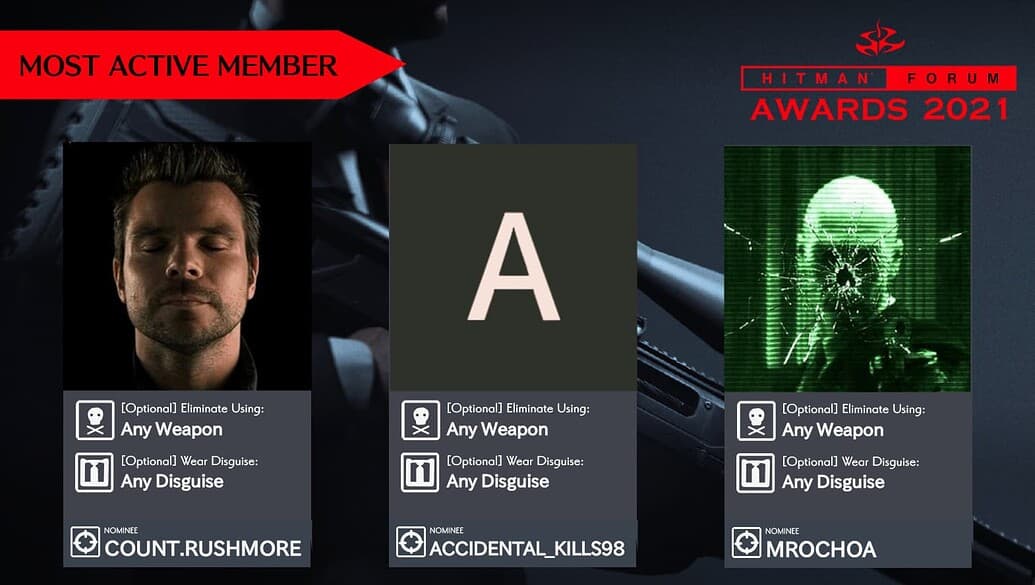 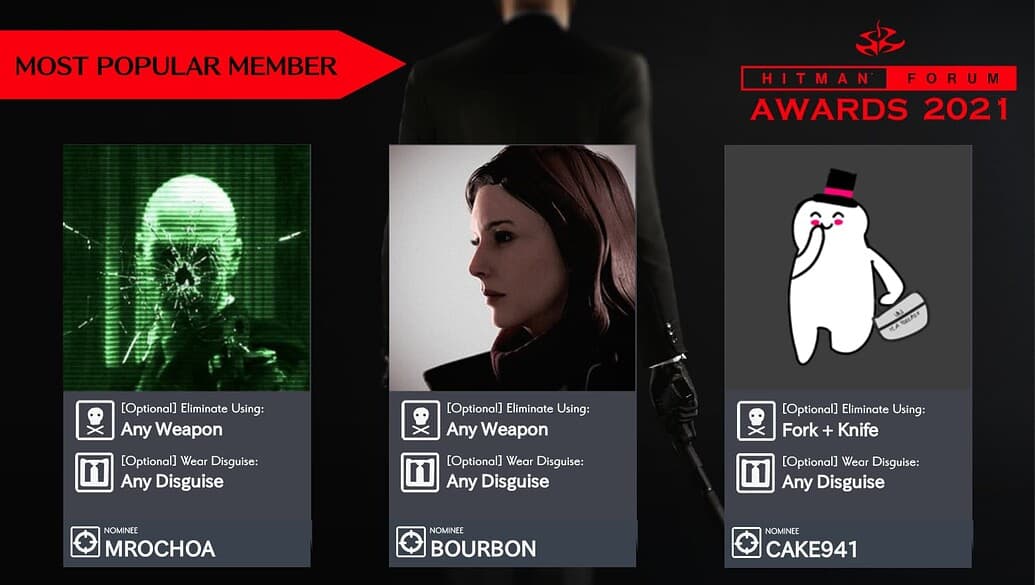 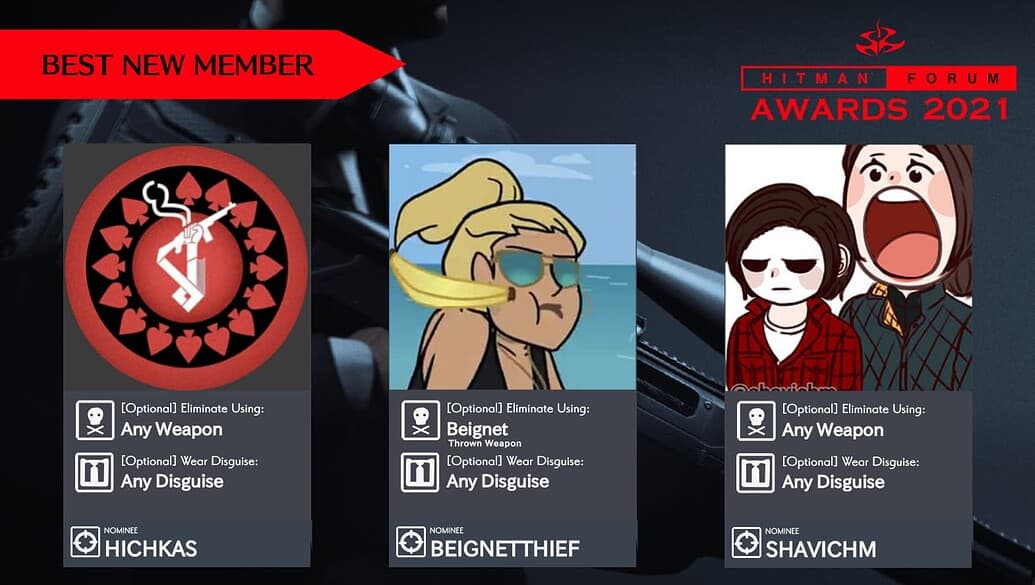 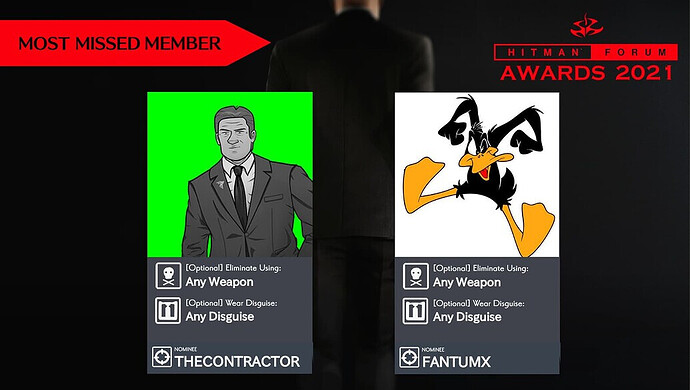 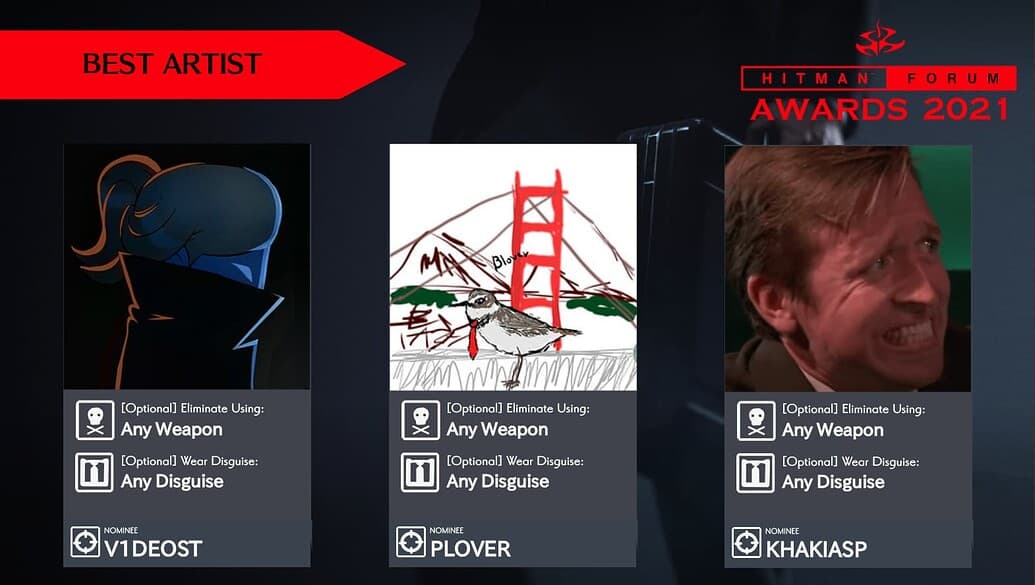 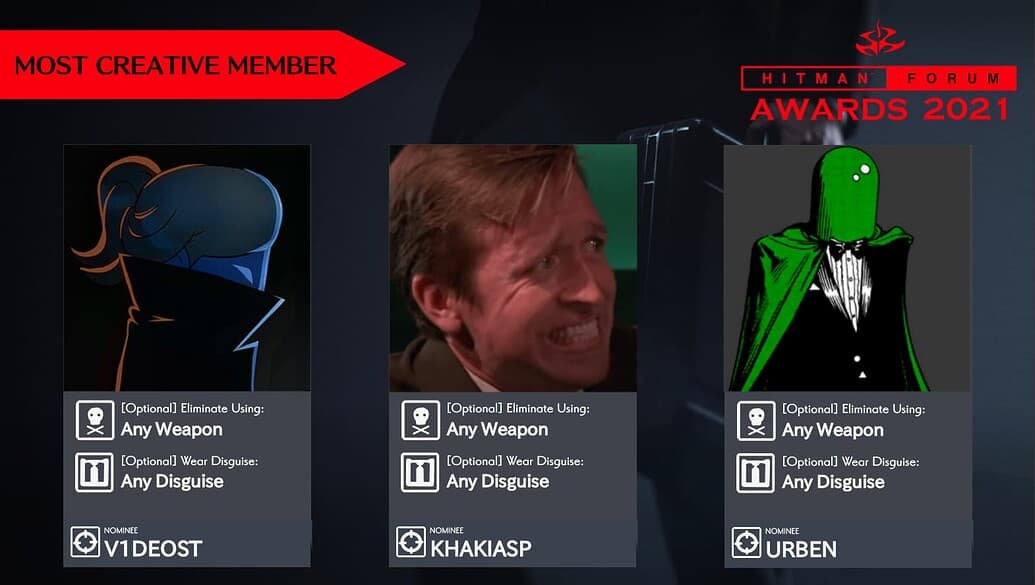 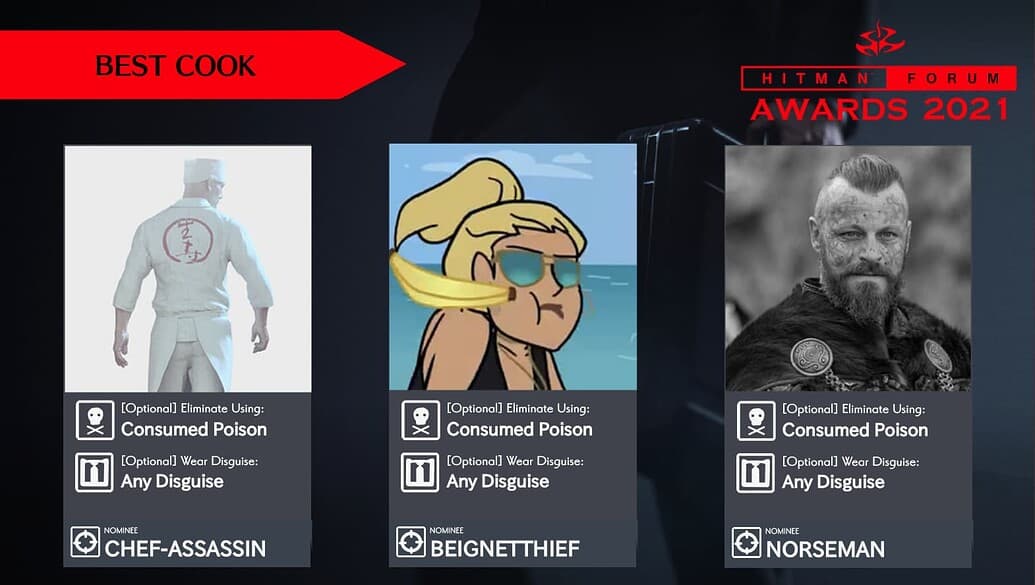 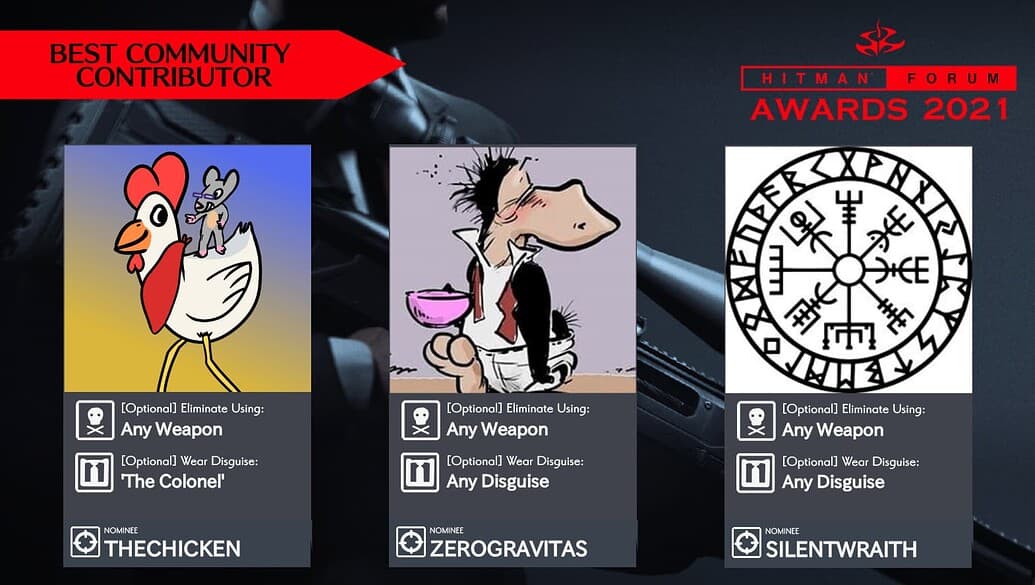 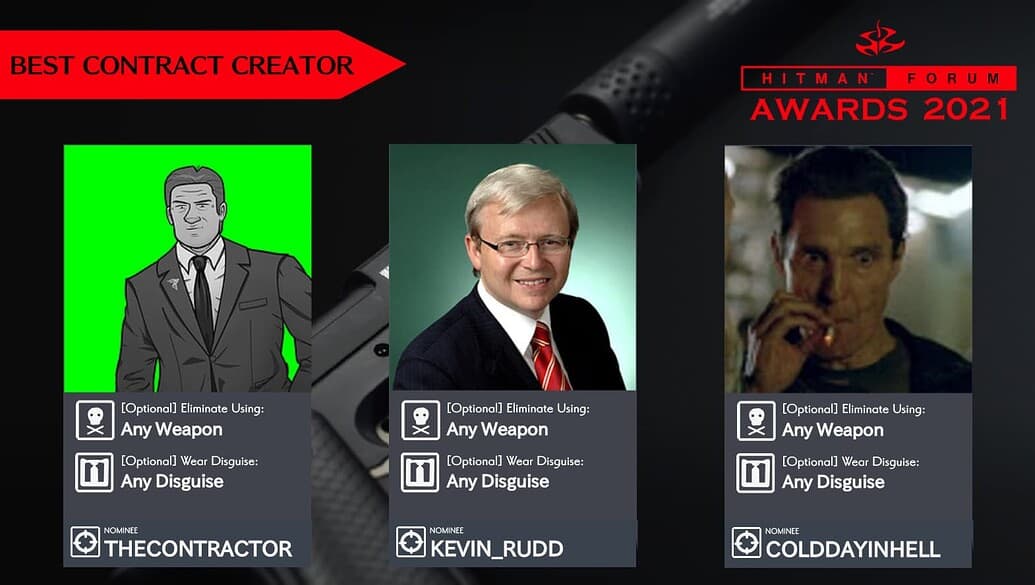 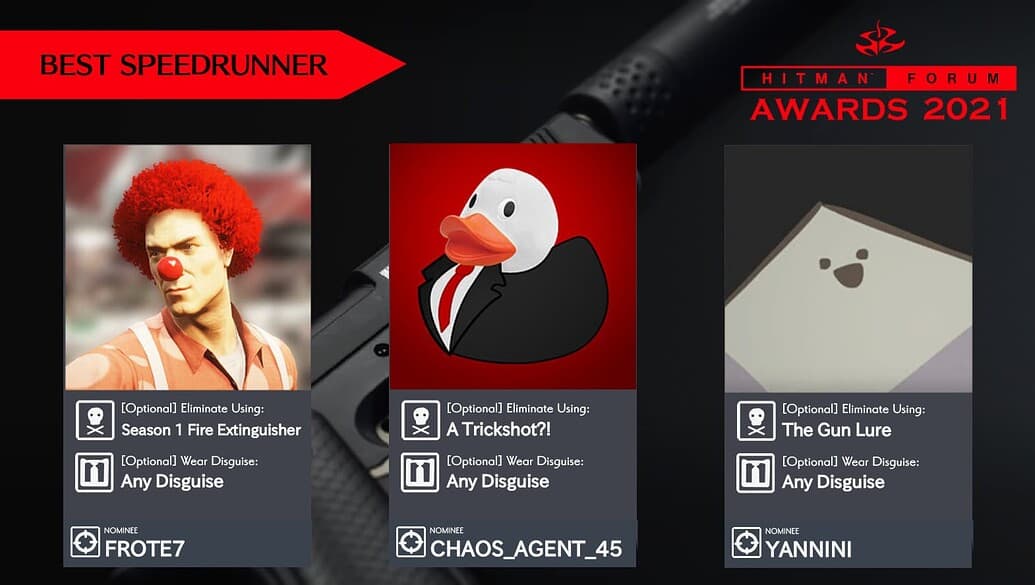 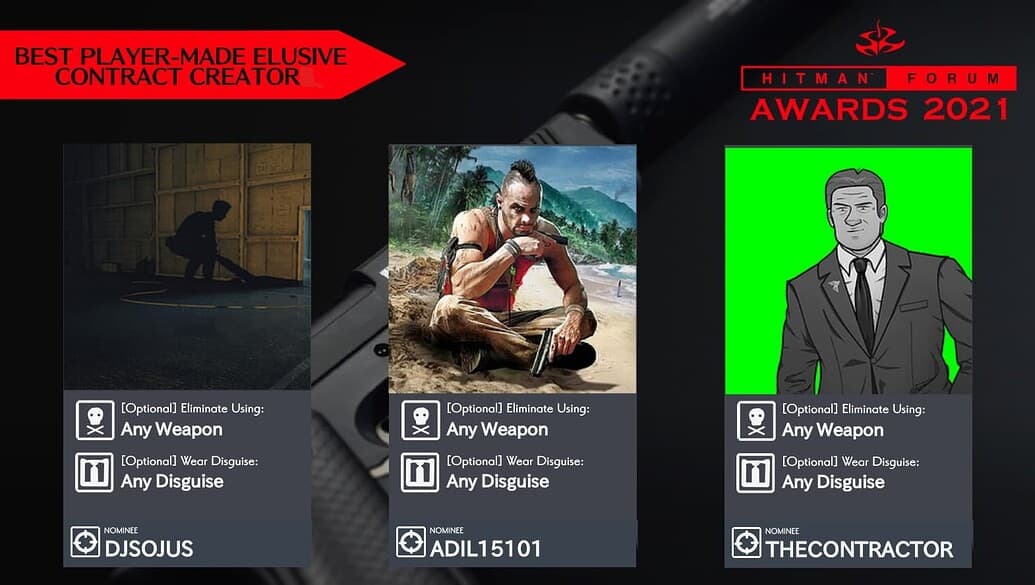 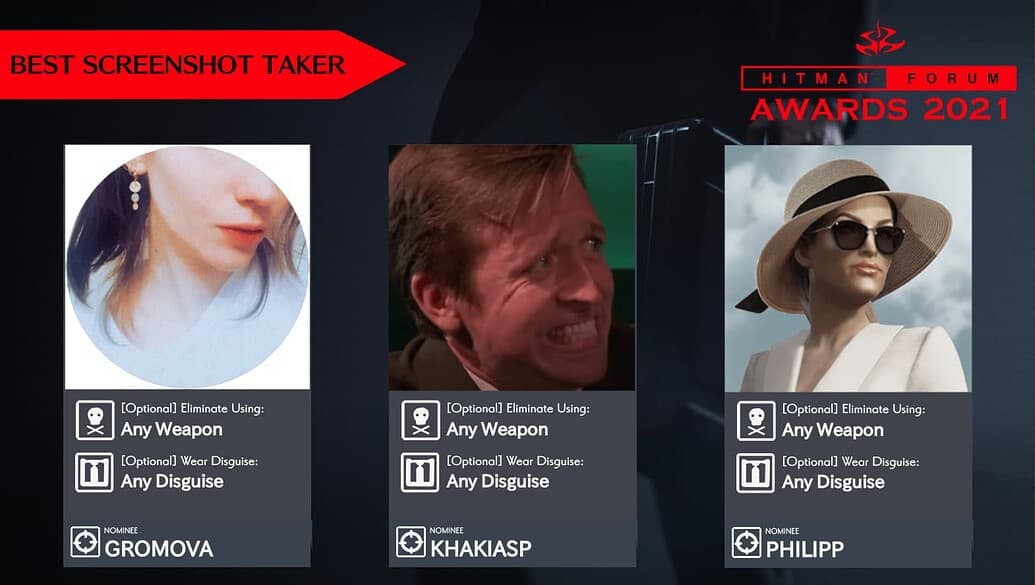 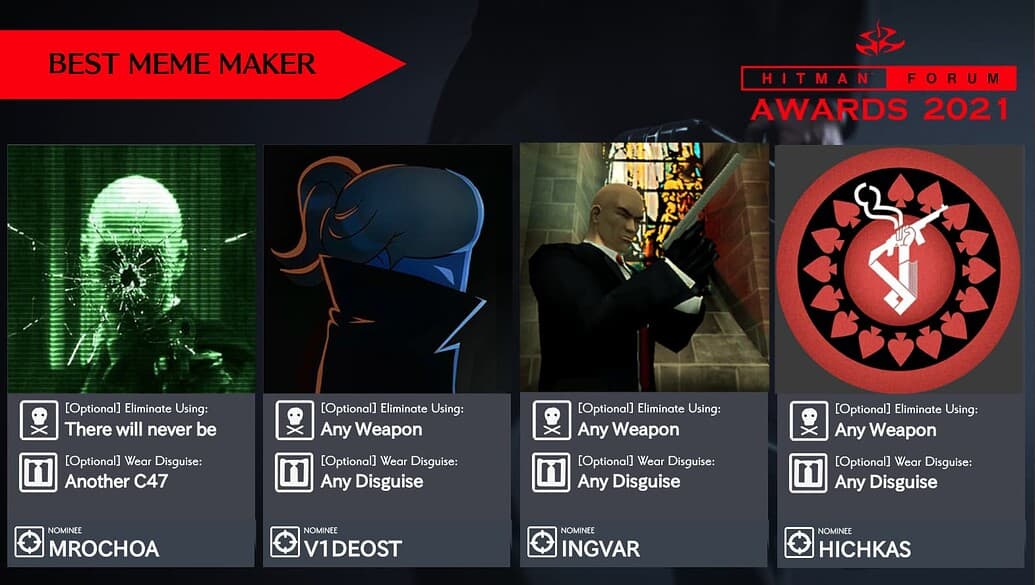 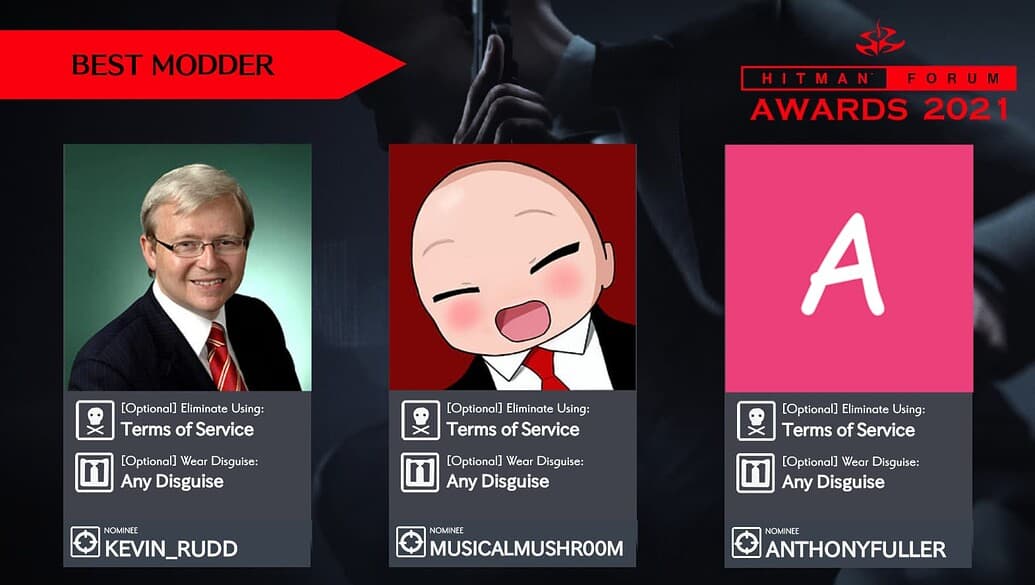 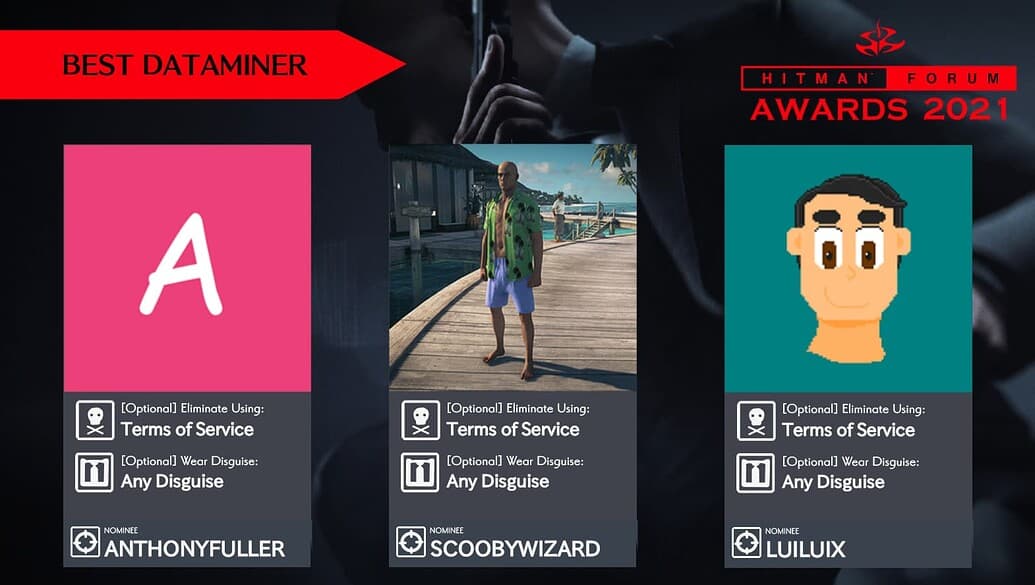 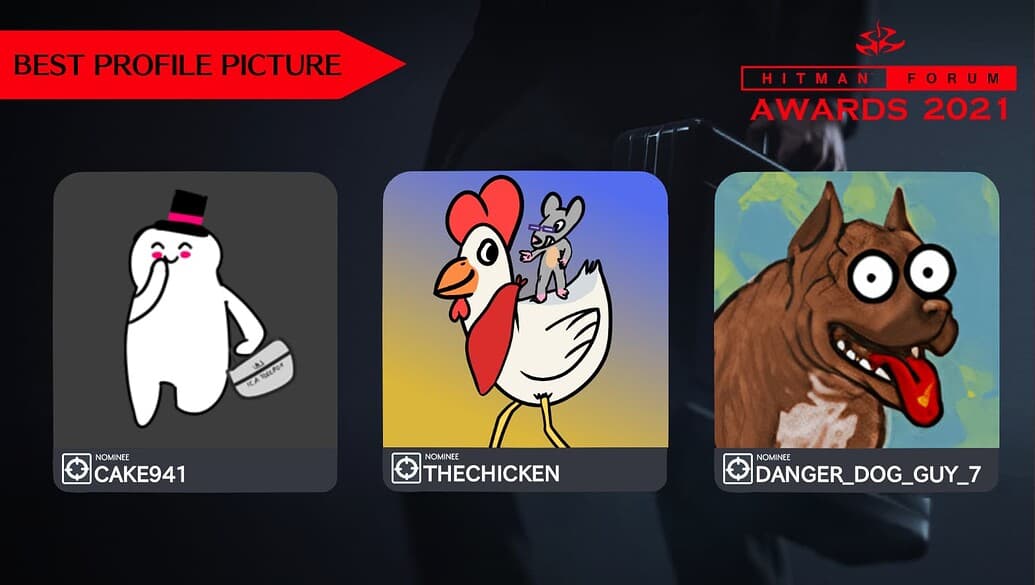 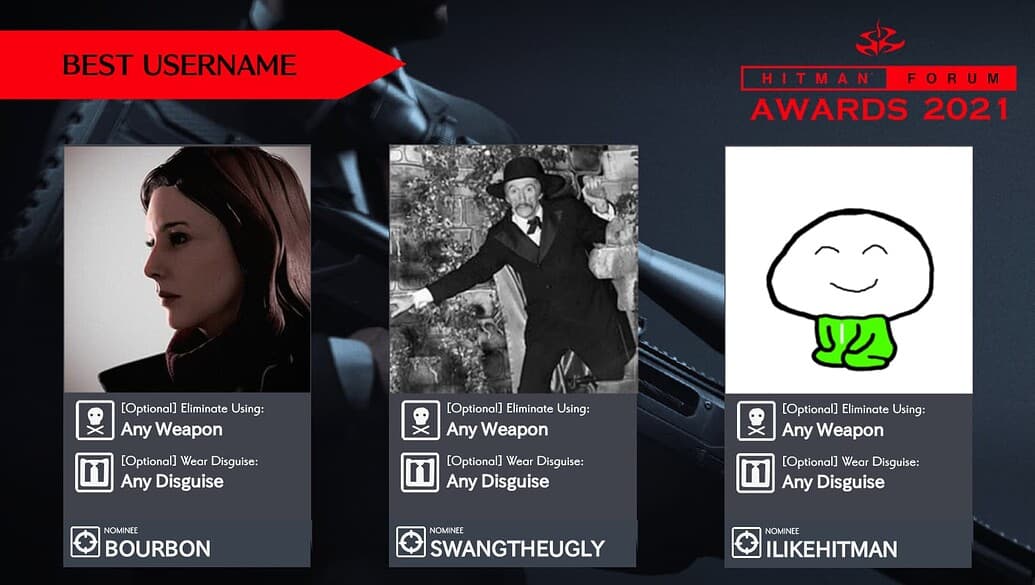 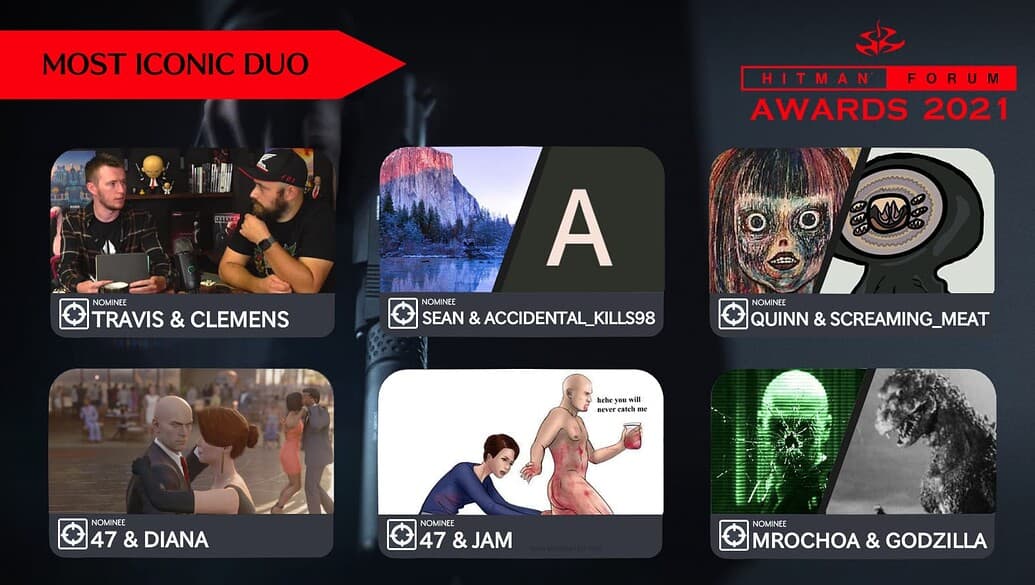 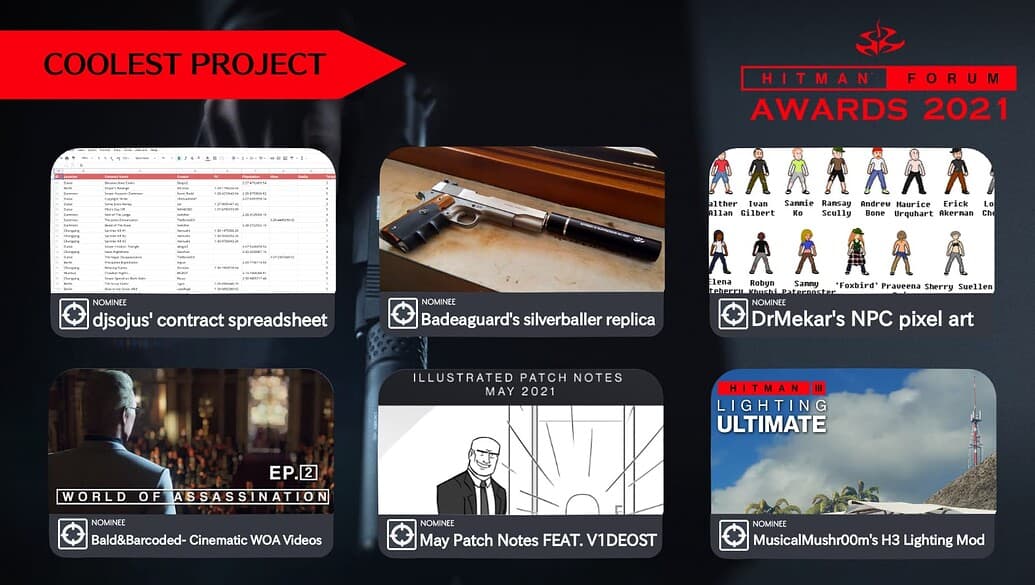 That’s a lot of nominations!

Special mention to @TheChicken for his awesome work on creating the award cards, and to @Hichkas and everyone else involved in making these awards possible!

Just popping in to say that we’re also doing Shoutouts! again this year! Though in a more subdued format.

It’ll be confined to this thread, rather than put in its own place.

If you don’t know what Shoutouts are, it’s a little way to show your appreciation for someone around the forum – whether they’ve been nominated or not.
Write out a message about someone in this year’s listings, or say something about someone you wish was on the nomination list along with the others, and post it in this thread!

Usually, they’re sent via DM to the organizer (in this case, me) and all posted on the day voting closes, so that we get this wholesome wave of positivity and praise to various members who were cool this year, but we don’t need to follow that rule.
Post it yourself now, post it on awards day, whatever you want!

thank you to all the people that nominated me, im super honored to be nominated for more than one category. best of luck to everyone!

Yo you did the hard job, we should all be thankful for that. I just proposed cards and lost the game to thechicken big time

Ah and best new user? I’m flattered by the nomination. Thanks y’all

All I was nominate for was just showing up?

But good job to the card designers and Silent for running the competition this year.

I always get surprised when I see some people’s names at that category because I’ve thought they’ve been here longer.

Jesus Christ, you nominated me 6 times! Y’all are crazy

also most iconic Duo, me & Godzilla?

Thank you all very much, really appreciate it.

I wish all of the nominees best of luck and just wanted to thank you all for making this Forum the very best Community I’ve ever had the pleasure of being a part of!

Special shout out to the Forum Staff, who all do a great job keeping the forum the best Place to be online! Thank you, @Norseman, @Urben, @Bourbon, @cake941, @Kent, @Watson and especially @wincenworks for running this whole operation! i feel like I’ve probably missed some of the Mods, so feel free to include yourself

Technically everyone here’s a new member, since we had to reset accounts for the Forum Migration last December.
I’m- I’m a cool new member, guys! What gives?!

And thanks for nominating me to 3 categories, Regulars! I came close last year to being in a poll, but didn’t make it in.
Glad to see I’m improving as a community member, person, and Artist.

Come on I deserved to at least get nominated for “Funniest Member”.

Also I would like to give a shout out to the forums mods and our wonderful Admin. As well as all you other people who make it so I actually want to come here every day.

Thank you to all the kind people who put my name forward. Once again, I somehow find myself in stellar company.

Good luck to all the nominees and thanks to everyone here for another fantastic year.

Oh come on, no Worst Member category? I definitely would’ve had a chance to get nominated for that!

You can still get worst hitman discord memeber

Special shout out to the Forum Staff 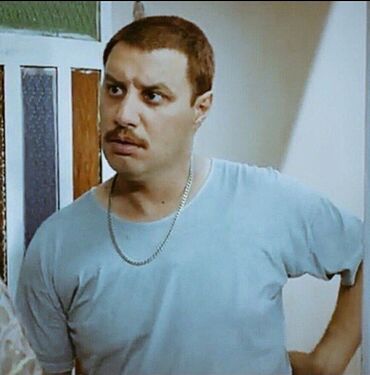 feel like I’ve probably missed some of the Mods, so feel free to include yourself

i knew i was missing some

I think it should be worth noting that we had a preliminary voting period as Regulars recently, since a lot of people tied for different categories, so we needed some ultimate tiebreakers to whittle it town to at least 3 per category.

Here are the people who were so close to making it into each category…
HONORABLE NOMINATIONS GO TO:

This was so hard you guys.

this is so goddamn wholesome. great work @SilentWraith @TheChicken @Hichkas and thanks to everyone for the (and this feels weird to say) nominations. also? i had no idea i was in a duo.

Good luck to everyone who’s nominated