As everyone is aware, the 3.110 patches arrived with a revised Master mode difficulty.

New cameras, new enforcers, old routes now much more difficult if not impossible as they were. Quite extensive work apparently.

This topic is here to discover them, discuss them, list them, see the tricks played on us, the players, and agent 47.

And to give some appreciations towards why we, in the end, are always online and sending metrics : to tell the Hitman Team how to make the levels a living hell to SASO.

Cool! I’ll start. There are no new cameras in Dartmoor.

Seriously though, I’m looking forward to trying this new difficulty mode out this weekend. If I spot anything I’ll try to remember to post it.

Master mode is only impossible to SASO for me if I go for an accident kill while following the HPP. If I stick to just plain assassinations, then it just takes a bit longer. Bring it on!

I don’t really have enough time to do in depth exploration of all the differences, but to start :

I played through the story mission “How The Mighty Fall” in Dubai.

It’s for all intents and purposes a tutorial. It’s also pretty easy to modify into a SASO, so easy that it must be intentional to nudge the player into it. Level Design !
So I think it’s a good start to look around.

So : a camera was added in the corridor of the Staff Area. What was before an easy route for saso is now under surveillance. It’s still possible to avoid the camera’s line of sight with good timing, but since Master Difficulty disables the camera grid, it forces the players to actually look at the camera to know its safe. It’s quite pleasant to do. 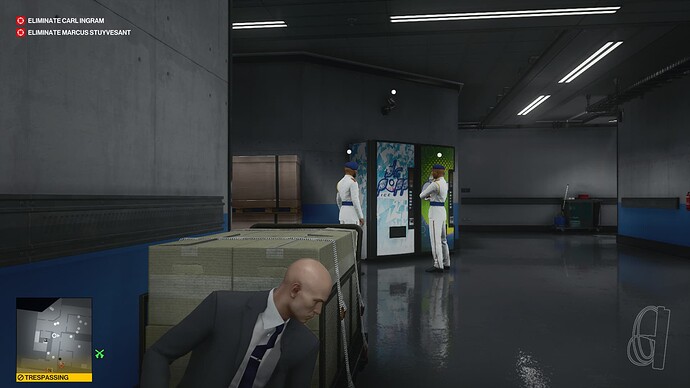 Also, and I think this part is unintentional : if you start with the Meeting Room location you are now automatically spotted at the start of the run. If I understand correctly, the placement/walk in of NPCs at the start causes the door behind you to be open, and the newly added camera spots you directly, even if you skip the opening.

As far as I can tell, the corridors near the Server Room are unchanged. The maintenance staff in the server room will still wait gently his back turned to you. No new enforcer for the Maintenance Staff Disguise, but there is a brand new camera in the Ventilation Area if you continue that route. 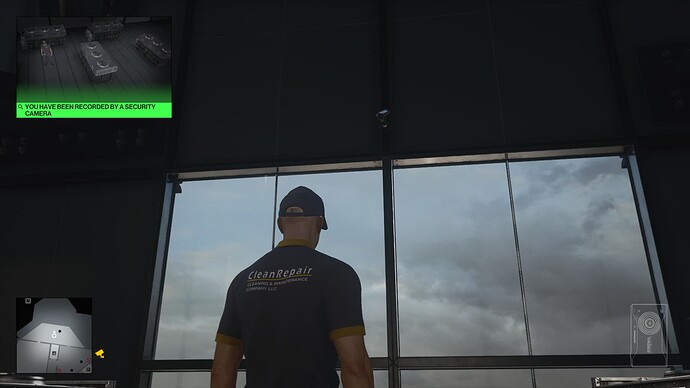 Finally, the penthouse and the Elite Guard disguise. The roaming guard in the Penthouse Reception is now an enforcer, and a camera was added in the entry of the Penthouse. 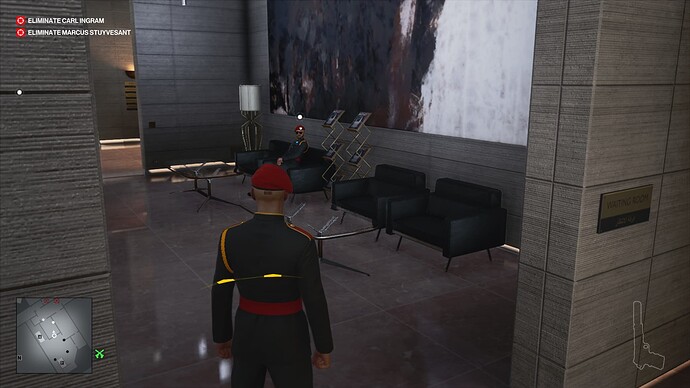 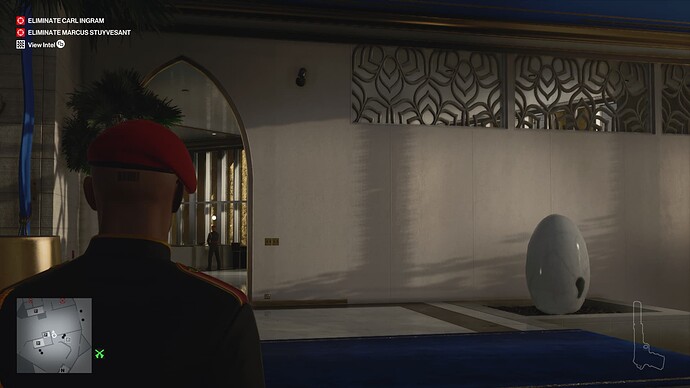 Overall, it’s rather interesting. But I think it’s missing a “gotcha” factor. If I remember correctly, when Professional Mode was made in H2016, the new enforcers/cameras were tailored with the metrics to cripple the most common strategies, and I feel like it’s missing here. Or maybe I just haven’t explored enough.

Currently it feels more like “here are a few more bumps in the usual road”, and not “hey you, I need you to completely change your approach, now”. Maybe because Hitman III level design is in general smoother. I don’t know.

I also did a quick tour of the keys and key-cards around the level, and apparently they are all still at their usual place. And not, as it was done in Professional Mode/Master Mode in H2016 in the pockets of chosen NPCs.

Part of me was hoping for the same level of change made for The Ascensionist ET : new NPCs, new routines, a bunch of gotcha. But I also understand that doing this for all the maps could have been too much.

Will need to look at the rest of the maps to give a good assessment of the changes.

Still fun and novel to play though

I’m tagging @Clemens_IOI for the Meeting Room start automatic spotted. Because I think it’s unintentional and could be frustrating for some players. (even if I have no idea how it could be neatly resolved looking at what happens). remark do not apply if intentional, sadistic

I didn’t know they were revising this mode like they did with the 2016 game. Has anything been done for Master difficulty for the 2018 content?

The Master difficulty was equivalent to this sort of change from the release of Hitman 2. Since the start it came with new cameras and enforcers.

The only difference, as far as I can tell, is that the Master difficulty for Hitman 2016 (then Professional difficulty) was born from the metrics received by IOI, and was created to be a counter to the actual common strategies used by the players.

Master difficulty in Hitman 2 map was created at the same time as the rest of the game and has more of a “run of the mile, not tailored made, but we are still good designers so expect a few bad surprise for you” aspect to the change made to the level.

No new changes were made to non Hitman III content in the patch as far as I can tell.

Also, both Ingram’s bodyguards are now enforcers to the penthouse guard disguise. Didn’t try with the penthouse staff disguise yet.

There is also an additional camera above the door to the penthouse, the one near the elevator close where Marcus begin his route at the start of the mission.

On Dartmoor, the detective disguise is still enforcer free, but there are new enforcers to the gardener and outside guard disguises.

A quick travel to the land of Tango, to Mendoza.

It’s really not exhaustive, I just wanted to check what I thought would be “obvious” (for me) changes to make master mode interesting. Some are here, some not.

There is now a camera above the back entrance of the tunnel. 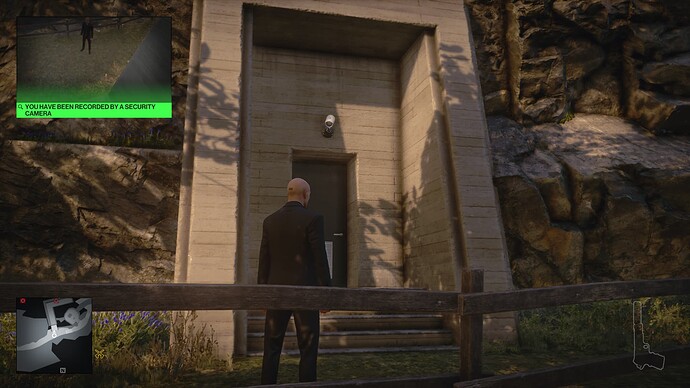 Don Yates is now a good boss and now knows the faces of his employees. He is now an enforcer to the Mercenary disguise. (this should make the “save Diana and wait for him interesting”) 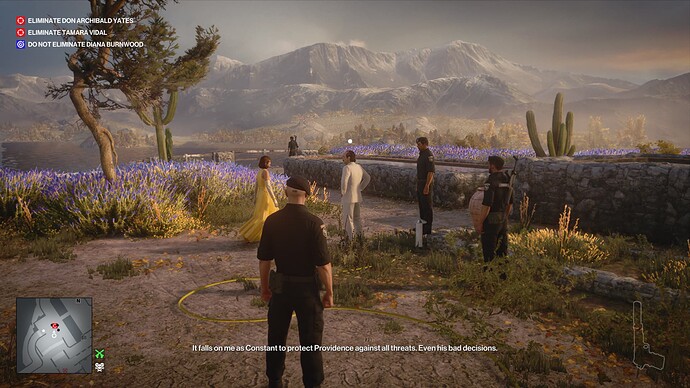 On the “what I would have expected” side, there are four items that trivialize things in the level. They are all still here in Master difficulty : 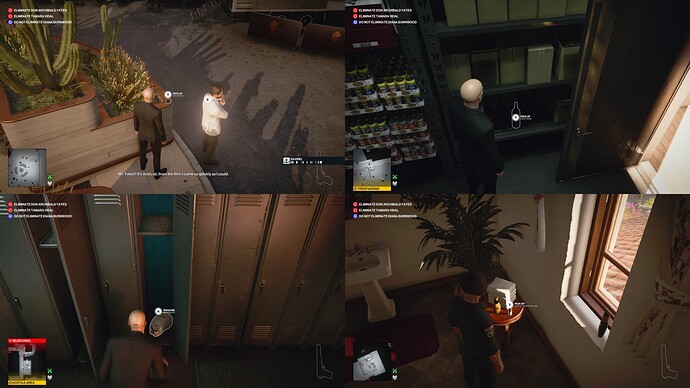 Each of them, removed, would have made the difficulty not higher per se, but much more interesting to replay. It would have given some twists to the level.

In general, I noticed the master mode on H3 maps it’s limited only on additional cameras and enforcers, but everything else in the map remains unchanged: differently from 2016 and H2 maps, items and free disguises are no more deleted or moved, and there is no additional Npc, and neither replacement of those already present on the map. Master mode on H3 is just a bit more challenging, but it’s a far cry of the general remix done on the older maps.

Also, and I think this part is unintentional : if you start with the Meeting Room location you are now automatically spotted at the start of the run . If I understand correctly, the placement/walk in of NPCs at the start causes the door behind you to be open, and the newly added camera spots you directly, even if you skip the opening.

Geez… IOI sure has some weird sense of humor.

Or is it just Haven Island? Or have they done them too?

Also, why would they not add cameras to Dartmoor, it’s the one location that’s in dire need of them

BC it’s an old English mansion. No cameras! Alexa doesn’t want eyes in her place or records or even staff that talk lol. It fits the storyline even if it hampers the gameplay just a tad.

I can understand no cameras inside the house, but there probably could’ve been cameras outside the house, maybe even at some of the gated entrances (the main gate and just before you enter the main yard). For on the house; near any entrances where the player could potentially sneak in (windows, and pipes that are climbable).

For the gated entrances the player would probably just avoid these anyway if it meant getting spotted on camera - so why bother? Well, it could be for more realism/believability.

Of course, it’s too late now.

But if they did have cameras, that’d mean they’d need a security hut where the (VCR

) could be found. Or one of the Rms inside the house. The small area where the 2 guards are that can hear sounds inside the nearby bathroom seems like an appropriate area. In fact, it’s this way in the DGS (minus any camera related equipment).

Re: the new/added stuff. I’ll have to give a try now. Not that I really want to. Since some of the ETA is having you start out with a restricted loudout - I have been trying a few things with no loudout. Let’s see what my gaming limits really are.

I think they could’ve added cameras in the outside premises at least, if not inside the mansion. Don’t know how much that would affect the gameplay though.

BC it’s an old English mansion. No cameras! Alexa doesn’t want eyes in her place or records

The secret Ark Society however…

If I remember correctly, when Professional Mode was made in H2016, the new enforcers/cameras were tailored with the metrics to cripple the most common strategies, and I feel like it’s missing here.

Currently it feels more like “here are a few more bumps in the usual road”, and not “hey you, I need you to completely change your approach, now”.

Yes. Just like in Paris where players would easily find that route to get to Dalia’s bathroom through the windows. They added new npcs that changed our strats and not just add a dot over the head to the current npcs already there.

a Pinot Noir bottle is still waiting just next to the bar, as unsupervised and easy to take as ever

Is that the small room with the fuse box?
Just played the Iconoclast and it’s a Maelbec in that version at least, which seems to be rarer than the Pinot Noir anyway.

Exactly the one.
During the Iconoclast, all the Malbec and Pinot Noir bottles are reversed. It’s the same challenge of “find a bottle serve it to the target”, but with another wine.