This can’t be good…

Yep… learned about that yesterday, I hate how it happens so many times

I’m still away at “work” and I have not had the chance to download or play this particular game yet due to being “in the field”.

What does this news possibly mean for the game’s (& studio’s) future? Any chance of a console release?

I’m completely out of the loop, so any help or insight is greatly appreciated.

We don’t know yet but it could mean that the game is going to be abandoned or relayed to another studio, it’ll still be available on the internet at least so you could play it via emulator, and I doubt it’ll release anywhere else since SE Montréal was known for mobile games, it’s pretty sad for the devs though because we also don’t know what might happen to them

Situations like what Onoma / Square Enix Montreal are going through are why I’m glad IOI is independent now. 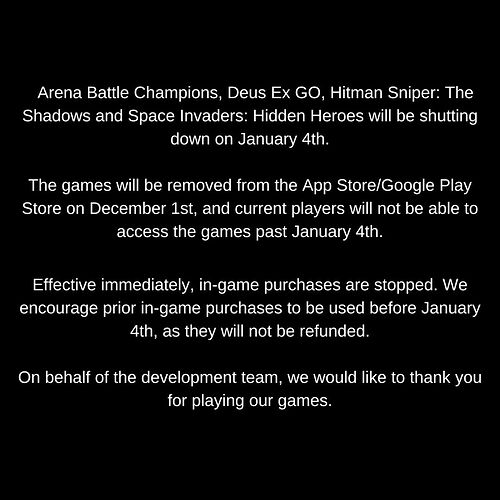 And this Hitman Sniper game has just only been released after seems like a long and diligent development.
I wonder what’s going on here

SE stands for Sucks [at] Everything.

Well, shit. I only got this game a month ago and now they’re killing it off. I never got to unlock Kiya but at least I finished the campaign. I wonder If someone might find a way to save it.

On side note, I was checking this threat and noticed that there was supposed to be a yacht map. Was this ever released?

For the record, this is an Embracer Group decision.

Square Enix sold off their western studios in August. Which seemed like good prospects as SE Montreal was rebranding as Onoma to make a new name for themselves. But as we know now this didn’t shake out for whatever reason.

So next year the games won’t be playable anymore even if you have installed them? Is this an online only thing? I hope customers can get a refund.

And just in case I downloaded again Hitman GO on my ps4.

Very very sad to see this…

Those games mentioned in that tweet will be delisted December 1st and shutdown January 4th. As for returns, those would have to be handled by the app store the games were purchased from and I doubt they’ll offer any.

They didn’t mention Hitman GO or Hitman GO: Definitive Edition being delisted. I’m guessing that those games have had their distribution rights reworked when IOI went independent.

Hitman Go, Hitman Go: Definitive Edition and Hitman Sniper are still published by Square Enix. That is what the store pages currently say, at least. (Which I assume will change soon)

I think they didn’t mention other titles because those are playable offline. I don’t know about other titles, but The Shadows won’t even launch without an internet connection, whereas Hitman Sniper can be played without one.

I bet that Knight and Stone characters was Square Enix idea

They were made for Hitman 2, which was published by WB Interactive.

While the characters were likely created by IOI, the initiative for multiplayer was probably a directive of WB.