How to let the doctor meet Janus?

It’s said to be part of the challenge “Elderly Assistance”. You’re supposed to scare the birds/ducks away by throwing something at them, then the doctor by the river would leave the place and go to Janus’s house.

But I just couldn’t make it happen. First of all, there’s no duck or bird around the doctor by the river. There are some birds around but far away (some are cross the road). And second, I tried dozens of times throwing things everywhere near the doctor - some to his back, some by the river side and some into the water, and even nearly to the other side of the river, and none of it drove the doctor away. He would quickly get back to his pose and kept on talking to birds (though you can’t see any).

I played this level through Hitman 3 on Epic Game platform, and I can’t figure out how to deal with it.

There is a flock of ducks swimming in the lake a bit opposite the doctor.
You better wait till he activates his route and starts to speak with those ducks.
It might be that before he starts that ducks are not there and they appear when he does that.
When you see swimming ducks just throw any object in their direction, they should be scared and fly away.
That’s the trigger that makes a doctor go to Janus’.

I don’t know why you can’t see the ducks, but in case they are still there but not visible, here’s the reference where you need to throw an object 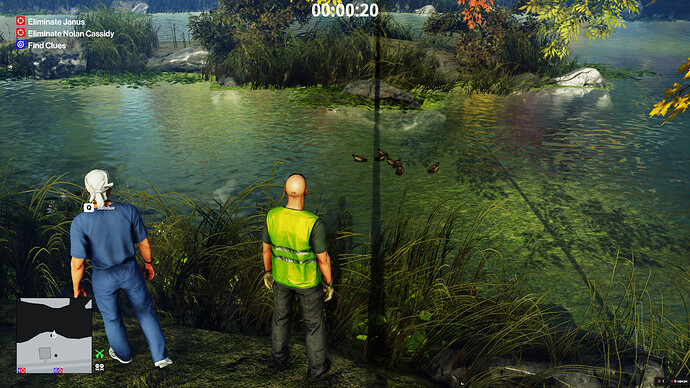 Thank you so much, my friend. I’ll have a try.

Magically, when I restarted the game again, the ducks were there! I guess it was a bug in the beginning.
Thanks bro!

I bet so. Sometimes I don’t see the ducks there either

I swear they were there in H2.