How were we intended to play Bangkok (Club 27)?

Since playing H3 I’ve gone back to replaying some of the old missions from 2016. One thing I’ve noticed is that IOI have made massive improvements to the flow of the levels as in the multiple pathways they intended for us to be able to play through them as well as coming up with our own in the newer games.

The craziest thing in 2016 though is at times it leaves me thinking - “What the hell did they expect me to do here???” And Bangkok is the best example of this. The biggest problems with it for me are the security system and enforcers which make the level much more awkward than it needs to be.

Almost every opportunity we have in the mission takes us past some damn security cameras so we then need to delete the evidence which is another level of awkwardness because the keycards also need disguises to pick up easily…and there are very few places to pick up specific disguises in this mission…and some of them are far out of the way.

IOI removed the option to be able to delete the evidence in the shack outside years ago which was a very poor decision and almost every disguise we pick up where you would think it would make perfect sense to wear results in enforcers all over the place.

Just seems like the kill methods and general flow of this mission are the most poorly designed in the series because these aspects became amazing in Hitman 2 and 3. I mean when they were playtesting this mission how did they imagine we would complete it?

All the ways I can remember…

You can shoot the cameras out, you can cross the atrium roof, there’s a pipe to climb on the outside wall of the hotel, the basement is your friend for a fairly easy costume and master key card (just clear out the laundry room or use a distraction). I also think the chef costume allows you get past the guards. You can flirt with the film star to get access to her room which has a crew costume in it. Then there is the bug sprayer opportunity and the drummer bit and the vegan cake too.

I wish there was some way to delete the evidence suit only. I hate shooting out cameras because I like to play the game as I would in real life and a shot out camera would cause suspicion

If you want an easy way to get a hotel staff uniform, check in to the hotel room and call room service. Or drop a gun in your room and throw a coin to get a guard’s attention, wait until he is in the room and subdue him. The best way to get the master key card is to wear a guard disguise as you pick it up since it is not a suspicious action.

You can do the laptop kill suit only, it just takes a serious amount of work. You have to get to the drain pipe past all those crew guys, but it can be done.

I forgot about that. It is risky to do but when in Cross’ suite, you can go up the stairs and either lure Jordan into one of the rooms with a distraction or confront Jordan Cross with the tape.

I think the canon way to kill Jordan Cross is to disguise yourself as the drummer. Check in the to hotel and go into your room. On the balcony, there is a drainpipe. Climb down the drainpipe when no one is looking and hide in the empty lounge. You can distract the drummer as he is on the balcony into the room. Throw a coin and get his disguise. Then head to the Jordan Cross wing and approach Jordan Cross. There will be an opportunity where he will go to the atrium and you can push him off.

I always got the drummer clothes by rat poisoning his drink. It’s tight bc the wall behind the bar is slightly more slender so you have to be careful when you subdue him and put him in the freezer.

I wish there was some way to delete the evidence suit only.

There is, although I can’t remember it fully, since it’s been such a long time since I’ve played Bangkok… but here’s what I remember.
Start at 47’s suite, somehow get to the laundry room, get the master keycard, go upstairs to the security room, wait for the chief guard to look at the other computers and then delete the evidence.
When it comes to getting to the laundry room, I don’t know how I did it, but I found a method that worked flawlessly. I don’t remember how, but I do remember evading the pest control guy to do so.
When it comes to the security room, it’s much easier than you’d think. The guards using computers can’t spot you if you’re crouched, so you’re safe there. The chief guard frequently checks the other computers, so you won’t be waiting for too long. I also don’t fully remember this, but I think he first checks the computer to the left, then to the right, and goes back to the main computer (this is all from the main computer’s viewpoint).

As far as he is a singer, I think the most canon way is a Branson MD-2 being electrocuted

One way you can get the evidence is by shooting a fire extinguisher north of the room and making them investigate. Then you can go in and do it.

Annoyingly too, you can’t use the EMP from outside the room or get a guard to carry it in within a briefcase. The Security Box is just too far into the centre of the room. So you pretty much have to enter the room to destroy it 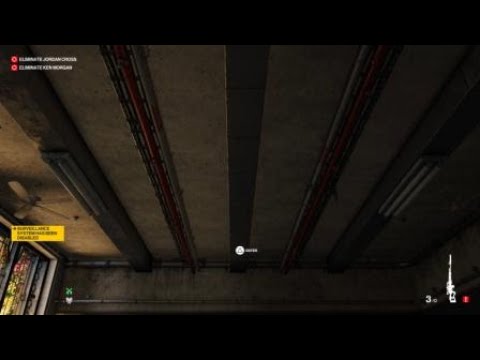 Uses the Druzhina’s wall piercing though, which might get patched out today

All the ways I can remember…

You can shoot the cameras out, you can cross the atrium roof, there’s a pipe to climb on the outside wall of the hotel, the basement is your friend for a fairly easy costume and master key card (just clear out the laundry room or use a distraction). I also think the chef costume allows you get past the guards. You can flirt with the film star to get access to her room which has a crew costume in it. Then there is the bug sprayer opportunity and the drummer bit and the vegan cake too.

I wish there was some way to delete the evidence suit only. I hate shooting out cameras because I like to play the game as I would in real life and a shot out camera would cause suspicion

Basically I just have a lot of hate for this level but love every other one (almost).

Here’s a suit only run I did a couple of years ago although it could probably be better because I’ve replayed the level a thousand times since then ha. I try to play ‘realistically’ like it’s a movie so sorry about all the slow walking:- 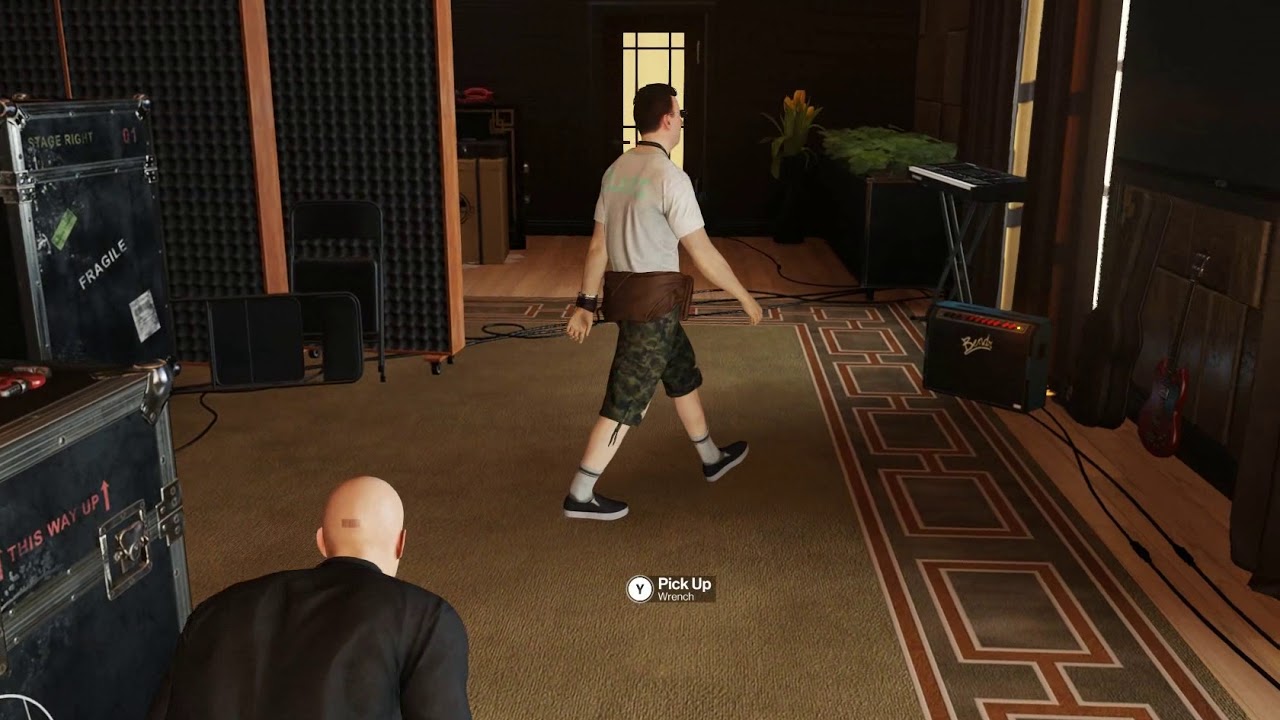 I’m currently doing some canon style playthroughs of each level and it seems based on what Heidi says in Miami here (1:24) that the canon way was to dress as Abel Da Silva:- 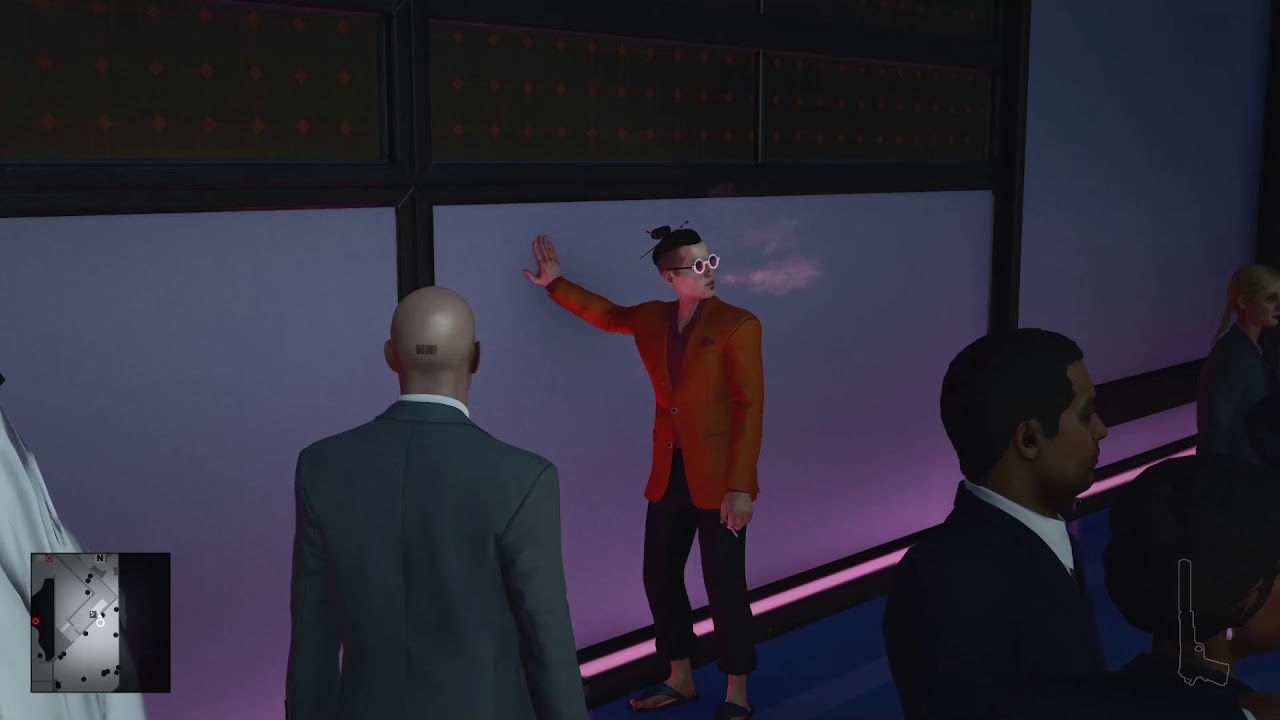 It isn’t my favourite method though. The strange thing is she says that Abel “woke up in the hotel room” which means 47 likely knocked him out in the lounge rather than rat poison in his drink and stuffing him in the bar fridge.

Is the Branson MD2 method ever mentioned elsewhere Count? Like does anyone ever say that is how he died? Just because the canon is something I’m quite interested in

Is the Branson MD2 method ever mentioned elsewhere

I can’t tell you that. Never saw/heard. Maybe not.

But there was a conversation between crew members just where you catch that mission story.
Could it count as a hint or mentioning… I don’t know

I would’ve liked the MD2 method to be honest. I thought the way that we can kill Yates with the MD2 in Mendoza was maybe a hint that the MD2 was canon in Bangkok.

Didn’t somebody at IOI ever see videos like this and think “For fucks sake John! People are shooting through walls and blowing the doors open with fire extinguishers to delete the evidence! Just get rid of the cameras or put the security computer back in the outdoor hut where it belongs mate!”

100% agree. This was such an unnecessary obfuscation of the map.

The level itself is just awkwardly designed with just one very large staircase leading up to each building part.
There are some rainpipes and balconies to traverse, but you’d expect ten fold as many, so you truly have some freedom of approach… too many balconies are dead ends, and too many rainpipes only vertically lead up/down exactly one floor.

Ye the drainpipes are utterly useless aren’t they ha.

I would actually love it if now that the series is complete IOI went back and refined some of these levels. I’m one of those rare players that doesn’t care about unlocks, challenges, escalations etc and just love replaying the regular levels over and over like it’s Blood Money.

I thought the way that we can kill Yates with the MD2 in Mendoza was maybe a hint that the MD2 was canon in Bangkok.

I guess the opposite is true, because the MD2 did not make the headline with “killed famous Jordan Cross” resulted in being picked as a part of the cinema equipment.

Is there even a cannon way though? If there is then how do we know? Maybe the ones shown in the legacy trailer? If so, then Dom Osmond was killed with an unsilenced pistol and then 47 would have had to run or shoot his way out of that place