If we had Bonus Missions

Ok, so the main thing most of us are looking forward to for future content are possible bonus missions, or a campaign like Patient Zero, or even Special Assignments if nothing else. But if IO were to give us some, what could they be about? Would they take place before the events of The Showstopper, like all the other bonus missions do (sans Patient Zero and Sniper missions, which take place in between)? Or would they be after, once Diana and 47 have agreed to continue working together, hopefully with a new ICA established under Diana’s management.

And would they be brand new stories, or would they be an opportunity for IO to finally resolve some of the background chatter that has taken place throughout the WoA trilogy? Here are my thoughts for four missions IO should definitely do, and two that are maybes.

For the two maybes, we’ve got:

What do you guys think? If we get more, would you want to see these background chatter story threads resolved?

What about a mission wher the target is one of the robots created by Knox Industries, sold to someone and transformed in a killer? It could be a real nice mission, with Byron Washington that hires some killers to hunt 47

I don’t think Providence property is getting a target if a mission there happens after the main plot.

Of course if missions there are prequels it could work out but given how they are already hit by Grey’s militia I see little room for 47 to suddenly play a role there too.

Grey hit Ether, not Blue Seed. Also, the Partners controlled those companies at a distance; theoretical control as stock owners and such. That’s the thing about the Partners, and Providence as a whole; all of their “control” is only theoretical, as long as people choose to follow their money. Even with their deaths and the disillusion of Providence, those companies would still be operating as individual corporate entities. Hence why Diana had those who were actively controlled by Heralds weakened by having them step down, but the companies themselves probably still exist.

When did Diana make any promise to Soders about Blue Seed, or anything? If your answer is the comic, grain of salt is heavily in play.

When did Diana make any promise to Soders about Blue Seed, or anything? If your answer is the comic, grain of salt is heavily in play.

Yes, this media that is confirmed to be canon contained this part. Diana kept killing high-ranking members of Blue Seed but stopped when Soders offered her a position at the ICA.

Confirmed as canon in-game, or by word-of-god? If the latter, again, grain of salt. The comic contains contradictions to the games, and when word-of-god does not align with the actual material, it must be interpreted as them just giving out answers without really committing to the mythology they created. Happens all the time, across all fictional media; Stephen King, Akira Toriyama, etc.; contradictions to their own work by providing answers to questions about it outside of said work. The comic is an interesting story, but’s its canonicity is loose enough to be considered “optional.”

Ergo, especially for those players who’ve never read the comic, a Blue Seed mission where Diana finishes what she started would fit right in and not contradict anything that came before it in the games themselves. Storywise, 47 would go along because Diana chose to go along with his revenge quest, so he owes it to her.

The comic, which is an integral part of the HITMAN universe and is directly connected to the game’s unfolding story line, will focus on key events of the past – starting with the intertwined origin stories of; 47, his friend Subject 6 and his future handler Diana Burnwood. The comic will add new layers of character depth to our main cast, while allowing us to tell stories that simply don’t work in a sandbox game. I am super excited about this and I hope new and old fans alike will embrace the comic book as well.“ 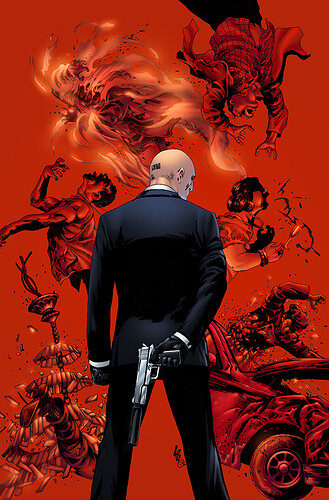 We’re very excited to announce that we are working with Dynamite Entertainment to create a comic book based in the HITMAN universe. The new series, titled Agent 47: Birth of...

So far I did not see any contradictions between the comic and the WOA trilogy except I think the gravestone of her parents have a different year on it ingame.

I’ll go over that later in another thread, because I don’t want this one to go off topic like the last three times I’ve discussed such things. I’ve been meaning to make a “canonicity analysis” thread anyway, so I’ll be sure to cover this once I do that.

In any event, let’s take that promise into account for the time being. Currently, the ICA is down, Diana has no more ties or loyalties to Soders in any respects, before and after his death, even if the ICA were still operating. And, it’s pretty clear that she never really let it go. If her time as Constant did not give her a chance to shut down the company, or punish whoever was making the decisions that led to her family’s deaths, this would absolutely be the time for her to say screw the promise and make a move, especially if they’re still causing trouble and somebody wants them stopped, giving Diana the perfect excuse to give 47 a check and send him after them. That would make a good bonus mission, or possibly even a campaign, if we include the other possibilities I mentioned.

Now that I think about it, they could all be put together in a new campaign. It could be titled “Loose Ends” or something to that effect. The targets might not necessarily have direct ties, other than linking back to Providence somehow, but it could be a campaign for 47 and Diana to fully close the loop.

Actually, in thinking this one over, Edwards probably already put Byron Washington in his place over his daughters’s duplicity, Fanin seems too much of a jellyfish to try anything (plus I think we see him resigning at the end of Untouchable), and Kohn, based on the info we get on him, seems to be more of a straight arrow than Morgan and Yates were, or at least not as much of an asshole that I think he’s be willing to go after whoever murdered his two partners in less than a year. So in hindsight, unless they all decided to pool their resources (Providence 2.0?) in order to seek revenge on 47, I don’t think these guys would need to be made targets. Washington perhaps, but between Edwards and then Diana, I’m sure his influence is liquidated.

Based on the Mendoza dialogue, it seems Washington was very much still in his position at the time (unless I´m remembering it wrongly) and certainly out for blood (and he likely still would be even after the fall of Providence). Would like to see him included.

Other than that, I´m definitely hoping for an opportunity to take down the Pos and the Al-Ghazalis. Was thinking about having Tren Po as a target in Chongqing while he´s there on some shady business. Plenty of ways they could repurpose the street-level areas to make it a worthy city mission. Another interesting setup would be having Jin Po and the Al-Ghazalis as targets in Dubai, mainly cause I would like to see if IO could implement a kill opportunity using the Kronstadt drone, and Dubai is perfect for this given the sky-high location and plenty of space for that thing to fly around.

The Morenos would be another set of target I´d like to have, since they´ve featured quite prominently in the game. The most sensible location for them to appear would be Mexico though (although they could always implement them elsewhere, e.g. Colombia), so I wasn´t really expecting the possibility of that until yesterday.

I made a thread for bonus level concepts. You can expand on your ideas there.

Create Your Own Bonus Level Wishlist

What I wanna know is what happened to Noel Crest?

He might make a return in year 2 you never know