Serious question: If I report my problems here, will someone at IOI see it and get to me?

I mean, when I open the game, it fails to connect, says it failed to fetch configuration from the server, and to contact Hitman Support for more information. If I try after that, it says the same thing, minus contacting support. This has been the case for hours now.

Well, google takes me to Square Enix for Hitman support and I know they’ve not been with them for years. There’s no support email address on ioi.dk and I can’t find any other way to get direct help.

I’m not even expecting an instant resolution or anything, but it’d be great to know whether or not someone who can fix my issue has at least read it.

This here is currently the best place to go for support. But it is more community members helping each other and IO monitoring this to work on more broad solutions.

You know, I consider the WoA trilogy to be (at least a candidate for) my favorite game series of all time. I’ve even made an extensive roulette (https://3facedjanus.github.io/) because I love replaying it so much.

Being unable to play (and still keep my progression, which, based on what I and others have experienced with Mastery levels in Dubai, might get f*cked up) just because we’re forced to have an always-online profile is pretty damn infuriating.

I’m in the same place as you. The game looks like it might connect on start-up and then fails. There doesn’t seem to be anything I can do about it in-game. Suggestions? Game cannot be played until this is resolved unless I want to play offline (which I’d rather not do as i’m trying to do escalations).

Same issue here , has been going for about 7 hours.
Have IOI acknowledged the issue ?

Oh cool they are working on it then. Thanks !

I do wish that message acknowledged that it’s a PC issue too… PlayStation fixes are fine and good, but they need to fix it for all the platforms.

Yes I agree , they seem to emphatize that the issue is on PS mainly , but looks like PC users (like me) are affected as well . Hopefully IOI are well aware

I had my game connected and was playing Dubai mission I killed both of the targets by 6min30secs and I had to wait at exit till 24min47secs until those kills actually registered on their server and I was able to escape. Then I went away for 30 mins and came back and epic store downloaded around 400mb data for hitman 3 since then my game is constantly crashing/stuttering etc.

look at what I had to see before one of those horrible crashes.

Hello, I have the same problem … 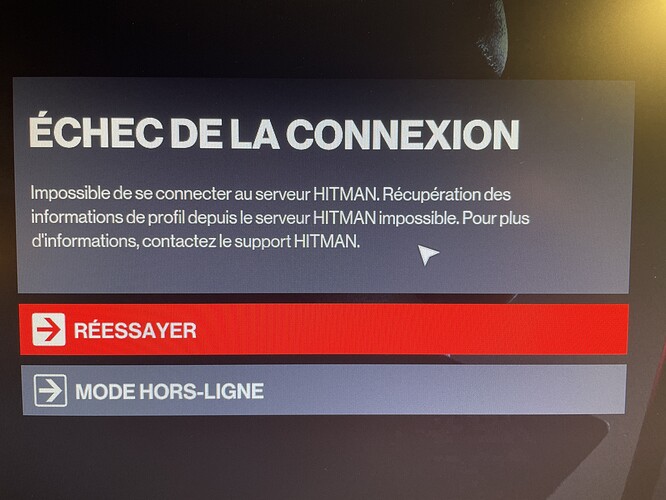 As I don’t think i’ve seen it done, tagging @Travis_IOI just to be sure he’s seen all of this.

Be careful with importat save games while this server instability goes on.

Right now I have a bugged game save due to disconnections in which one still alive target is shown as already dead on the top of the screen, doesn’t show up in the mini map or instinct, and counts as non-target kill if killed.
As I was attempting a challenge to kill both, I had to start over from an earlier point.

I can confirm that my issue has now been resolved by doing absolutely nothing but going away and waiting for an hour or so. working smooth now.

Wish I had that luck.

I’m still getting the same Failed to Fetch Profile error. No luck for me yet.

I was happily playing yesterday, and today until about 2pm (GMT). I tried playing again at 4:30pm and still can’t connect at 8pm (so 3.5 hours later)

On PC. Tried verifying the files through epic, still nothing

Was having a great time when it worked, just wish I could get back to it

Everything worked perfectly on Wednesday, yesterday there was a one-hour period when I couldn’t connect, today it’s been vice versa and it has only worked for an hour or so. Yeah, great. There are no good excuses to defend the always online bs with.

No problems signing in for me with Epic, but I do get much more frequent drops than I use to. Half the time I save or load it takes forever to connect, and every run I get a pause or two while it reconnects. Hopefully this is very temporary.

Can’t wait for the day they patch all the challenges into offline play before they shut down the servers, even if it’s 10 years from now lol.

Note for PC players.
Few people in other topics have reported that updating/reinstalling respective (amd, intel, nvidia) latest Graphics driver has fixed their crash and stutter related issue. May not be related to loading issue but I had both issues at the same time and both got fixed without doing anything but just waiting.

The worst thing is that it’s 21:43 in Denmark so we are most likely not gonna get a fix till at least tomorrow and at worst till monday.
So yeah…