See figure 1 and figure 2 below, which I made to make comparisons with earlier years possible. 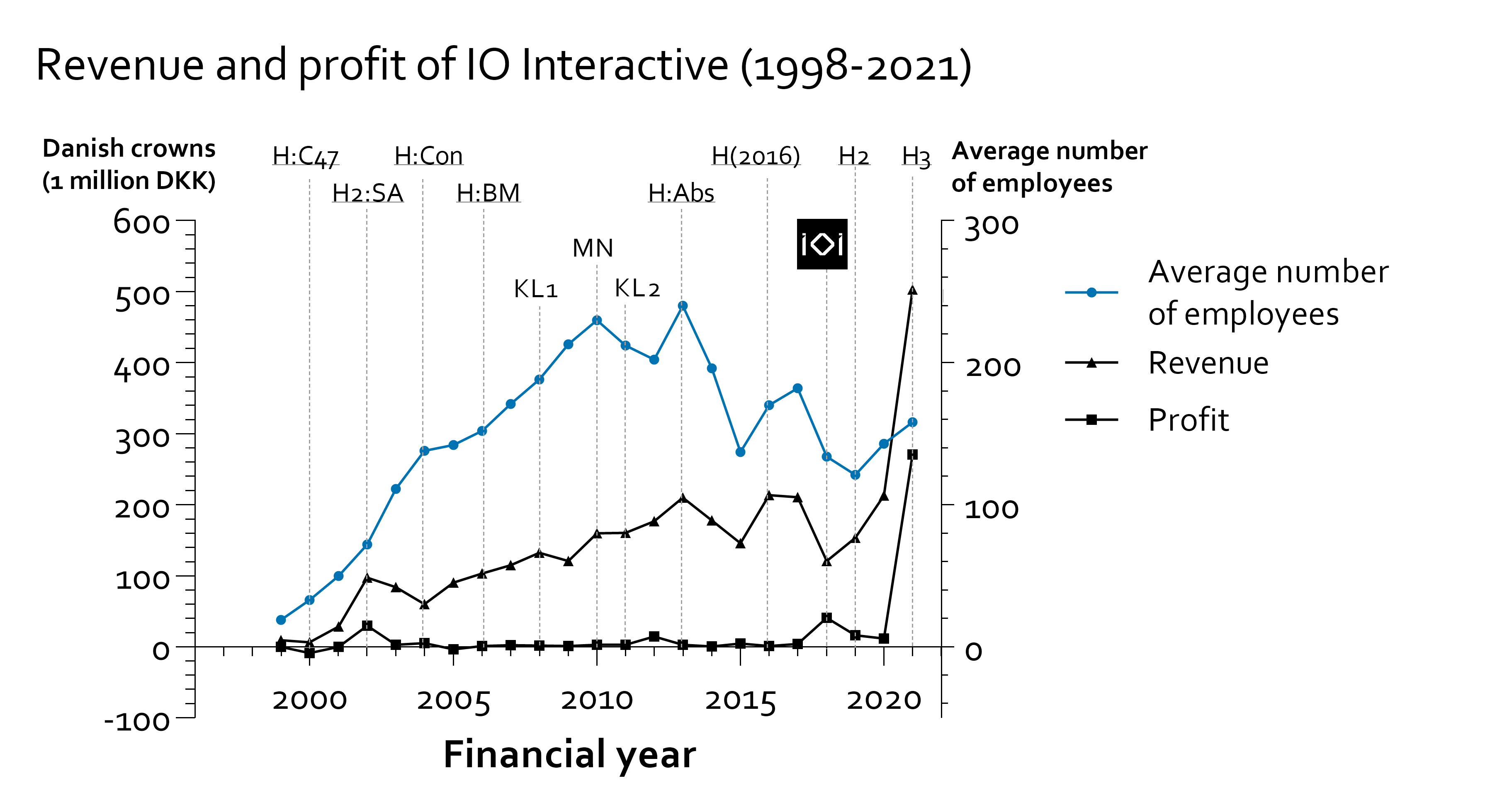 Figure 2. Figure 1 but very roughly converted to USD, assuming a conversion rate of 1 DKK = 0.16 USD. Historically, the conversion rate of DKK to USD has been hovering from 0.15 to 0.20, so very large deviations between the estimates presented above and the actual revenue in USD are not expected.

IOI’s management attributes these strong numbers to Hitman 3 performing above expectation, having earned 300% of their initial sales budget. Previous entries into the Hitman series have also performed above expectation. Additionally, the report acknowledges that IOI developing and publishing Hitman 3 has ensured that all revenue flows directly to IOI, rather than to external partners and other publishers.

Currently, the average number of (full-time?) employees is 158, which is more than recent years but still not as high as during the development and release of Hitman: Absolution when IOI had 240 employees on average. IOI has been steadily increasing their number of employees, planning to double in size from 200 to 400 employees in the following years to ensure that the development of their James Bond game and their unannounced IP (‘Project Dragon’) for Microsoft runs smoothly.

[Methodological note]
All data was directly collected from IOI’s annual reports and was imported into GraphPad Prism for visualization purposes. As such, the numbers presented above are accurate.]

If you mirror the image and take it upside-down it looks like its all going down hill from Codename 47 onwards… Coincidence? I think not. 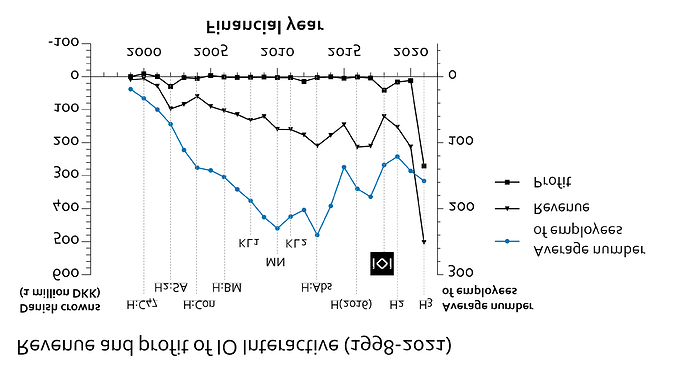 I’m no Businessman, but maybe they should remaster the Game to recreate this amazing Results? Hakan, call me.

congratulations to the new record, btw

They have come a long way, I am very happy for them. Access pass seem to be working well I assume. I don’t expect to see a trilogy edition anytime soon.

Currently, the average number of (full-time?) employees is 158, which is more than recent years but still not as high as during the development and release of Hitman: Absolution when IOI had 240 employees on average.

In Copenhagen, but with Malmo and Barcelona (IOI has 3 studios in 3 different countries), this number bump to 300, according to Linkedin. Which seems more consistent, as they were already at 200 during H3’s release according to IOI. And this is probably the minimum because not all employees have a Linkedin profile. It is also important to remember that the management wants to preserve a maximum of ~150 employees per studio to maintain a good organization and harmony between them, according to the CEO Hakan Abrak.

Great stuff, very happy that they’ve solidified the business so well after the touch-and-go days of teetering on the edge of shutting up shop following the Squexit in 2017.

Hopefully the firm financial footing they’re on now will be a platform to really put the resources in to ‘finishing off’ HITMAN 3 and the WoA trilogy, with eventual fully-featured Offline modes and all available ‘temporary’ content (i.e. Elusive Targets, seasonal Bonus Missions etc, excluding items that aren’t contractually allowed like the Sarajevo Six/Garey Busey ET etc) patched back into the game for permanent replayability. That would be the perfect send-off to the masterpiece that they’ve spent the last 5+ years building.

47 has a very bright future indeed!

The conventional approach to make AAA money in the video game industry are:

Congratulations to IOI for sticking with a single player, cerebral, puzzle stealth game that requires a lot of interacting systems and robust programming of NPC behavior. They didn’t sell out with free-to-play or microtransactions, or changing their formula.

It took the third reiteration of the reboot of Hitman, more than a half a dozen years after initially conceived for them to make serious money off their franchise. IOI just got better and better in their iteration of Hitman. Hitman III was an expression of a video game company who was very confident in the product they were making. IOI finally convinced those who didn’t play Hitman2016 and Hitman II to finally try it out after the rave reviews received. This came late – IOI had hoped to receive such rave reviews during the episodic release of Hitman in 2016.

They didn’t sell out with free-to-play or microtransactions, or changing their formula.

Well, they did free-to-play (er, free to start), 3 times at that. And are still doing it with the location rotation for the Starter Pack III

Plus, they used the growing popularity of Telltale episodic-style releases for the content, letting them build up revenue with more enticing price points.
So I’d say they did change up their usual single-player formula.

However I’m really glad to see that it all payed off well! Very well!
Hitman is a pretty unique game these days for closed-off sandbox individual level design, and I don’t know what changed to make Hitman 3 a way bigger success than Hitman 2 (they had the same release model) but it’s cool to see it get so much recognition now.

Mainly self-publishing. Thanks to the Capcom leak, the Apple/Epic lawsuit and other things, we know how much partnerships are valued, and it’s a lot of money when you get back 100% of the income. For Borderlands 3 Epic paid $146M, for Metro Exodus $37M, for Control $10M.

I’m going to use as a base the number of potential users, that’s what Epic is targeting of course. These are estimates so the numbers are absolutely not accurate but we can use them to make comparisons.

Estimated number of players on Steam who have at least launched the game (I took the most recent previous titles).

So, with extrapolation, we can say that IO Interactive received maybe 20 to 30M from Epic for the exclusivity, if we add the complete trilogy on Stadia and the VR exclusivity on Playstation, we significantly increase this number. According to leaks of Capcom files, Sony paid $5M RE7 VR and Google $10M for RE7/RE8 on Stadia.

The Covid played a role, next-gen console some months before can boost sales especially when everyone is delaying their games (prince of persia was supposed to be released one day after hitman 3, far cry 6 a few weeks after…etc) you have some free field.

Hitman 3 was released on 12 platforms which also helps to bring more players. With access pass, new players bought more than one game, some could be easily tempted to buy the previous ones too.

And the game is good and interesting ofc.

I think Hitman 2 mostly failed in initial sales due to release date being November which is already a pretty busy time for releases. Mix that in with 2018 was an exceptionally busy year as had to contend with Red Dead Redemption 2, Pokemon, Fallout 76, Battflefield, Spyro and Smash Bros. Plus a few more.

Late January and February was a far more ideal and quiet time for marketing and exceptionally less competitive release area. Plus having a new game already configured for new consoles in mind was a good bonus.

Yeah, that November 2018 release date for H2 was wildly optimistic at best and batshit insane at worst given that RDR2 was sucking in every last disposable income dollar being spent on gaming anywhere in the known universe at the time. Have no idea what WB were thinking there.

Nobody crying about 7DS pricing?
Good.

IMHO, what made Hitman III a bigger success are the following things:

(1) Most important reason why Hitman III was a success – nearly unanimous, positive reviews by gaming websites and publications.

(2) As previously stated, Hitman III had the January release date without competition of releases from other AAA publishers. It was one of the few at the time with a high user and Metacritic score associated with release of new consoles.

(3) Hitman III didn’t have the same negativity of the previous in the trilogy:
Hitman2016 was panned for its episodic release format, and always online requirement; Hitman 2 sales were hurt by the negative press associated with IOI being let go by Square Enix because of poor sales of Hitman2016. There was then an insecurity of whether Hitman franchise was going to continue .

well deserved! i imagine this is what it feels like when [INSERT SPORTS TEAM] scores a [INSERT WIN CONDITION] but, y’know, more capitalist.

Would be interesting to see what the graph would look like with estimates if IO hadn’t self-published H3. Otherwise the H3 data points are completely irrelevant to the rest of the trilogy since the vast majority of the money coming in went to the publishers.

Insert ‘Feels Good’ meme but make it look like Mr. Abrak, he’s rubbing bills on his face, and bills are floating down around and behind him, with the caption at the bottom…

gotta be careful, but golden helicopters in the background.

and (5) Good marketing. The very focused approach with a few big, memorable stories (‘Hitman is now in VR!’, ‘IOI is developing the next James Bond game’) leading up to the release really generated some hype within the casual gaming community.

I’m very happy for IOI. They definitely deserve it! Seems going independent really worked wonders for their actual profits (along with releasing a great game of course). The future is looking bright!

Other factors to consider:

well deserved, can’t wait to throw my wallet @ IOI more in the future, especially excited for 007

The average Hitman III reviews, emphasized the Dartmoor murder mystery which was the most un-Hitman like set up for a level. IOI then transformed Dartmoor into a more sandbox gamey location in the free Garden Show DLC.

Personally the first time through of the Berlin level was the best original experience in a Hitman game for me, as it was so cool to be the hunted rather than being the hunter. Creeping up in the middle of a clearing in the middle of nowhere, and hearing the increasing loudness of the “thud” of the Rave. First time through, I had no idea where IOI was taking the Berlin level. The extreme awesomeness only lasted in the first go through.

Ah yeah Berlin had some awesome moments, My favourite on first playthrough was being an enforcer being suspicious due to trespassing and after quick luring and knocking out turned out to be a target the other is when hunting noticing certain NPCs using an ear-piece. Wish they wouldn’t of been marked as target soon after but that really felt like a little spy thriller.

But back main point, really happy IOI had a solid win after what must of been a half-decade of hardship and uncertainty on sales. And sounds like they etched a nice spot out for themselves in the gaming landscape. Really looking forward to what they produce next within Hitman and James Bond.