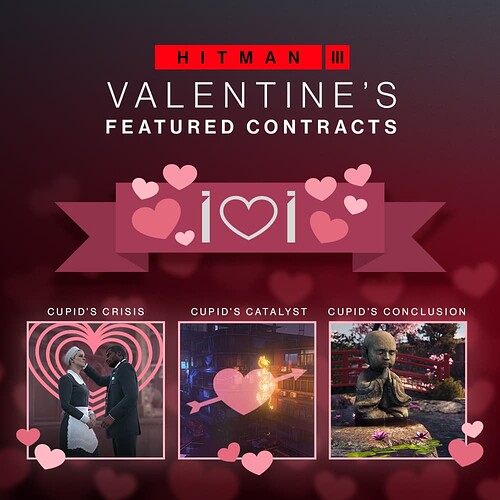 Love has arrived in HITMAN 3 !

Your client, an individual known only as ‘Cupid’, wants to ensure that romance will prevail.

With Valentine’s Day right around the corner, ‘Cupid’ has three Featured Contracts ready, and need your help…

Talk about a developer specializing in stealth games, here comes 3 IOI’s Valentine’s Day themed featured contracts! I wish there would be a roadmap to prepare myself, but well they are here anyway.

Nice little detail though, the Chongqing contract was created using the Lust suit. You gotta dress yourself accordingly, I guess! 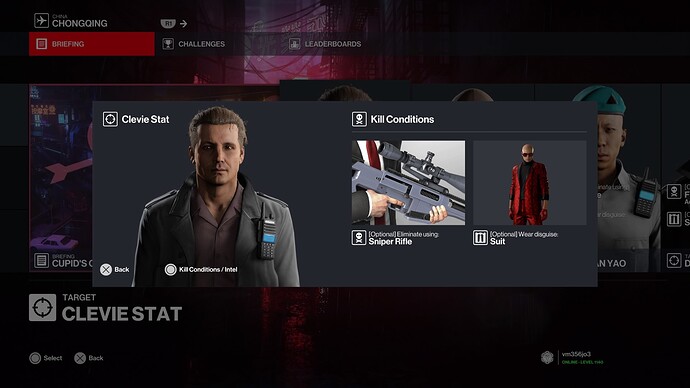 ioi you sneaky buggers, these contract images are phenomonal with the small edits yet they dont announce it. shame

Exactly! Where is Clemens announcing the Season of Love? 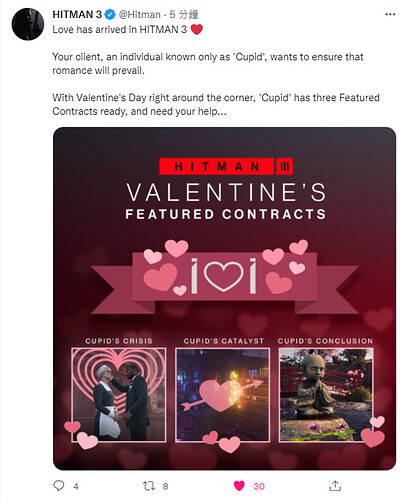 Exactly! Where is Clemens announcing the Season of Love?

2 Dartmoor contracts with No Recordings; we have some comedians here…

Well, easy not to get caught then

Man, the hardest thing in a gaming history to do.
I can’t even imagine who would handle this task…

Well, this was a nice surprise. 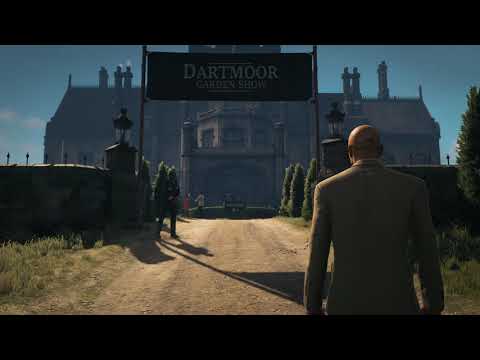 I really, really wish DGS had another starting point. In my 1:47 run, 35 seconds is literally just reaching the first target. The only reason I enjoyed this is because 2 out of 3 targets were in the Japanese garden, which is my favourite part of the map. Otherwise, this is easily the worst map for contracts because of that sole starting point.

Man do I agree on DGS. What an oversight.

(What do we need more, a better exit in Mendoza or a better entrance at the garden show?)

Nice run on Catalyst. That’s the only one I could get to today. I thought I was fast at under 3 minutes. I can’t wrap my head around some of you speedrunner folk.

A welcomed surprise. I guess Cupid loves the players.

A nice surprise today, I wish they would give us more info on FC’s going forward though.

Wasn’t overly keen on the Chongqing contract due to the target choice, but I really enjoyed routing the other 2! Here are my final runs: After the fiasco involving the release of Year 2, its best IOI does away with the roadmaps for good.

Amazing double kill with the propane, would never have come up with that on my own.

Do you think that there should be anything to replace them?

I think my biggest issue is that the briefings don’t say that these contracts were created by a member of the HITMAN community known as IOI.

Not sure. Roadmaps become false promises to some people due to glitches denying access to the new content so maybe its better to make no promises at all hence no more roadmaps.

Anyone else decide to do these Valentine’s Day FCs in the scarlet suit obtained from the season of Lust?

I had to check to make sure that suit had gloves.

With Featured Contracts, Escalations, and unlocking challenges, I make an exception for gloved outfits out of necessity. But, yeah, that one has gloves, so it’s win-win for me.