I just noticed this item’s properties. It’s lethal like any other knife but this one says consumed poison as well. I’ve tried all ways in using it (including throwing), I mean the angles they can be used and all don’t count as consumed poison (as I tried on a single target marked as consumed poison and when I check the status of the kill, there’s an X as in not that specific kill used).

Is it just misinformation and confusion in the description or is there actually a way to make this work as consumed poison?

This is the item in question. I don’t even remember unlocking this knife. lol 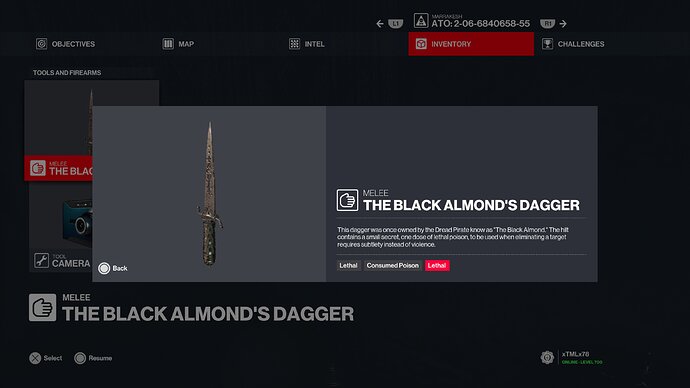 You should try to poison a drink with this knife.

Oh crap, didn’t think of that.

The trick is that you can use this knife as a vial of lethal poison, so you can poison any drink/food if you have this knife on your inventory: mind you, it’s only a single dose.

It’s not a real game changer, but you can have a meele weapon and a single dose of lethal poison all in one in a single item in your loadout.

I don’t even remember unlocking this knife. lol

In H2 it’s unlocked via mastery on Heaven Island. I guess it’s the same as H3.

This reminds me, I never used the knife to poison any food/drink. Say you disguise as a waiter or a cook, is it still legal to poison a plate/glass with this particular dagger? Or other npcs will notice you holding the knife and get suspicious?

I remember I once tried.
Using this knife the action is (was) always suspicious, no matter what disguise you’re wearing.
I suppose nothing changed since

It’s not a real game changer, but you can have a meele weapon and a single dose of lethal poison all in one in a single item in your loadout.

I think that alone is an item that does 2 things and that in itself is a game changer. The most unique item in the game.

In H2 it’s unlocked via mastery on Heaven Island. I guess it’s the same as H3.

I never unlocked it in h2 so this is completely new to me.

I think that alone is an item that does 2 things and that in itself is a game changer. The most unique item in the game.

No doubt about its uniques, but honestly I think it’s faster and safer to use the classic vials, and even as meele items, there are still some of those that have unique traits and are better to use (like the concenable knife or the hobby knife, that is totally legal). The only notable thing about the poison dagger is that basically you have two items in a single slot and nothing more.
But I remember you showed me how to use at best the serpent crossbow, so I might be wrong.

Yeah, it’s a cool item, but I’ve never been tempted to use it even once. Melee items are so common it hardly matters. If it can’t be used legally by waiters, that makes it even worse than the regular ol’ posion vial in most cases.

There’s still potential for “transformer” items or combo items, I’d say. The exploding pen is another one, but I haven’t found much use for that either.

It’s a nice gimmick to have a knife and a lethal poison dose in one package. Hopefully we can et more melee weapons that have sedative and emetic poisons aswell.

Although it might be safer and faster, you get that extra item in your slot. Could be good for some interesting contracts. lol

Pretty cool alternative to the poison vials or syringe. The drawback is that NPCs will notice you use the knife in a drink even if you’re dressed as a waiter I think. So that kind of is the main drawback to using the knife to poison a drink.

I actually made a puzzle contract a few months back which makes use of this knife. Just putting it here since it seems relevant.