I didn’t realize we didn’t have an aggregate of all the new things coming in H3 yet, so I’m posting them here 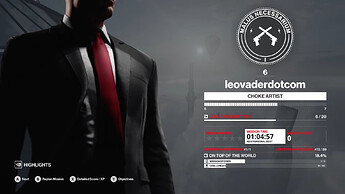 why have a list of two and a half features?)

i hope they at least try to change things up in the last two levels. like with the disguises unlocking doors in Hokkaido

New Rating System - awards you titles (aka Playstyles) for playing certain ways. The Playstyles we know of so far are: • Silent Assassin • Hired Gun • Mixologist • Marksman

aces. i had no idea. glad they’re back.

…i’ll still miss them newspapers though.

I never expected to be excited about rain in a Hitman game. About time.

New sniper rifle with a new and unique function, that can shoot two bullets at once/rapid succession.

I think it can be interesting to also list confirmed changes (electrocution phone), new weapons and features like PSVR, DualSense support, 4K60 on consoles, Ray Tracing.

am i misremembering or did contracts have rain? it’s been an age.

“I shit you not, RAIN is one of highest things on the list for many Hitman fans!” - Matthias Engström during the Rapid Fire Interview.

i mean if you want to make “living, breathing worlds” Weather other than sunshine seems to be a given, or not?

Computers will have a UI (Season 3 maps) - And any time you learn a password in intel, you’ll be required to manually enter it

i mean if you want to make “living, breathing worlds” Weather other than sunshine seems to be a given, or not?

What about a random dynamic change of the weather during the mission(s)?
I would like it above all

I haven’t heard of a new rifle, which trailer?

this would be so amazing, imagine Sapienza on a rainy Day, next time you boot it up its Summer time, the next time its maybe Nighttime or Winter.

if we go into dreaming territory then why not give us the ability to choose the time of the hit? and the map will be slightly different depending on whether it’s morning or evening etc. with less or more npcs on the streets, open/closed cafes and so on

Yeah, and the weather is changing during you play the mission.
You start at a sunshine, but as soon as you reach your stash, the heavy rain started, and so on

that wouldn’t work because they always go for a specific mood on each mission. and also some npc routines like sunbathing wouldn’t make sense at night or during rain

Ah yes that’s true. Looking forward to this one, like all the new “immersive sims” elements too.