Map of the World according to Agent 47 v3 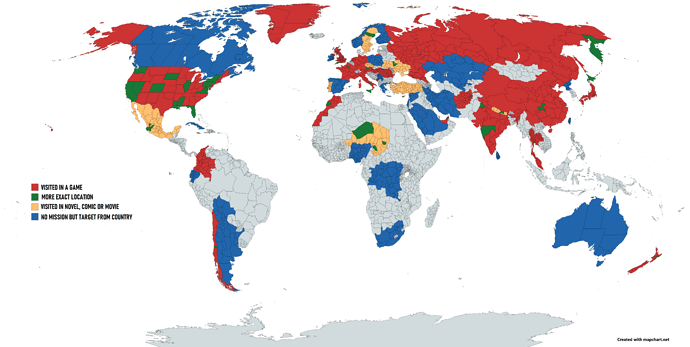 This map contains all locations featured in the Hitman game series, both of the novels, the 2007 movie and the Birth of the Hitman comics.

Barbados, birthplace of Kalvin Ritter, and Australia, the location of his murder, are not included.

The map was made by me using MapChart, but I would like to think a couple of people for their contributions:

u/SilentWraith177 for making a map that included the locations from the movie and the first novel.

Check out his map here.

should’ve marked st petersburg in green in russia as well

It is green. Just very small

Just noticed this is probably in the wrong category, oops

So we desperately need a mission where penguins from antartica are targets.

Yes! Almost like the Hitman 2 Christmas Game but on the opposite side

Yeah, Hitman General Category is better to put it in.

Is there a way to move this somehow? New to the forum.

I had a couple of mistakes in my map which led to some confusion, for example, marking Saudi Arabia as a country visited by 47 (Dubai) when it should have been the UAE.

Your version seems to have corrected my errors

Edit the title of your topic. When you press edit (In a shape of a pencil), the category will be shown.

I had a couple of mistakes in my map which led to some confusion, for example, marking Saudi Arabia as a country visited by 47 (Dubai) when it should have been the UAE.

Your version seems to have corrected my errors

Still a very cool map! Didn’t even know 47 had been to Chad before I saw it lol

thank you very much!

Great map! I was just wondering about an hour ago if 47 ever has been to Switzerland. Now I know. And I feel it should be a map in H3. Not just because I live here. Because every great villain and every spy/killer has to visit the country at least once. It’s a rule.

It would have been better if there were more details about in which game/book/movie 47 have visited the locations.

I agree - there’s a lot of potential there that could and should be used.

If I ever learn to make interactive maps, that’ll surely be a priority.

What targets are from Ireland?

There are two if I remember correctly - but I can only name Kim Euston from Hitman: Sniper for some reason.