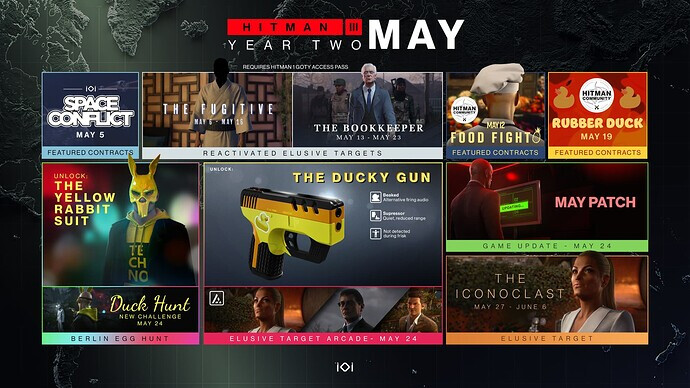 So Rocky will be out before Freelancer it seems like

It’s been a hot minute since we started HITMAN 3 – Year 2 and we’ve just reached the 3-month mark. A great time for us to give a deeper update on what’s coming up in the rest of the year.

If you’ve just joined the World of Assassination, or need a recap on what Year 2 is all about, you can catch up on the plans we shared earlier this year. Today, we want to give an update on these exciting updates and when you can expect them to arrive in the game.

Let’s start with the most relevant piece of news first. We’re moving the release date to make the mode all it can be. Here’s more detail.

We see HITMAN 3: Freelancer as the next evolution of Hitman and an entirely new way to engage with the world and characters that we’ve built into the World of Assassination over the last 7 years. We’ve concluded the main campaign with HITMAN 3, but the world has so much more to offer and we didn’t feel as though we’d quite achieved everything we wanted to with Agent 47 in this trilogy.

In short, this mode is quite expansive and involving. It’s built for players that want to dive deeper into what a Hitman game can be and for that reason, we’ve decided to give it more time.

The truth is that it’s a luxurious decision for us to make. HITMAN 3 has been a success and with that, we’re able to give our team that extra time to tighten the bolts and make sure that the mode is as close to our ambitions as possible. We want it to land well and be a platform for Hitman players to enjoy this game world for a long period of time.

In fact, we’ve had several rounds of internal testing, and we’ve even shared playable builds with some of our trusted and core community members to give feedback and share insights after lengthy playtests. This was all done on their own machines and in their own homes to truly replicate what it will be like when we launch the mode.

The feedback from the playtests was largely positive and the mode is in very good shape. As we’ve said, we’re taking some extra time to tighten the mode up and improve several elements that we think will greatly improve the gameplay experience. Whilst we work on those improvements, we’re also preparing to dive deeper into the mode and share more of what you can expect.

With all of that in mind, we’re now aiming to release the Freelancer game mode to HITMAN 3 in the second half of 2022. We think it will be worth the wait.

With the change to the release of the Freelancer game mode from Spring to second half of 2022, we’ve needed to adjust some of our plans for the next few months. It’s a relatively complex and fluid situation where we’ve been moving things around behind the scenes, but we’ve landed in a good place.

In our original plans, we had a patch scheduled for April that would have included fresh new content for that month and throughout May. Now, we’ll be introducing that content with our next patch, planned for May 24th. 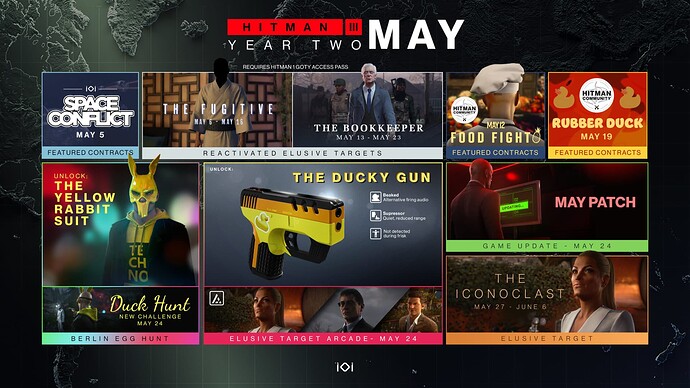 As you can see above, the biggest change will be a few more rounds of Featured Contracts than we normally release over the course of a month – although we are brewing on some exciting ideas for how to make the most of them… When we hit May 24th, it’ll be business as usual with ET Arcade unlocks and HITMAN 3 ET’s back on the menu.

We hope that sharing more insights and going more ‘in-depth’ about the choices that we’ve made along the way will keep you informed about what’s to come in HITMAN 3. We waited longer than anticipated to share these plans with you to make sure that we could share them concretely and accurately. Thank you for your patience.

It’s not just Freelancer that’s got a new release date. We’re actually bringing forward the release date of the ‘Rocky’ map that we first revealed in January. We’ve now got that scheduled in for a July 2022 release.

This new map will have an intriguing narrative for Hitman fans, as it takes place before the events of HITMAN 3 and fills in a few gaps from the World of Assassination storyline. We’re excited to share more details in the run-up to release, and we’re even more excited to show you another look at the location in all it’s glory right now.

This is Ambrose Island. 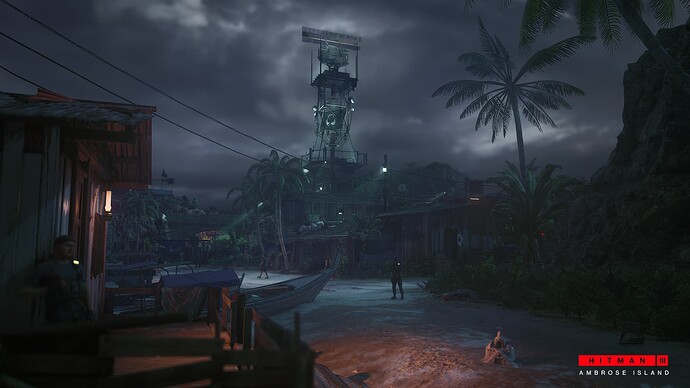 As we said above, the next milestone for HITMAN 3 will be the game patch that is scheduled to arrive on May 24th. As always, we’ll have detailed patch notes of what has been changed and improved.

We’ve tried to boil down the complexities and moving parts of our game into a comprehensible post, but you’ll be forgiven for wanting to scroll back up and makes sense of exactly what’s happening and when. To make it a bit easier for you, here’s what HITMAN 3 Year 2 looks like from here on out:

Ahh that’s a shame about freelancer, i was hoping for the release to be this month, i’m sure it will be worth the wait, not played Hitman for a while!

Don’t expect it to be released until the very end of Spring as in one second to midnight of June 22nd in the most extreme time zone.

Its been pushed back to the second half of 2022. No spring time-frame.

We’re getting a new map in July? Hell yeah. Also, I don’t mind them taking their time with Freelancer. It’s great news that they want to be so ambitious about it. It has so much potential.

Honestly, I though it was a fake, but it looks this is actually the real May’s roadmap.

It seems this is the season of reskins and reactivations …

I’m glad we can unlock the cooler bunny mask suit this time, at last… 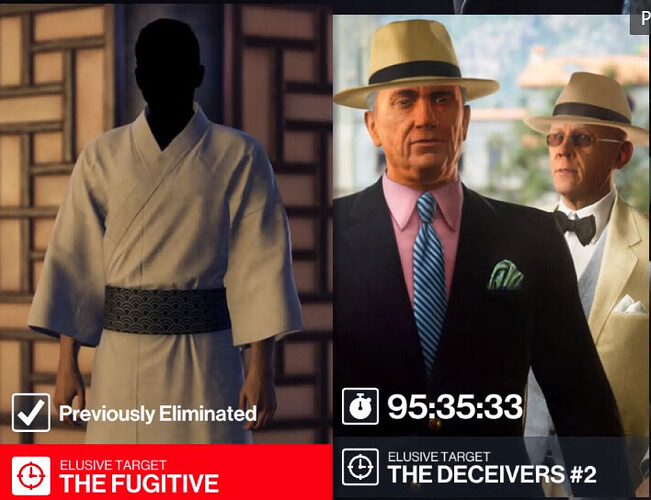 One thing though… I do hope those ‘trusted community members’ weren’t just speedrunners. Freelancer has the potential to finally give us a less gamey mode. Something like a roleplaying, core-Hitman experience.

I’m honestly happy with this. Getting multiple things a week again is nice, plus finally getting the Raver Suit with the bunny mask. I would’ve somewhat preferred The Chameleon and The Surgeons, but I can do those in the arcade. It’s nice to finally get a date to expect the next patch

The Good: Ambrose Island will be released sooner than expected, although still two months away.

The Bad: Everything else. Rereleases, reskins of things we already have, Ambrose Island taking place during the main WoA campaign, meaning our timeline and understanding of events will have to be adjusted to fit it in, and most of all, Freelancer being pushed back further.

Every time we get a roadmap and people whine about not getting new stuff, I step in and say to not be ungrateful. And make no mistake, I will not be ungrateful for getting these new toys, contracts, new map, etc., and will blame myself for the buildup of my own hype and anticipation for Freelancer and the map formerly known as Rocky. That being said, I have never been disappointed by a roadmap before, not truly. I’m disappointed in this one. AI taking place sometime before H3 is frustrating, unless it takes place after Haven but before Dubai, I’ll excuse that. However, Freelancer making me wait longer when I had already set aside time to be off work to binge on it, because they made it sound so assured that they were almost done with it and would be ready to release in spring, that is a huge amount of wind out of my sails. Again, I’m not gonna hold IO to blame; I won’t be a hypocrite on this. They promised nothing, they owe me nothing, I fell victim to my own expectations.

Sorry for the venting. Gimme 2 days tops and I’ll probably do a full 180 and be excited as hell for this roadmap, but I can’t right now. So bummed.

Hard agree on this one! I wonder who they are? I’m sure they have some sort of NDA or equivalent so they can’t talk about it, but I hope they are providing a wide variety of play styles to test the mode with.

It’s funny, I feel exactly the opposite. I think it’s very interesting that there is more story to tell within the established story.

Maybe the #2 stands for “Year 2” rather than just being an indicator for the second incarnation?

Yup. I’m leaning towards an accidental reactivation of the old one (as opposed to a #2)… but I guess we’ll see if it ends up changing