I have really been looking forward to this ducky one, so find your lucky duck, and get creative. Our all-time favorite Rubber Ducks are the theme, and I cannot wait to see how you all interpret quack.

How to get your Contract Featured: Well just as last time, there are many ways to get Featured. It can be based on a super creative briefing, a cool idea or just a plain fun contract. But remember: They have to be inspired by Rubber Ducks, to be taken into consideration.

Note: you’ll need to create them in HITMAN 3, but feel free to use any location from the World of Assassination. 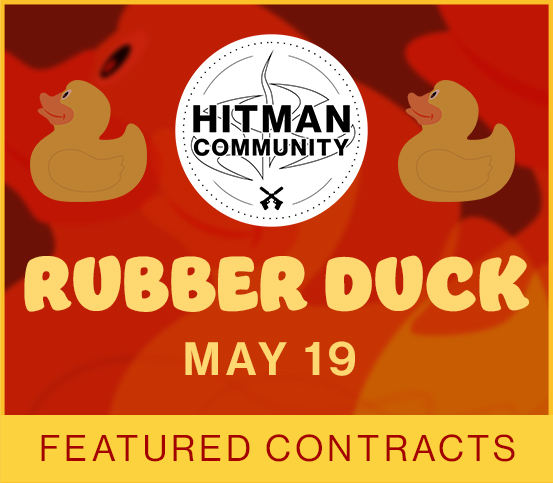 EDIT: I have modified and replaced my previous submission with this, thank you for your feedbacks. However kindly consider my previous Image Submissions.

Brief Description:
Rubber Duck Race is a type of festival where thousands of rubber ducks race on a river, usually within the city – my forum mates from western Europe may know about this fundraising event.
And what could be the best racing level other than Miami mixed with unique drivers as targets. In this contract the male drivers need to be eliminated using accidents, please note that Hold My Hair drowning accident challenge icon has a rubber duck in it, but you can use any accidents as per your convenience. As per the theme, I recommend using the exploding rubber duck on the female driver, however you can use any explosive device.

Some Tips:
You may use the coins to distract the two drivers on the lounge and spike with emetic poison to the restrooms. You may subdue the journalist interviewing Thwack driver and he goes to have a beer.
You may lure the Blue Seed driver behind the tent in a lonely place. For the female driver, you may use proximity rubber duck or a remote as per your ease.

Disclaimer: There is no gender bias on the female driver, it just the player can note the explosive on female and accidents on male. 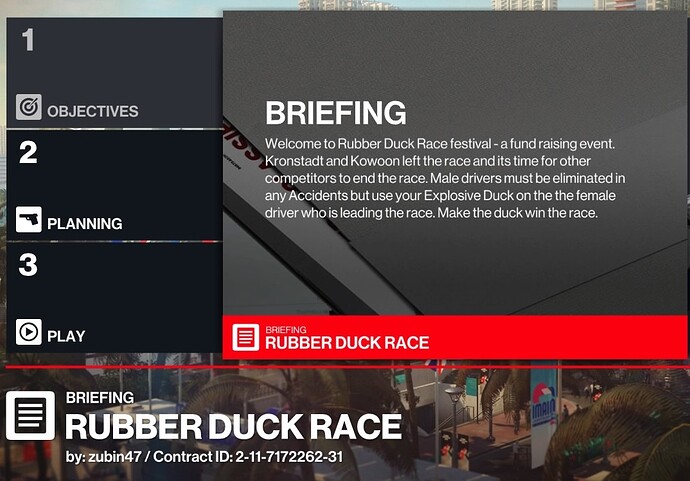 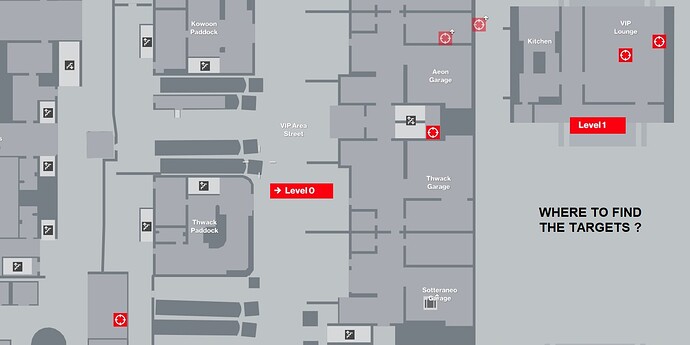 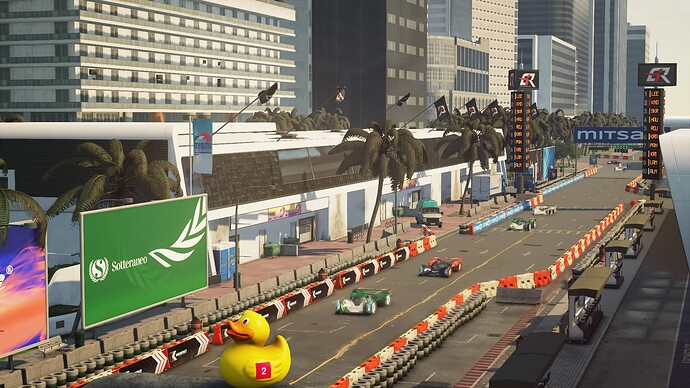 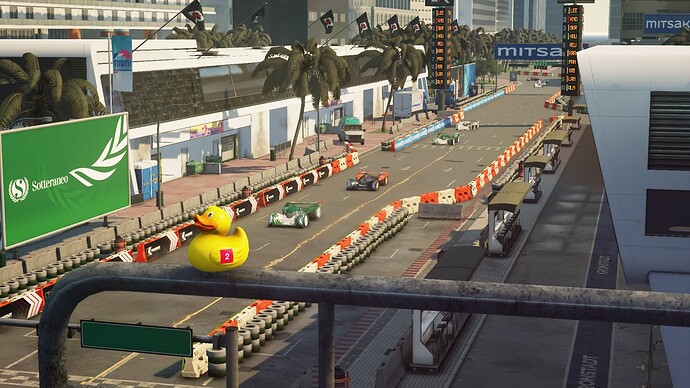 Warning: Be careful with the Rubber Duck - I died trying taking pictures of this Image Suggestion LOL

Contract Title Burn Out at the Hydrogen Bar

Move through the light, the stalker’s night, searching the prey he will find his way. Through the blood and the pain, the first victim stammered out his name. All is not right, the killer hid the body in the plainest of sight. Two steps ahead, another was dead, he spelled out his plan in the crimson of red. Ten after midnight, there was no one in sight. We got the wrong man, he has struck again. A blow to the head, the third one is dead. 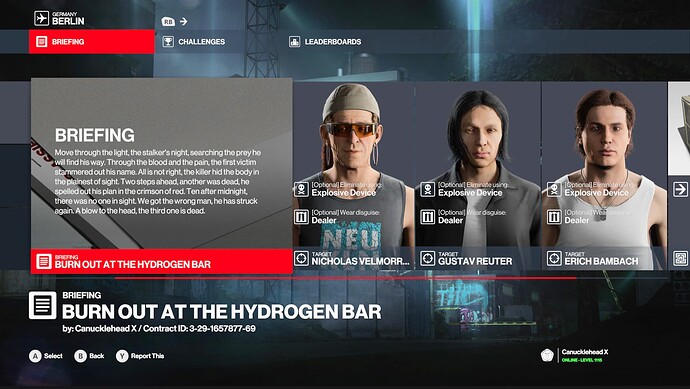 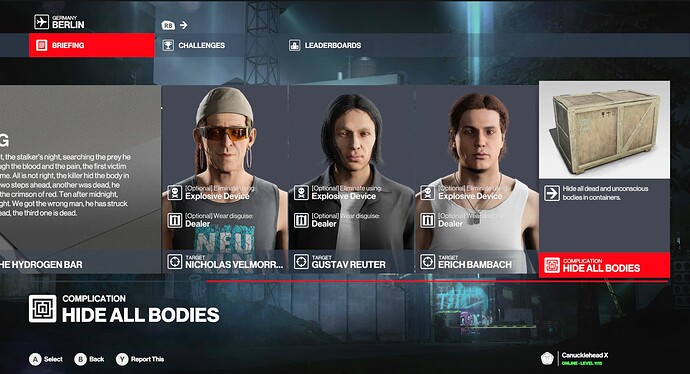 A contract I’ve been thinking of since launch, using the dealer to kill a few people in the club. Simple in execution, I look forward to see what optimized runs people come up with to go between the three different bars. Due to explosives, the only complication is hide the bodies. Use the ducks for best results. 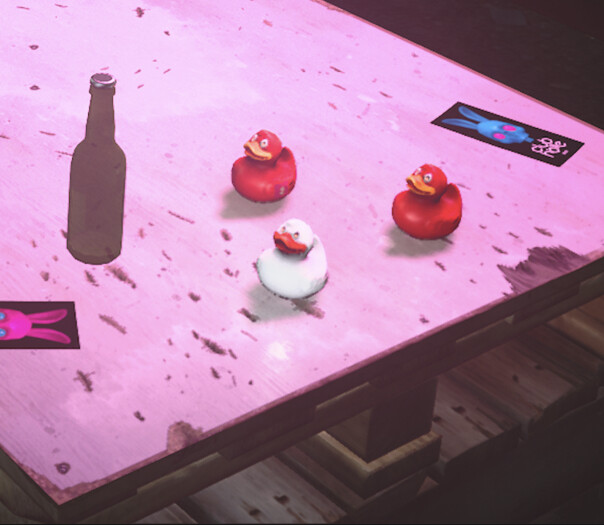 Let’s quacking go! Here are my two contract submissions for the Rubber Duck Featured Contracts… one brand new - Quackpot!!!, and one recycled - The Night The Duck Cried from the Wrath Featured Contract that I submitted 6 months ago (doesn’t feel like it but I’m quite surprised).

The mopeds at Sapienza are a great spot to kill people by explosions. Here’s the thing as it is nighttime, can you make all these instances accidents? We don’t want to make the news readers believe that it is connected to The Author. That would be such a silly misopportunity. Quack! I think we just hit the quackpot.

Brief Description:
Three targets needs to get exploded by mopeds/motorcycles. You can find heaps of them in the alleyways between the Church and the Gelato Shop. Place the explosive device/explosive duck near them and trigger the explosion. It is a simple Suit-Only contract. So your goal is pretty much to find the most optimal path for a very quick time. Will recommend on smuggling in an extra explosive. Since you’re out in public, the ducks is the best explosive weapons of choice. Best to take the alleyway exit. Make sure you don’t get spotted and of course, do not change disguises. It’s Suit-Only.

Featured Contract Image Suggestion:
A moped that got exploded in the alleyways. 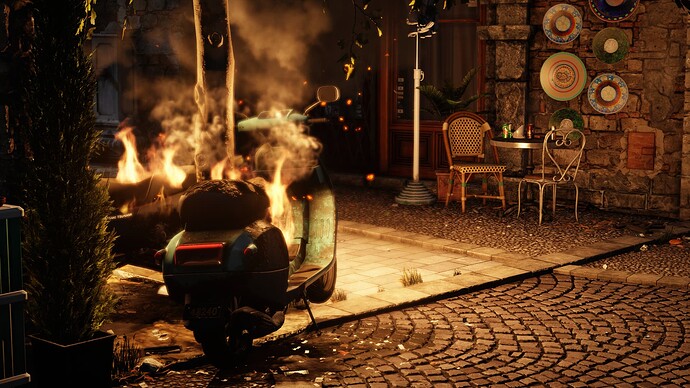 Hello there fellow agent. According to our most recent survey, the least used explosive device is The Ducks. We are uncertain why other agents tend to avoid the explosive duck approach, but this is the reason why our ICA Researchers has asked you to complete this very risky contract*. Become a Researcher and you’ll test our theories by taking out 2 buddies. They’ll hate it just as much as the others & the complications. *You may experience the feeling of Wrath after several retries. Good luck!

Brief Description:
This was once formerly my Wrath submission, now it is recycled to Rubber Duck submission. In this contract, you are tasked while disguised as a Researcher to “test” out theories with why not many people would use the Rubber Ducks or any Explosive Devices to eliminate their targets in missions. You’ll need to eliminate 2 targets; a patrolling Block Guard and an ICA Facility Analyst using Explosive Devices. You can use Breaching Charges as your explosive kills but that just ruins the nature of this contract, use the Explosive Ducks. There is 5 complications; Hide All Bodies, Eliminate the Targets Only, [Optional] No Bodies Found, [Optional] Do Not Get Spotted, and [Optional] No Recordings. Remember to exfiltrate via the Apartment Safe House Exit. It is a bit of an annoying contract but that was pretty much the reason why it was formerly a Wrath contract. 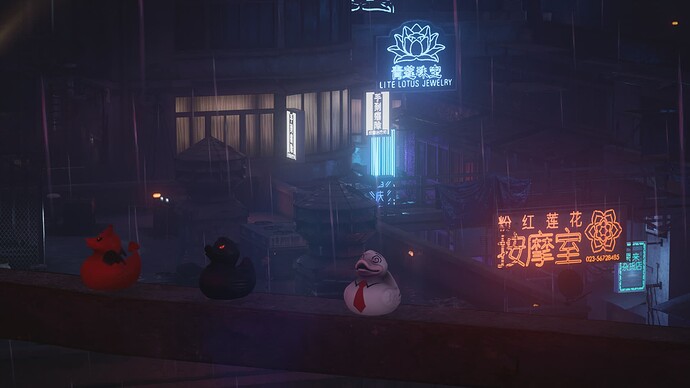 Contract ID :1-13-8846474-68
Platform : Epic Games
Submitter Name : Dinozafr
Contract Title : Duck Conversation
Brifing : Two ducks from different mafia family decided to talk “angry”. One family ordered two people from the arc of the family. And the other family did the same. But there is one problem. All orders were sent to the famous assasin Kashmir . He accepted the order of both parties. But does he survive the orders? Good luck.
Brief Description: Eliminate four targets in disguise Kashmirian
Location : India , Mumbai
Image : 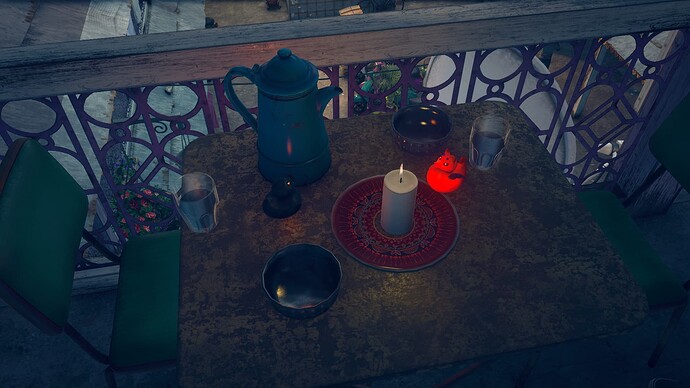 To all who use the glitchy lock-on-throw methods (ffs please don’t, have mercy to the casual players) or use my tool to require specific ducks for explosion kills:

Ducks can have names that are very alike. Names scroll in the menu but the initially visible part is often the same or at least not the crucial part to identify the required item. The H2016 and H3 proximity ducks even have the exact same name.

Please make it in the briefing and even better the contract image perfectly clear which exact duck to use.

And prefer H3 ducks on H3 map contracts for accessibility.

Well… since I missed the opportunity to create one for the last theme, here comes one for the Ducky theme

I would be thankful, if someone could remake it for pc (in a silent Moment and just if you want and have the capacity)

Hey 47. Its your old friend birdy here and I need your help. My dear friend and Buisnesspartner, Ulysses D. Kingfisher, died last Month during his yearly Skydiving Tour because his wingsuit had a disfunction. So it seemed. But my little ones found some of his personal Logs. He wrotes down that his own team wants to send him to retirement and take the lead. They sabotaged his Suit. His Team is Called D.U.C.K, David.Ulysses.Chris.Kalvin. They might think they are mature but they are still ducklings…

Brief Description:
This Contract takes place in the undergroundfacility mostly, so the mansion is a good place to start the mission. Because it is a no Knockout Mission the biggest challenge for some players might be gaining the bodyguard disguise (because its yellow, like a duck) from the locker. It’s kind a longer way cause your loadout is full with rubberducks

But once you got it, the rest of the mission is simple and creative weapon distraction. Have Fun! 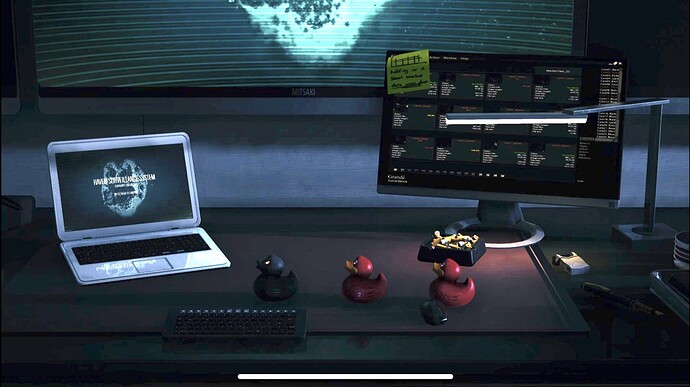 A post was merged into an existing topic: Fan made Contracts of Hitman 3

Please use this thread here not for discussions.

Mine probably isn’t as interesting given the disguise changes

No… yours is Interesting, well in PS4 the only way to tag rubber duck kill is thrown weapon (otherwise it tags as explosive device). The PC players have flexibility on doing the mods. Well if we can kill someone with

Creators used glitches in previous FCs, in fact this glitch is quite fast. 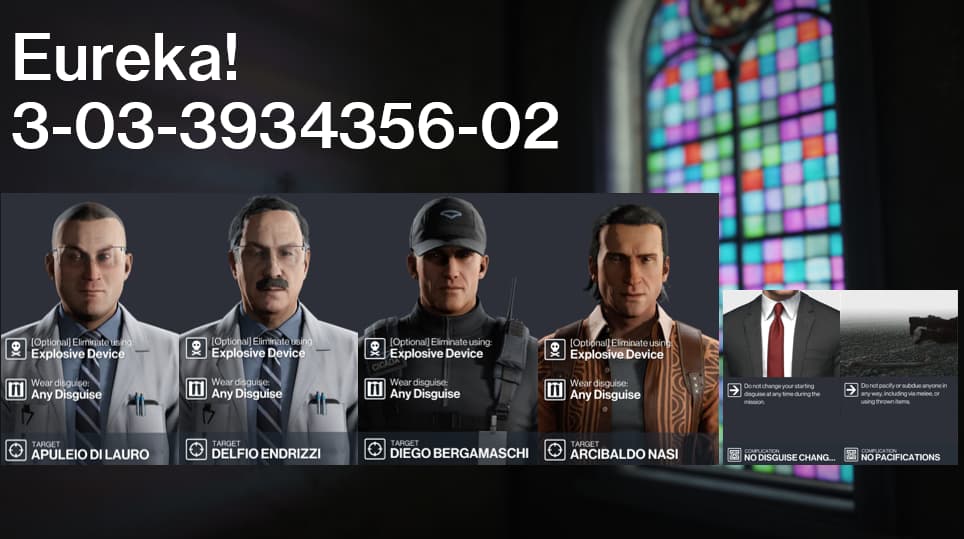 Brief Description: Although I can’t be sure it’ll be seen as any good, making the player use a variety of explosives instead of letting them cheese with breachers is great. Also uses the explosive on the map, and brings the most out of the disguises. Mansion security can’t go downstairs, lab techs can’t go up.
Location: Sapienza WoT

To all who use the glitchy lock-on-throw methods

To be honest, I suggest to ignore contracts like this and don’t take them into consideration while picking the batch.
You explained why

Welcome, agent. The agency has sent you armed with duckie editions only equipment to take care of this contract. How will you proceed with taking care of the targets? Best of luck, 47. 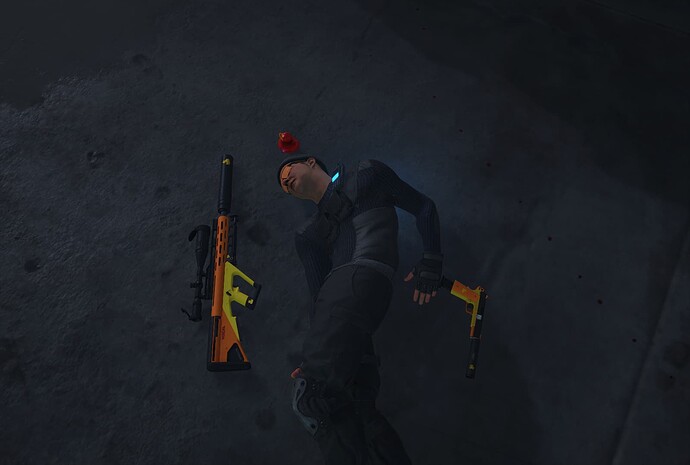 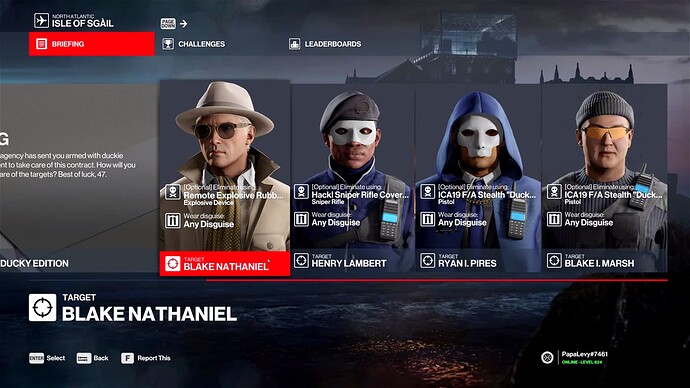 Contract Title: What a Ducking Mess

Briefing: The mother duck has contracted you to eliminate 4 men who have kidnapped her ducklings. 47, we know you have a sentimental attachment towards ducks, so we decided to assign you this contract. Please, 47, you’re our only hope.

Brief Description: 4 targets around the map that are protecting the ducklings, each killed with a ducky themed weapon. 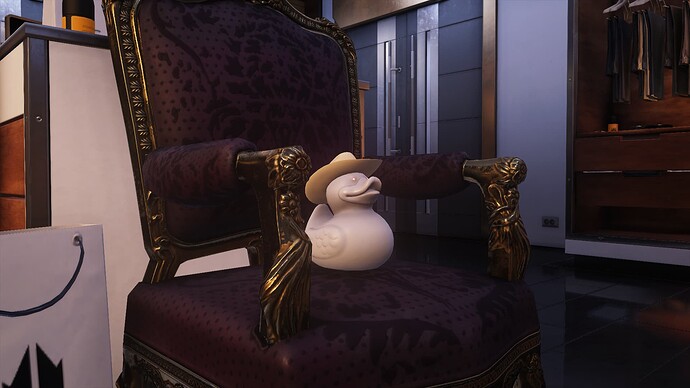 Briefing :
One of these things is not like the other,
Stuck in a wall, unlike his brothers.
You must kill two with deadly ducks,
For the odd one out, I don’t give two… ducks.

Brief Description : The whole contract is based on the differences between the first two targets and the last one. The briefing, kill conditions, target locations, target roles etc. 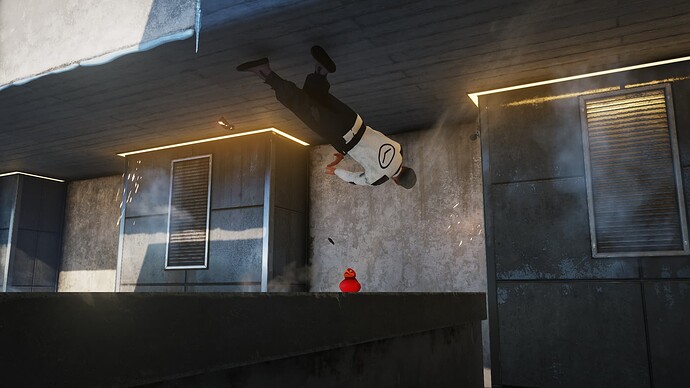 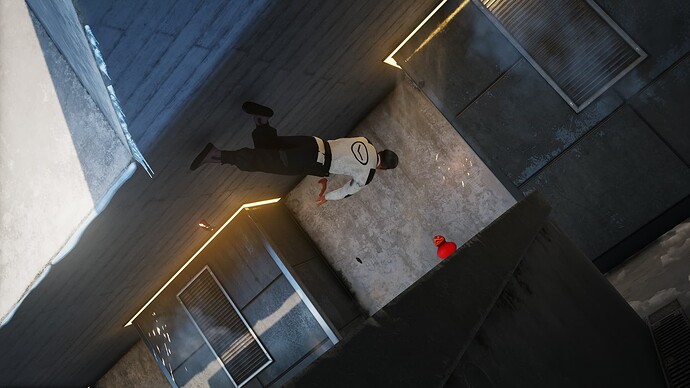 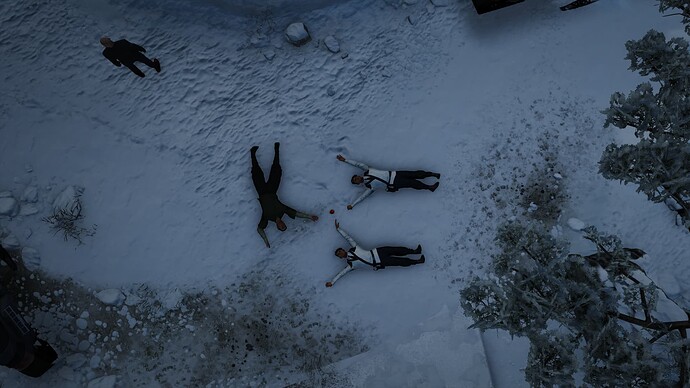 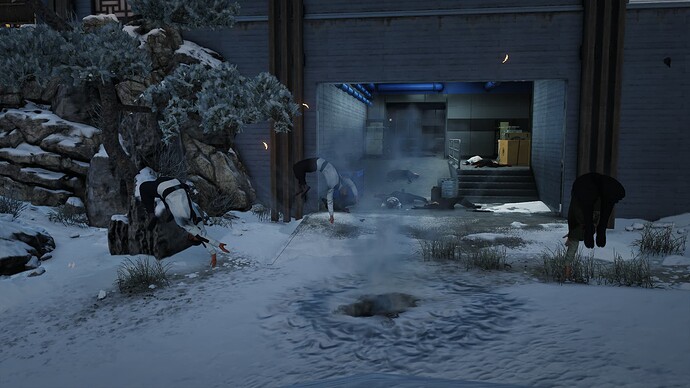 Contract ID: 1-29-9612755-04
Platform: PC
Submitter name: Kevin Rudd
Contract Title: Boom Stick
Brief Description: Steal the shotgun from the Biker gang, and kill three people across the map with it without changing disguise; but the most obvious/easy strat doesn’t work so you’ll have to try harder than that 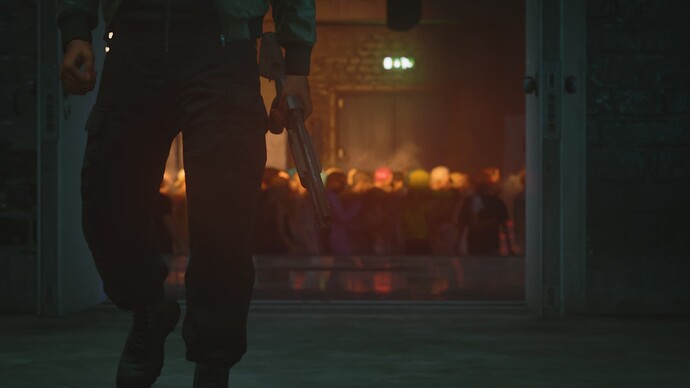 (This is one I particularly hope will get featured, for the sake of people who aren’t on PC 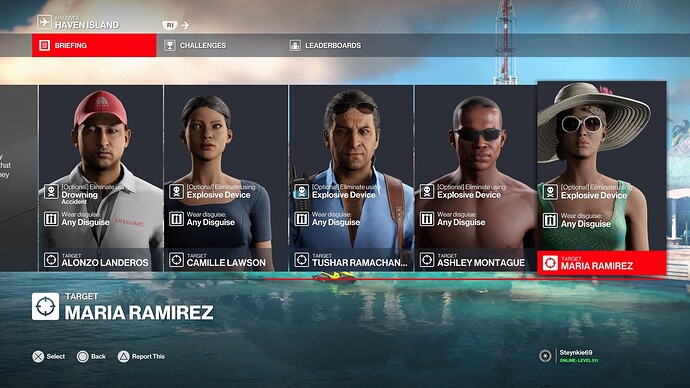 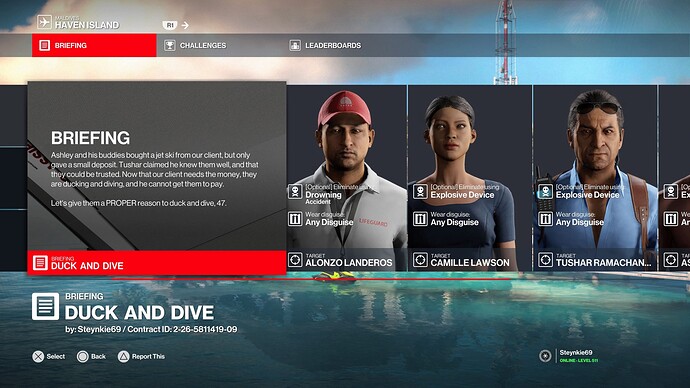 Let’s give them a PROPER reason to duck and dive, 47.

Description:
I added a drowning to try and prevent players from killing 2 targets with a breaching charge.
You will need 2 remote explosive ducks for this contract. If you plan it right, you can kill 3 targets with one shot, and the bodies will be instantly hidden. Note that if you place a duck inside the jet ski tank, it will count as an “any method” kill. Timing is critical, and SA can be achieved in 6 mins or less, as seen on the leaderboards
Tip: There is a certain disguise that will provide a quick escape if things go wrong!.
Suggested image: 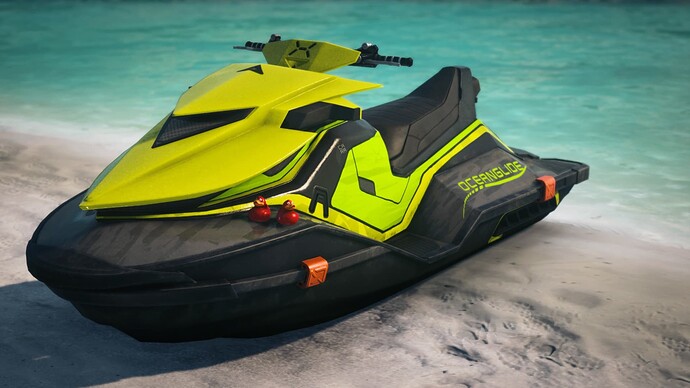 "Good evening 47, we have received intel that a Flamingo themed race event is taking place in Miami. Clearly this is unacceptable, as it is Duck season! We need you to take out the Flamingos scattered around the race as well as the organiser of the event, preferably with Rubber Duck explosives.

As an extra challenge, try to complete it only in your Suit with No Knockouts!" 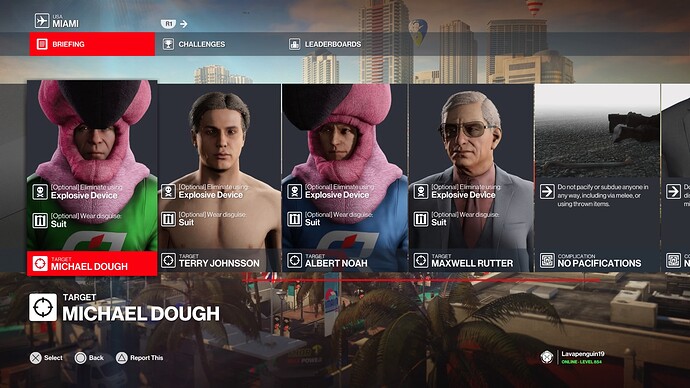 Brief Description: SONKO (suit only no knockouts) contract involving taking out 4 targets all using explosive devices. The contract requires bringing 3 different explosives taking up all your item/smuggle slots, although using the car bomb found in the security building is also an option to free up an item slot. I would highly recommend bringing a Sieker in your pistol slot. Possible to Silent Assassin with all loud duck explosives.