With the race and the contract deadline finally being over, our winner agent is @Adil15101 with 189,178 points!

I did think of this, but I didn’t think you would want us to lose SA…again. Lol.

Btw whoever wants to create the next contract can do it. This thread is slowly dying unfortunately.

This thread is slowly dying unfortunately.

I think this is mostly because we are just running out of good custom ET ideas that use already existing NPCs. And also there are global problems like the Ukraine-Russia war.

It has been 4 days and no one has responded. I might just try to create another ET just to keep a spark going, but I would prefer if someone else created one.
@Crewdy @Krikkit2021 @scoobywizard @TheChicken @avesmaria @rattleshnake @Viv @Canucklehead @ZeroGravitas

This thread is slowly dying unfortunately.

I think this is mostly because we are just running out of good custom ET ideas that use already existing NPCs.

I was going to say something along those lines. I think it’s a combination of a lot of things; I don’t about everyone else but, personally, I’m a bit Hitman’d out in general and am catching up on my backlog of video games while waiting for Freelancer mode to come out. That said, with contract creation capabilities coming to the rest of the Patient Zero campaign in a week or so, the thread may pick back up then.

(PS, I could maybe think of a contract if nobody else wants to but I don’t have any ideas at the moment so it might take a day or two)

If nobody else is already doing it, I’ll make one tonight. 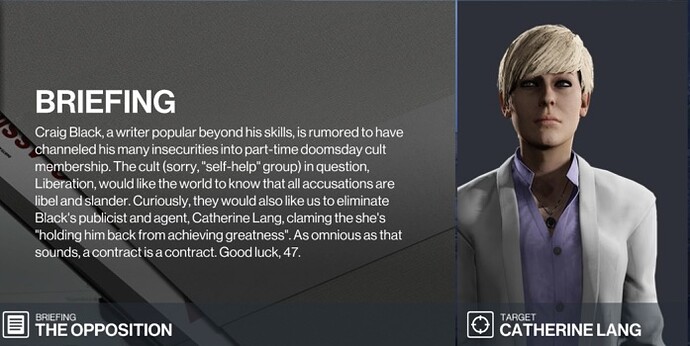 Note that the “self-help” group also insists that Lang is actively attempting to sabotage Black and may have unidentified assistants so they have some additional objectives accordingly.

Reports say that Lang will be in Sapienza as long as Black is and that he seems to be waiting for something. While we have yet to ascertain what exactly that may be, our intelligence indicates that whatever he’s waiting for will happen at noon EST, March 27, after which he will leave and so will Lang. Good luck, Agents.

I think I’m the only PlayStation player left, so this probably won’t do much good, but…

HE’S NOT DEAD YET (I HOPE).
I wanted to revive this thread as I had an idea and ran with it (I even made a video briefing!). The bank is currently under investigation for fraud with manager Athena Savalas being the center point of the investigation. However, Savalas suspects that Hunsicker and Bronson are behind the leak and believes that they are planning to plant false information incriminating her in order to remove her from power.

We have uncovered records that point to our targets having high-value stocks in rival bank ArN. With Savalas gone, Milton-Fitzpatrick would be the centre point of a global scandal, and stocks in ArN will rise dramatically, meaning that our targets stand to make a large sum of money out of this investigation.

Savalas has hired us to remove Hunsicker and Bronson from the investigation on a permanent basis, and recover the incriminating documents before they can get in to the wrong hands. We don’t have long before the authorities find that document 47.

Take out our targets, recover the evidence and exfiltate the bank as quickly as possible.

I will leave you to prepare. 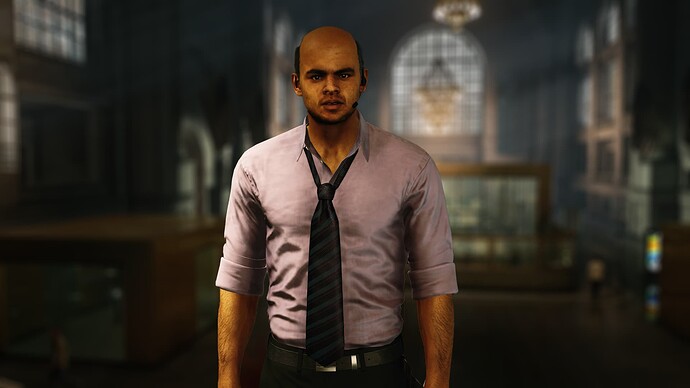 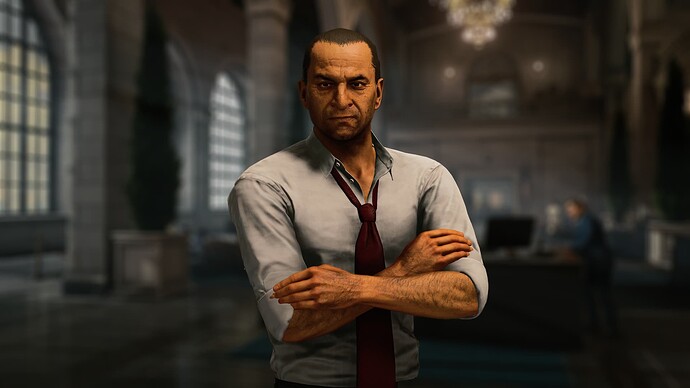 Tagging all of you that were “usuals” in this thread, I hope we can get at least a few entries for this one.

If we get enough people interested, I’d love to keep some sort of leaderboard going forward, and then maybe we can think of some way to reward the winner after a bit of time? Tag anyone else that I have forgotten!

Yes! I’d love to bring this back, always was a lot of fun and led to some nice longevity for HITMAN, when the featured contracts or other re-run content felt a bit stale.

(On a side note, I was worried a few months ago when Freelancer was still in the cards that it would take away from this mode – luckily that didn’t happen, but if IOI does well, I feel like a rogue-like Hitman mode could scrath the same itch as this user-created-challenge)

Anybody tried this yet? I already played it before I was aware that it’s an elusive contract. So I already know where the targets are. Wouldn’t be fair.

I will do it tomorrow! I’ve taken a long break from playing Hitman (except ET:s) but just replayed all main missions in WoA, always enjoyed these elusive contracts too.

Seems like I’m kinda rusty, a camera spotted me when I was about to shoot it and then I had to shoot a guard. I also don’t remember all enforcers here. I like the targets but I didn’t really bother to deal with them properly because I had already fucked up quite majestically. Only got a score of 50,404 but it’s been quite some time since the last time I played with no instinct or other help.

Idk what’s happening but there is horrible flashing in certain areas of some maps which makes them pretty much unplayable, the lobby of the bank is one of them. Even if I had a good run I wouldn’t really want to publish the video because of that.

Well if Beldingford was rusty I was SUPER rusty.
(Actually, i think I got a better score, but still, I was running from enforcers so much, was confused about disguise areas.)

I haven’t played New York in a looong time. Cut down a sizeable 17-minute run to 8min video 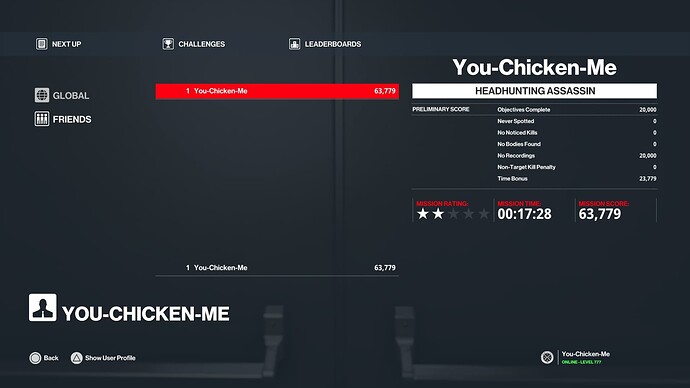 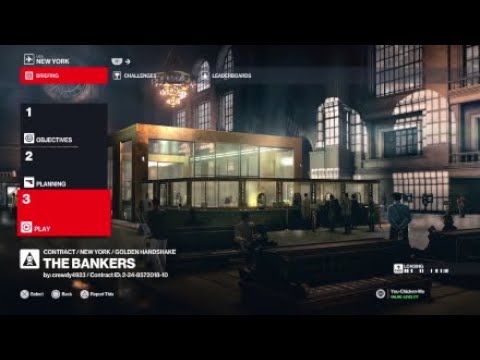 Seems like I’m kinda rusty, a camera spotted me when I was about to shoot it and then I had to shoot a guard. I also don’t remember all enforcers here. I like the targets but I didn’t really bother to deal with them properly because I had already fucked up quite majestically. Only got a score of 50,404 but it’s been quite some time since the last time I played with no instinct or other help.

Well if Beldingford was rusty I was SUPER rusty.

Oh no! I feel like eveyone might be quite rusty on this one, outside of these ET’s I don’t think most people play with NPC Icons & Instinct off at least, that’s the real killer with these I find. Jimmy and Fabien are 2 serial run-rippers on this map as well

Thank you for playing it though, I hope you both still enjoyed the challenge. Let’s wait and see how others get on!

Based on how it’s going so far, I’ll probably fail but I’ll try to do so with style!

Also, is retrieving the file worth any extra points like bonus objectives used to be? If so, how much?

No, just an additional required objective. Didn’t want to get in to bonus points for this one, but the case file fits the story nicely so I added it as an extra!

Wow, it seems everybody was kind of screwed over. I also managed to get 67,179 points.
Unfortunately, I couldn’t make a video since the game was suddenly running at an awfully low FPS rate for some reason which wouldn’t look nice in a video.

Everything went well until I tried taking out Wayne Bronson. I won’t reveal much, but I did try to Sieker him, which didn’t work out because of one NPC. 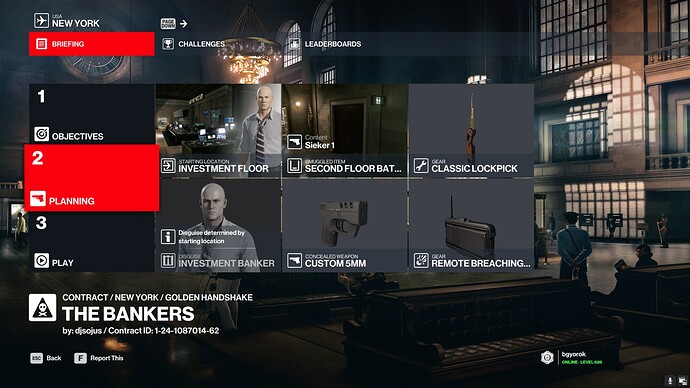 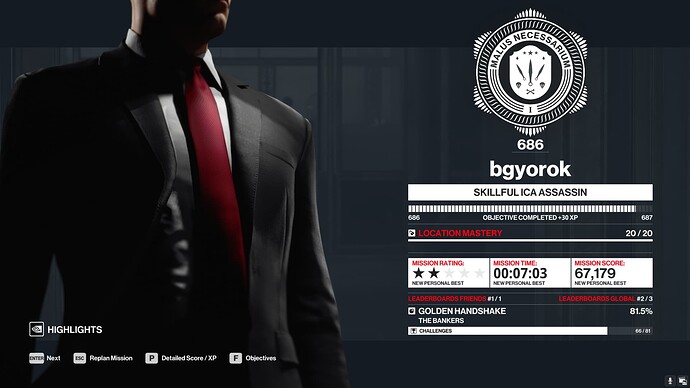