Late to the party as usual.

It’s been I while since I did much of anything in the ICA Facility, so I was fairly certain going in I probably wasn’t going suit only, but was the contract meant to have the Soviet Soldier disguise restriction? I did go back in and try it Suit Only just for fun. Getting the vodka bottle was easier than I thought and I managed to get to top-floor guy, but both times I pushed him at the exact moment when Jasper Knight is walking into his office and can spot you through the grate in the ceiling.

but was the contract meant to have the Soviet Soldier disguise restriction?

Yeah either that or the Suit-Only bonus here should be 30,000 to counteract the lost 20,000 objectives bonus for the disguise

but was the contract meant to have the Soviet Soldier disguise restriction?

Crap, no, I’m guessing I forgot to remove the restrictions when I remade it

I think we can probably call time on this one, which gives you the highest score.

Wonder if IOI will merge all custom created contracts from all platforms into one data hub? Good idea since the game has come to a conclusion.

I had hoped to get this out yesterday, but the real world interfered. 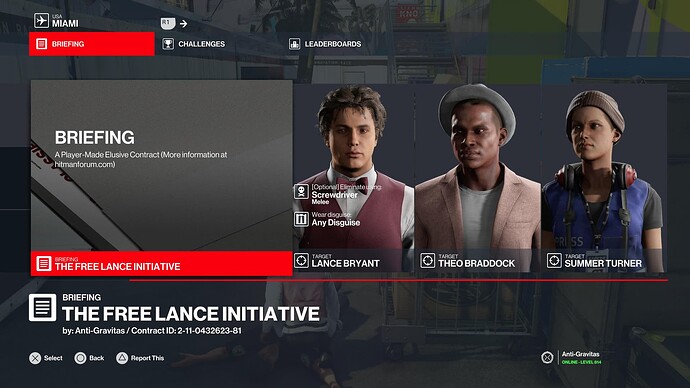 Notorious con-man Lance Byrant was recently released from prison due to overcrowding, serving less than half his expected sentence. The parents of his last victim have seen their son spiral into drug abuse and depression and wish to ensure that Bryant cannot take advantage of his newfound freedom. Bryant and a pair of close associates have been tracked to Miami where they are gathering the information they need to leverage the wealthy patrons of the Global Innovation Race for their next grift. Locate them, 47, and remove them from the equation.

And I’m sure I don’t have to remind any of you, but I had to doublecheck and the unlocked Professional Screwdriver doesn’t count as a plain old Screwdriver.

I’ll have to make it on Xbox since i love Mimai and so i know where every single target is, not much of a challenge

Sorry it took too long!

I followed the rules
This contract was very fun 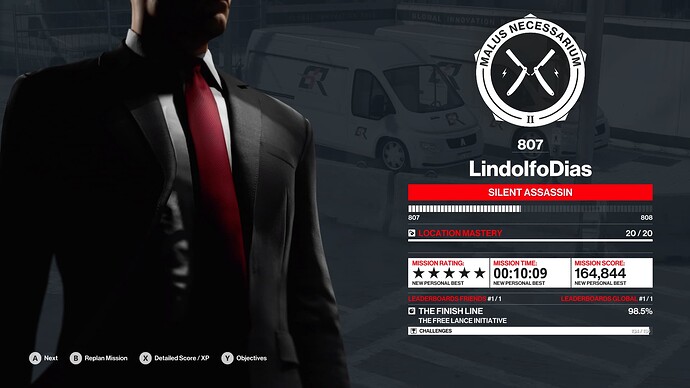 Did this the other day. I quite enjoyed this one, but man those guards are just mean

Did this the other day.

Oh, good. Because my first thought was “Why the hell would you play it now?”