It’ll probably take a couple of days realistically, so give it some time. I too am frustrated and preordered, but we should direct our frustration in a more constructive manner by collectively alerting IOI to these issues just so that it (hopefully) doesn’t happen again in their future games. We were luckily able to see them close out the trilogy so let’s just wait just a little while longer. It’s only temporary. No worries.

I think it’s just a matter of luck and to perodically keep trying. I’ve had to restart my console a few times today and then when I tried to reconnect, it was having an issue fetching the configuration file. I was trying every 30 minutes or so each time and eventually got in.

Will be leaving the console on over night so I won’t have to deal with it in the morning.

If this thread is about the ‘failed to fetch profile information’ error when trying to log in to the game, there’s a possible workaround but it will potentially delete your H3 save games and resets all settings to default. It basically created a new local profile for you on your console.

On the PS5 menu, go to Settings > Storage > Saved Data and then delete the H3 ‘profile’ stored there. It’s a similar path on PS4.

Deleting this file won’t affect any of your progresson, only the ‘local’ files.

Another PS4 user that cannot connect. Will try this workaround.

Ok, I’m beyond frustrated now. I’ve carry over my progress on their page and have finished status. I did that before launching Hitman 3. Now it is impossible to connect to the severs, always getting Connection failed while trying to fetch profile. When I start the game on different profile with no hitman history it connects just fine.

What the fuck. Nobody ever asked IO to make single player games like hitman being always online and it blew up in our faces in the worst possible moment. I bought the game day 1 and haven’t been able to play since! THIRD day of having the game and I can’t play on my profile. Its pointless to play offline and not gather any progress, as we know challenges are achieved only online.

Well that’s true, I also had to change my password before carry over process.

Day 3, still can’t play at all. Thanks IO. This is exactly what people warned us about with always online connections. As much as I love hitman I’ll be getting a refund if this isn’t fixed today, then I’ll buy it when it’s 20 bucks.

Pretty sad you come home excited to play after a long day of work and 3 days in a row you can’t use the item you purchased. This is cyberpunk proportion of failure and an embarrassment for IO.

In addition the team gives no updates and literally has 0… AND I MEAN 0 support. Nothing what so ever.

I never changed my password and haven’t been able to connect yet.

I didn’t change my password.
The takeaway is it’s not PW related, and it’s not the transfer or internet connection. Something about location possibly, but I’m not convinced that it’s that either.

I doubt it’s location related. My friend and I live in same city, we have same ISP, same platform (PS4). His game runs smoothly but mine doesn’t.

tRusT uS AzUre clOud Is tHe wAy to gO!

Single Player games that require online connections to play are a scam. We do not actually own what we purchased, it’s in a server somewhere that may or may not be accessible. When did purchasing a product become purchasing a software license?

True that, i don’t know whats going on with this situation but it is the HEIGHT of impropriety. I really cannot be bothered with this anymore.

I’ve had this problem for about 12 hours now, for it to finally connect me to the sever, I’ve been on for about one hour and it’s went off this is embarrassing ioi address the situation and fix this shit. This is the best game out of the trilogy and here you are not addressing the situation

Honestly they are too late to redeem themselves they have went to long without admitting to a problem and when they did admit to it they lack the understanding of how broad this issue is and how serious it is… I’ve seen some developers claim that you could still play off-line for the time being… So maybe the whole game should’ve been available in off-line mode Like we have been telling them for years. What an embarrassing send off to agent 47‘s last game in a while and I have lost all hype for the 007 game because of this even if that game doesn’t face the same problems there is a little communication between the dev team and people encountering problems

As soon as this is fixed to be honest I think I’ll forget about my anger within a day or two. But as things stand I can’t help feel that we are being forgotten. Even if IOI just sent a tweet acknowledging the issue then gave hourly updates I would feel reassured.

Yeah I will surely forgive but I will not forget the lack of technical prowess that was put towards a very big issue.

As it is right now with the large majority of problems this game definitely should’ve been delayed no doubt in my mind about that. 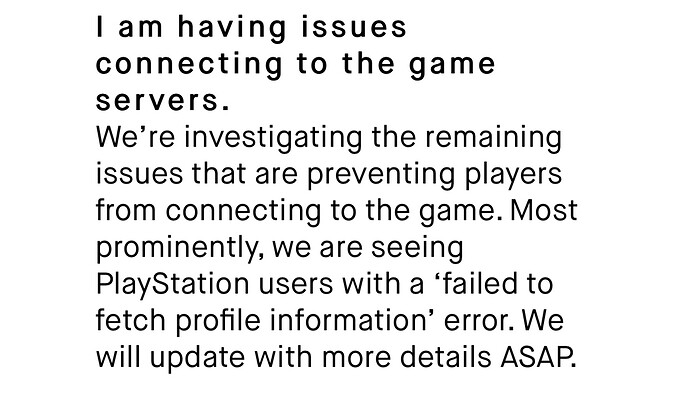 They’ve updated the Post launch Q&A, that’s about it

What gets me is that there was one very honest reviewer who back when he was playing his review copy had openly stated that the server was weak and that even without all the public playing the game was struggling and disconnecting so it should’ve been a no brainer from the developers point of view that the service would not be able to function properly with the huge influx of players and what not on release !