Progression carry over not working

I click carry over progression and it loads a blank page which eventually times out. Anyone else having this problem? I’m on ps4. Don’t want to start then lose all my Hitman 3 progression later.

I’m having the exact same problem on PS5

Exactly the same issue here. Perhaps the servers are overloaded.

same here on xbox one s

Doubt it because I was trying yesterday before release and had the same problem. It clearly still hasn’t gone live

The page has loaded but doesn’t look right and is very slow loading pages.

It is live. It is overloaded.
Try it again in a few minutes or so.

Definitely seems that way. Annoying that I’ll have to lose any progress I make until it decides to load but nevermind. 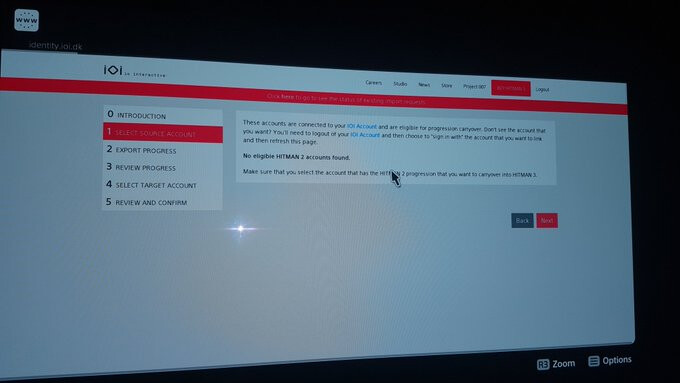 Think we are going to just have to wait for it to sort itself out. I’m going to just play and explore for a bit then go back to it.

But that’s the issue, you can’t go and come back later or it wipes the progress. Day 1 and a mess. GG

More to the point, if you go off to explore, do you ever get the opportunity to transfer progress again?

I’m on the transfer page on both PC and PS5 and no account is detected. Awesome. Going to be honest, even Call of Duty sorted its shit out with backend data sync, go on one platform - your stuff is there. This is a total clusterfuck.

Hope you get it sorted soon. Hopefully I won’t encounter the same problem once I finally get it to work.

Don’t worry guys. There is now a button for those who didn’t carry over initially. It has appeared as mysteriously as an item handed to you by an NPC: out of the ether.

Funny thing. People downloading a game with full speed and then complain that site is nit responding. Finish downloading, give a little time, now too many people try do that same. Launch was just a one hour ago. Give a break pls.

Yup. As well as testing it with the manual login