Don’t know if anyone experience this?

My PlayStation account region is Hong Kong and Singapore.

Launched Hitman 2, clicked the “Access Pass for Hitman 3” on home page, and took me to in-game store page.

After relaunched the game, the option was gone, just like how my screenshots show.

And it says the same thing for every other item in the in-game store.

Similar to how Asia store users cannot redeem the legacy pack from Hitman 1 two years ago.

PS
The website for more info on the screen is also 404.
www.ioi.dk/hitman-access-pass-faq 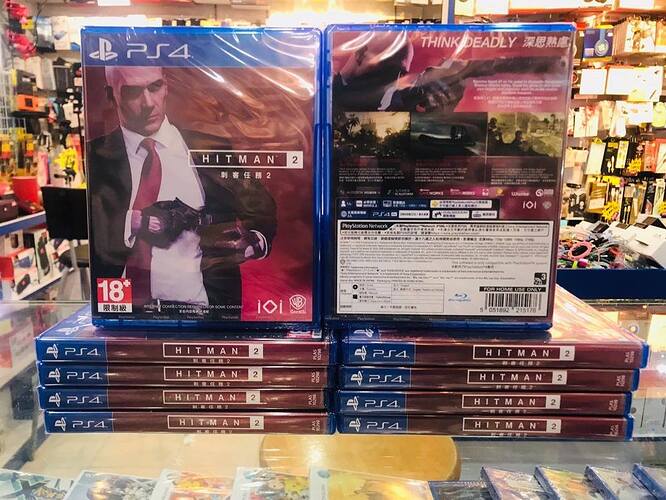 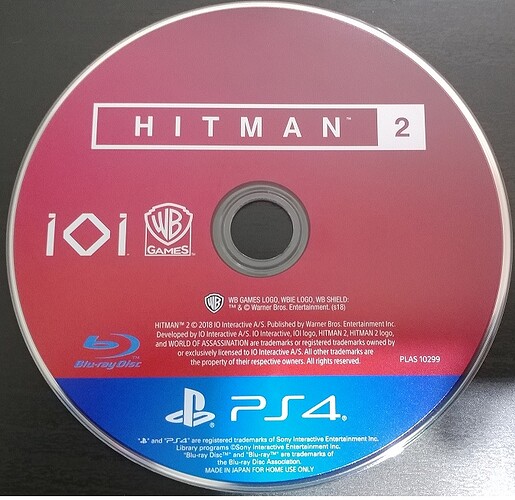 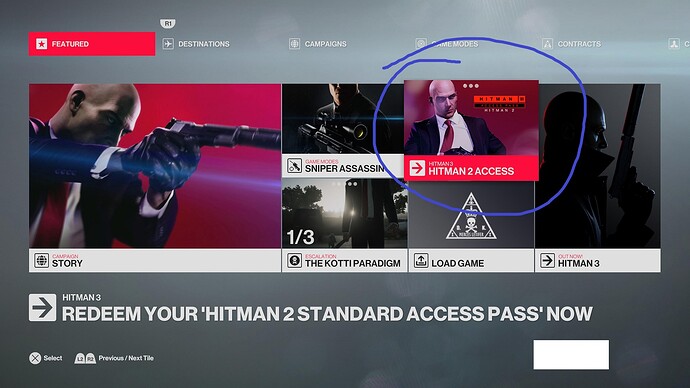 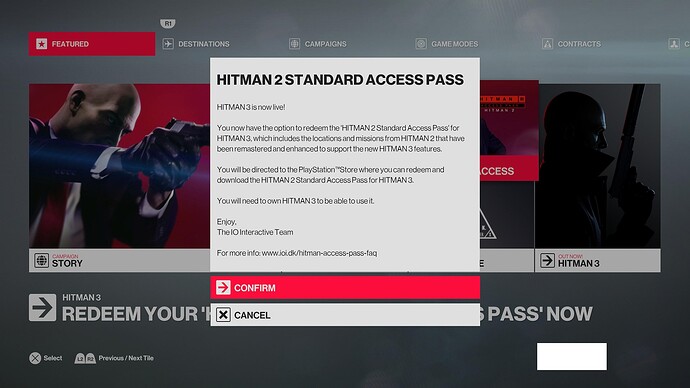 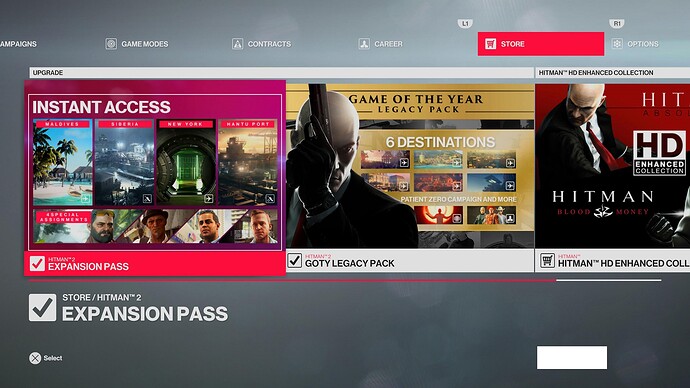 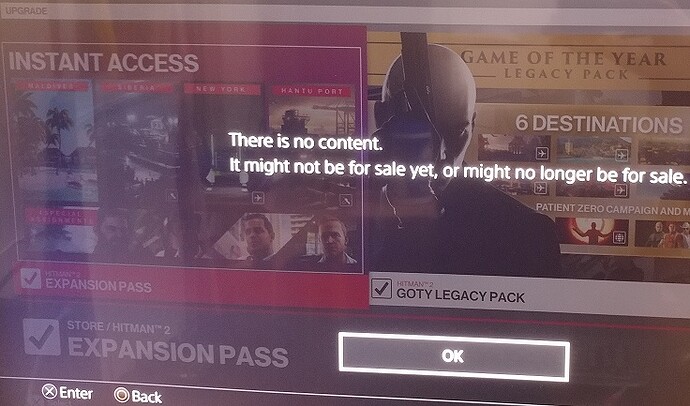 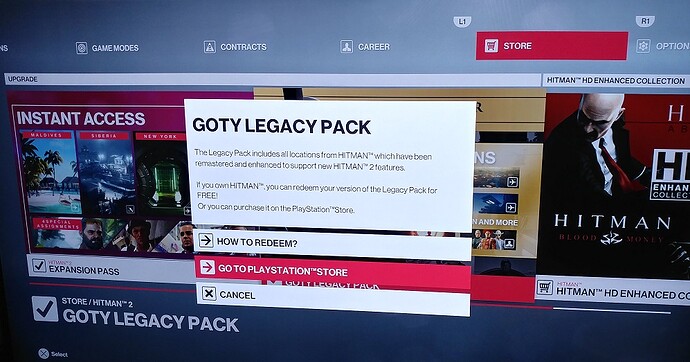 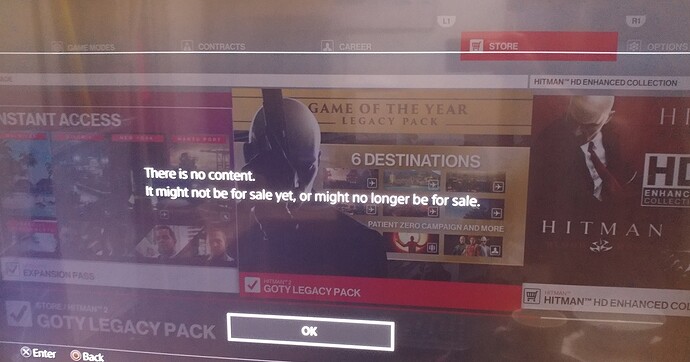 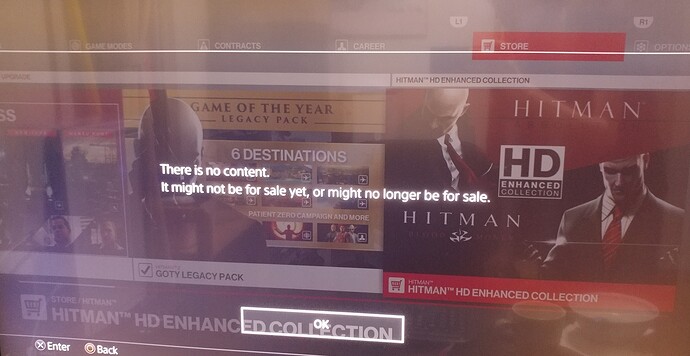 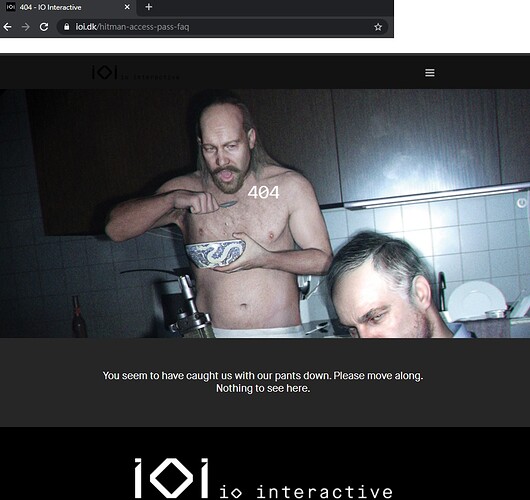 If I’m reading this correctly, you’re trying to redeem H3 content in H2?

That’s what the pre-launch guide says for Hitman 2 disc owner, to redeem the standard Access Pass for Hitman 3.

Have you tried launching H3 with the H2 disk in your machine, and then going to the PSN store to find the relevant passes?

Doesn’t work, and that’s not what the guide from IOI says. Picture 02 clearly says I’ll be directed to PlayStation store to redeem the Access Pass, just that the link is broken, and IOI needs to fix it I guess.

Go directly to the PSN store instead of using the in-game link. Can you see them?

It would charge me because my Hitman 2 is a disc, not a digital purchase.

My screenshots show I own Hitman 2 Expansion Pass, becuase I have the Gold Edition, and I can redeem the Gold Access Pass for free.

But my friend only has Hitman 2, that’s why I’m asking for him.

It would only charge you if it shows a price. Does it?

It will charge me because I’ve already went to my PlayStation store directly and it’s showing the full price, because I own the disc only, that’s why the system won’t let me get it for free.

I’ve also said my screenshots show I’m doing it the right way, but IOI needs to fix the link so it can be redeemed.

and the guide from IOI says the same thing.

Have a look at this thread and let us know what, if anything, fixes it:

r/HiTMAN - Any Hitman 2 Standard Edition on Disc owners able to claim the...

Just tried all the methods in that thread.

And the most important thing is, if you have the Asia version disc, and using an Asia PlayStation account, H2 in-game store’s links are not working, as my screenshots show. So IOI needs to fix it along with Sony so the in-game store would work.

Out of curiosity, is the region of your game disc the same as your PSN account? Might explain why the access pass is not appearing in H2.

Yes, the disc is Asia version as shown by the pictures.

And I’ve got both Hong Kong and Singapore PS account.

The in-game store for Hitman 1(Asia Disc) is also behaving the same, so IOI needs to fix them so they would work again.

I have the Asian Hitman 2 disc but I also have the Gold Edition, so claiming Gold Access Pass was enough to claim all Hitman 2 Access Passes. So, you’re saying that neither the HK nor SG accounts show the Access Pass in H2?

I’m in the same situation as you, so I’m eligible for both H2 Gold Access Pass and Expansion Access Pass.

But my friend only has the Asia H2 disc, and the in-game store showed the option to redeem H2 Access Pass for free only once, and clicking it said “There is no content.” Then after relaunching the game, that option is gone for good.

He tried going to the PSN store directly, both HK and SG stores would need him to pay for H2 Standard Access Pass.

I understand how the H1 part works, just saying the in-game store for H1 is behaving the same, every item in in-game store are saying “There is no content.” It also needs to be fixed so ppl can redeem legacy pack for H2, and thus enabling them to get the H1 Access Pass for H3 for free on PSN. @Travis_IOI @Clemens_IOI

@Lloyd159 got a solution, create a US account and redeem in H2 in-game store, switch back to your main account when playing

Why should I create another account just because they didn’t offer the same thing to me? They should work with Sony and fix it.

everything works okay, but no access to H2 aswell 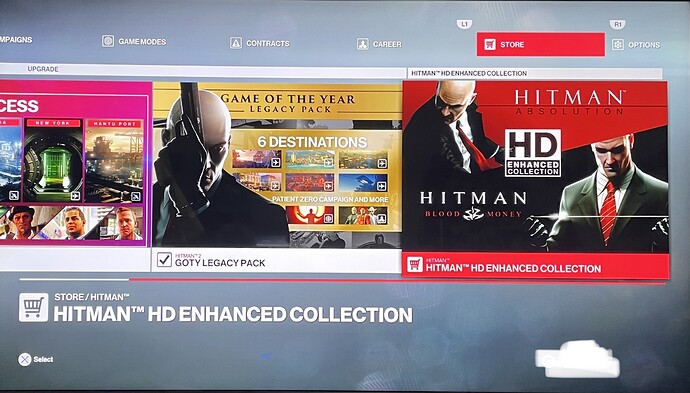 A month and they still haven’t fixed it.

it’s been 16days now, after I post in another thread this “HITMAN 3 - Technical Support”