maybe, but i don’t just play hitman to complete it, and i don’t always play optimally. i really like the fuck around. 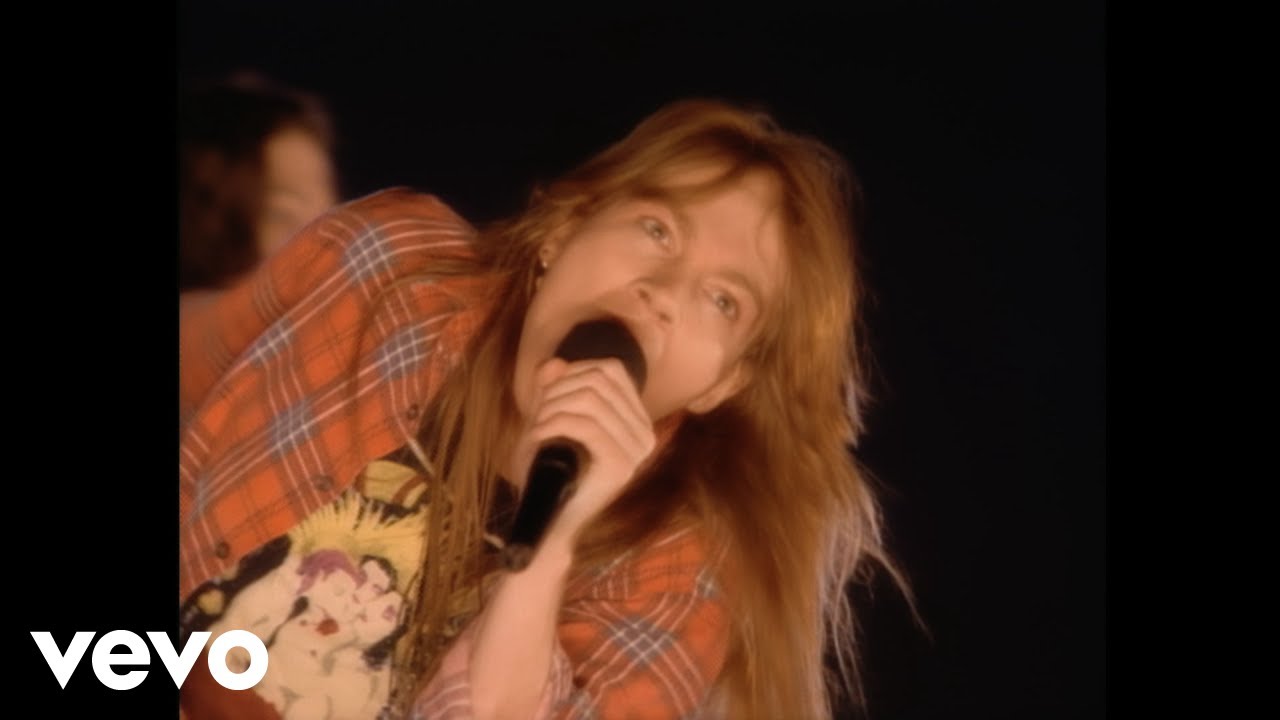 maybe it’s just me, but i really enjoy system driven games specifically because of how the player can manipulate them and in return the game can surprise you. for my money, those kind of ‘procedural’ narratives are one of the key things that differentiate video games from other media.

It’s a thing with me. I’ve never really been impressed by people who “think outside the box.” I’ve always had far more interest in and respect for people who were able to get it done without having to go outside the box. So to speak.

not sure if we’re talking about the same thing here?

in a roundabout way, i’m saying that a series like hitman - sandbox, system-driven, lots of tools to play with - is a venue for player expression, and sometimes i express myself by playing sub-optimally and with no intention of finishing a level. other times, i don’t. i think the freedom and reactivity is what makes the series so enduring.

okay, so coming back to this thread with a clearer mind and having finished level 3 some time ago…

i think i won level 3 on a fluke. i got spotted, panicked, and took cover behind a bathroom wall and just kept throwing lethal/KO items as the bad guys kept coming. setting up distractions was still necessary, but not as much. and i still stand by the fact that carrying a golf club/baseball bat/oar works wonders. it’s the quickest way to neutralize an inhibitor.

oh, and: i was lucky enough to complete the “don’t let the inhibitor reach the top floor” challenges for each level as i went along. otherwise, i would say it’s absolutely not worth it to redo the levels only to get those achievements.

I’m pretty confident that level 3 is easier than level 2. There seemed to be less non-inhibitors and IO actually let you access weapons to fight back. I managed to do it one run after getting my shit kicked in on the previous level for a long time. Getting into a place where the AI can’t flank you (like a bathroom in Dartmoor) is the best way to win a firefight (even if your access to guns is limited) so it probably wasn’t a fluke; once you get to a position like that (which is admittedly difficult in this escalation given the general openness of the location), you’d have do something truly spectacular to mess it up.

otherwise, i would say it’s absolutely not worth it to redo the levels only to get those achievements.

It’s definitely not worth it to do the entire escalation again for one or two of those challenges. It’s barely worth it to do one level over and over and over and over and over again to make sure you get them. I spent a lot of time getting overrun on level 2 but I did occasionally restart it if an inhibitor got too far from me to stop them before they ruined my challenge. I knew I wouldn’t want to do the entire escalation over just for the level 2 challenge but I also knew my OCD wouldn’t let me leave it at less than 100%. I also did the same once or twice on level 1 but that wasn’t nearly as much of a slog. Otherwise, definitely agree with this sentiment.

Had my first go at Level 1 of this today and died during the second wave. I can already sense that this is going to be a not-fun Escalation for me.

I hate being put under pressure in the HITMAN trilogy, I always have the most fun with the game where I’m in control and can approach problems in my own time and via a method of my own choosing. The Wrath Termination seems to be directly at odds with the core power fantasy that makes the WoA so appealing to me, but I guess I’ll just have to slog through it at some point to satisfy my own desire to get 100% completion.

I agree with you that it’s not the best escalation. Like you, I like to take my time.

I advise you to KO one of the “red” guys (they appear red with instinct). The next wave doesn’t start if at least one of them remains alive.
When I did this escalation, I chose this strategy. This way, I was able to “take a rest” between waves, prepare my strategy, recover my tools and weapons, use the nail to grab items from closed cabinets… It’s also a good way to set traps in the mansion without being stressed by the bad guys.

I had to play this escalation twice - on Epic and Steam and this was my winning strategy:

Distractions are the key!

It works for every wave and every level. Yes, luck is also a factor here, but after a couple of tries you should be victorious. Just give it time. Btw, Level 2 is the hardest. Level 3 is not so hard surprisingly. It took me several hours to finish Level 2 during my Steam playthrough but Level 3 I finished on the first try!

Oh, I almost forgot: Save your rusty nails and crowbars so you could open Mr. Fernsby´s room. You can find firearms there (Shotgun in Level 2, Assault Rifle in Level 3). Don´t use firearms before wave 3 (except distraction shots - if some of the enemies get on the first floor, just shoot into the air and they will come down looking for you).

With this strategy all enemies are dead in the end. With Silent Assassin rating.

I had another go, bailed in the first wave of Level 1 again. I just HATE it, probably up there with the Mallory Misfortune as some of the only content that I actively dislike in the trilogy.

If I could I would literally hire someone to complete the Challenges for me and then never think of this horrible, unenjoyable mess ever again. The idea of even starting this stresses me out, but I really want to get to 100% one day. A pox on the existence of this cursed, non-Hitman-y abomination.

You couldn’t pay me enough to play it for you!

When/if you do go back to it, it you think you hate Level 1, just wait until Level 2…

(Level 3 is almost fun, though, somehow

I found that a lot of difficulty was stripped away when I realised that there’s a specific order that the groups will reach the manor, and you can usually completely eliminate them before the next group enters the property (aside from the ones that come through the front door which are generally the last to arrive).

At the end of each wave, KO the inhibitor so you can go around a pick up all the items that they’ve dropped since I found I didn’t have enough time to pick them up at the time, then I would drag the KO’d final inhibitor right next to the area that would open up once he was dead so I could get those items quickly and then get in position by the kitchen side door to repeat in the next wave.

I didn’t bother with any of the accidents/traps. I always went for the throwable lethal items.

After replaying The Wrath Termination today for the first time since it released, I noticed that there’s still a random disguise bag floating in the air above the front of the mansion. I first noticed it at launch, cool to see it’s still there over a year later! 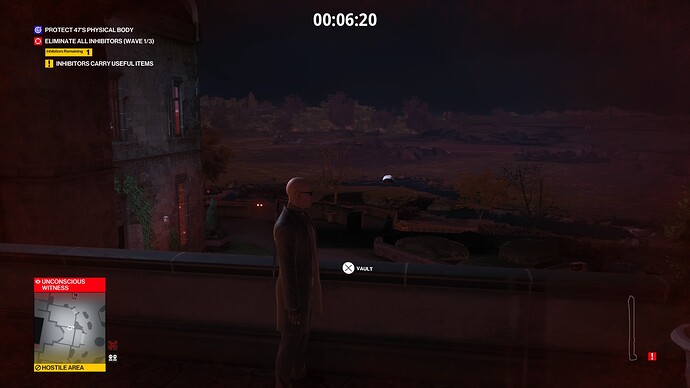 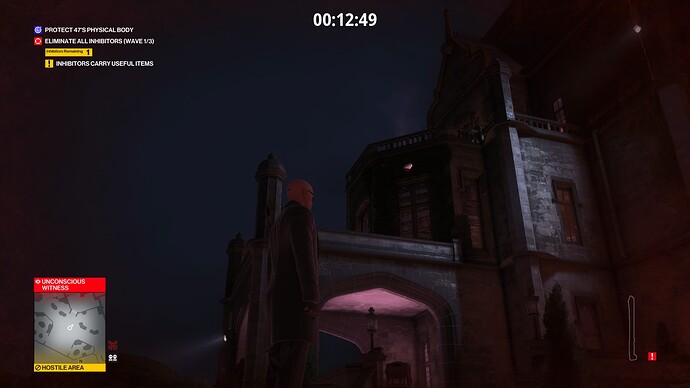 Checking out the Wrath level again tonight… did they change the brightness of it all at some point, or did my level load in weird?
The outdoors are bright enough I can see which is nice, but the indoors is wayyyy too bright! Everything looks like there’s a white filter over it, just because of how much is lit-up on screen. The kitchen is ESPECIALLY guilty of this 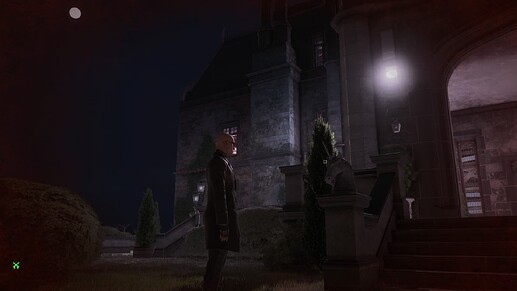 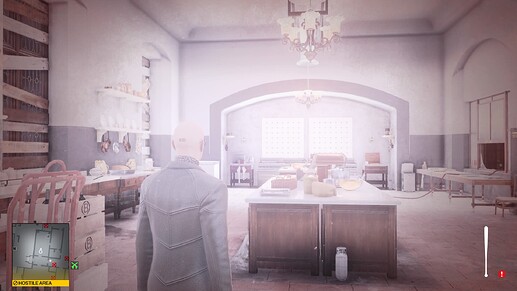 Also with the “Target Info active on All Modes” update, we can see the NPCs names, seems like they’ve been straight up imported from Romania… I found Orson! 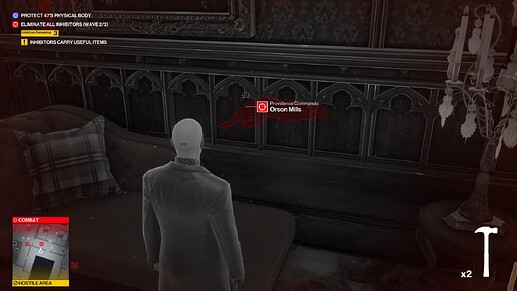 Really annoying i can’t even get screenshots on Wrath, come on!

The outdoors are bright enough I can see which is nice, but the indoors is wayyyy too bright!

People complained that the level was insanely dark when The Wrath Termination debuted. This made Wrath harder than it needed to be tbh. I think they tried to do a quick fix and accidentally overcompensated as a result. I remember the last time I played it that it looked brighter too:

so…did IO get the memo that the lighting was too dark in the wrath termination? everything is glowing now. 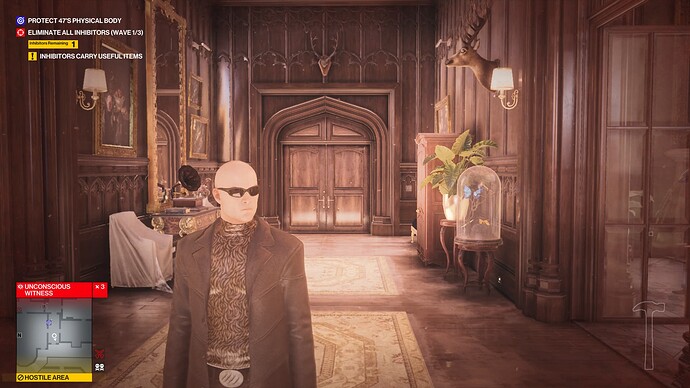 (but not to your extent – seems to have gotten worse)

I don’t think they’re gonna fix it if it’s been this long but who knows. Game lighting is tricky