In leeeeeft corner relentless and unyielding conservatives Silent Assassin should reward more money against - riiiight corner a open-minded progressive logicians Freelancers is a different experience. This battle once again make your eyes bleed and blood boil. Maaaaaake someee noice because Fight of the night begins here!

Joke aside - let’s discus here about Status system, economy and reward system behind Silent Assassin in new game mode. Do you like how it works in Freelancer, and if not - explain why.

SA= a PO (Prestigious Objective), which = a payout.

When you play you may or may not finish with a SA worthy rank.

If you do, but didn’t choose or have the choice of SA PO you don’t get paid.

This seems like a way to limit players from getting Mercers, or maybe getting too many too quickly and taking the challenge out of it.

If there were no PO for getting SA, and you got the bonus M for it anyway… Would that mean there’d be other POs to try to get even more M?

Then there are the conflicting objectives. I think this comes down to the player needing to pay attention and don’t choose a PO for SA if you have another objective that would void SA.

But conflicting objectives can give the player something to fall back on should the other objective fail (like getting SA). And that might not be due to poor planning, but hedging your bets -I suppose. Don’t worry about getting all possible Ms.

Most of this has been said already, and it seems to be a bit of a fustercluck in the possible things a player can do.

Edit: I’m okay with the way it currently is.

I am for SA as an optional Prestige Objective.
Part of the fun of Freelancer for me was playing differently thanks to the game not punishing me for it in payout.

The change I might make is that SA should always be available as an option, not just some times. Maybe you have three possible Prestige Objectives that are randomized, and then a special fourth one which is always SA. You can still only chose one, but if you wish to, it can always be SA.

I think there should be a only one Prestique Objective too choose from three different pools:

But to be honest, more I think about that the more im conviced that current random system is good becuse bring a lot of variety to gameplay.

I’d prefer if Silent Assassin was simply always an option as a prestige objective. Not really sure what else to suggest as a compromise for the differing opinions.

If I can just kill guards (non targets) and the target, it’s just splinter cell or assassins creed.

You think “Silent Assassin” should be most rewarded. And it is! but not in way you want. Each time when you progress campaign its harder - more guards, more cameras, more targets, more enforcers. If you make a mess or being spotted - that area is geting alerted, so next time everything be even harder. And belive me - you dont wan’t that because may rise a diffuculty so high that you’ll fail. So best reward for Silent Assassin approach is that - you will have easiler next missions. So you complete them faster = more Payment peer hour.

Stop thinking about Freelancer as seperate conctrats, but start thinking about whole Campaign / Career. And this is the point what you don’t understand, because your perception is very limited.

If you add sillent assassin as standard most rewarded payment - it make other people think that they play wrong, or not in optimalised way. It also make that most of time you need to choose between: Silent Assassin or make other objectives because of very random nature of Freelancer. That bring to situation where you restrict you self to only one approach. And that will make this mode similar to any other contract mode.

So what the point of collecting all these weapons, equiment which you never use trying to make silent assassin? It would make Freelancer that same experience like any other mode in game but with unlocks for Safehouse. Yawn.

There isn’t any ranking system or leaderboards, so what is purpose of doing everything SA?

My logic of Freelancer is: Client pays for things he want to complete, more objectives done = more payement. But if you won’t care about Silent Assassin, next mission start to be very hard, you’ll fail and loose half of earned money. So better play SA. This is a true reward for makeing Silent Assassin. Its matter of choice and playstyle.

So no, Silent Assassin shouldn’t be awarded most money, because it’s just play style. And since there is sevral Syndicates to choose from with different approach - then you can always choose that which suits your preference - without restrict other game styles.

Freelancer is the best Hitman experience whan I’ve ever had since Codename 47.

Of course, but some of people can’t understand that. They want to see big numbers and glorification after each contract, becase this is a true Hitman experience for them. It’s very blind approach, but my talking here is pointless, some just don’t understand it and seems they don’t even want to.

Then I just hope they start to understand it.

We do understand it. The thing is, you say it’s a limited way of thinking, and of playing. Meanwhile, from our perspective, those of you not wanting to adhere to SA are just wanting to be lazy and play any old way like it’s any old game, and trying to excuse and forget that this is a Hitman experience, no matter how you slice it. SA is integral to the Hitman experience. You don’t have to play it SA, but how your ending score should be tallied, be that in points or actual currency, should be based on the SA standard that is a Hitman hallmark.

We get what you’re telling us. We’re just telling you that you are wrong.

Silent Assassin is still a integral part of Freelancer but its rewarded in different way than you used to. And this is where You don’t understand because you think by big numers instead of benefits from doing silent assassin. It has nothing to do with lazziness but not being forced by SA.

But well, “my side” and IO Interactive seems have that same logic, so I don’t know what about you but I’m going to have a lot of fun with Freelancer. Cheers

Oh, sorry, I flagged the second post to be deleted since you posted twice and was going to respond to the first one. Ignore the flag, moderators, it’s been handled.

Anyway, again, I do understand it’s being rewarded differently. The ultimate point I and others are making is: it should not be. And that’s not just going off of our opinions, that is going off of Hitman history. As I mentioned earlier in the other Freelancer thread, this is roguelike being adapted to fit Hitman, not Hitman being adapted to fit roguelike. And yes, IOI seems to be thinking the way you are… for now. There is every reason to believe that disappointment in how SA is applied, or not applied, will lead to them adjusting the mode to accommodate down the road, if they haven’t already for the version that will be released. And that’s how it should be.

I’m not going to get into either side of this argument as there isn’t going to be a winning side, but I have a question.

How would this results screen (credit @FSMcas ) be modified by IOI to reflect the higher reward you want for getting Silent Assassin? 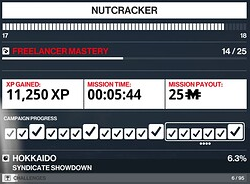 More stars? There aren’t any.
More Merces? Than what? There is already an objective for finishing Silent Assassin - it’s optional but it is the highest paying objective there is.

What reward should be increased? What is the actual solution to the issue?

I don’t really see how Freelancer can always lean towards Silent Assassin the way that it’s implemented. What change could be made to enable it? Instead of arguing about whether it should or shouldn’t be part of Freelancer, let’s talk about HOW it could be part of Freelancer. What incentive should there be that isn’t already there?

And that’s what it’s all about. For example you have four objectives: Each conflict with Silent Assassin, but for each you got M10, and for Silent Assassin M30. You go for SA but at end of the day - you earn less. Do you happy? Probably not and I see there will be a lot of complains that Freelancer is broken, because don’t allow you do standard objectives and silent assassin in one way.

To understand why silent assassin is rewarded differently first you need to understand nature of this new mode (i don’t mean you @schatenjager :P)

The highest payout I ever saw in my playthrough was 60 Merces. That was 30 for Silent Assassin and then 10 for each of three other objectives. I suppose it’s conceivable that I could have done the three objectives and not done the Silent Assassin one, but I didn’t, so I got all 60 Merces.

make the prestige objectives have a multiplier, instead of fixed money reward. No Objecties + Silent Assassin = no money

But if you ask me - this is another thing which restrict freedom of play what I’ve talking about. So I don’t like my own idea hehe.

Im happy with the way SA is implemented as an objective so far.

I feel the absolute worst option is having SA consistently reward extra merces independent of other objectives. I feel that would limit design space for a lot of objectives as the developers would feel obligated to either make the objectives SA-friendly, or reward significantly more merces than they may otherwise like to compensate for SA-unfriendly objectives.

I feel the most restrictive part of SA is body’s found. Freelancer has done a lot to make the variety of items in the game have a use case, and I think a consistent emphasis on SA would hurt the use of explosives and loud firearms in particular.

I think having a system where SA is rewarded the highest would pretty much defeat the point of the gamemode. A lot of the mode revolves around unlocking new and different weapons, weapons that have been added to the game over the last few years, a lot of which are lethal and unsilenced, weapons that go unused traditionally because, for the most part, they negate SA. Having SA be an objective that’s always active and more rewarding than completing the other objectives that they’ve added in gives no incentive to play a different way, as SA always has the highest payout. This, in turn, makes collecting all of the different weapons pretty much useless when you’re only going for SA and aren’t changing things up in any way.

I’m a big SA fan in the regular mode, even when playing casually most of the time my mission is ruined and I restart if I lose SA.

Still, I think it’s perfect as it is in Freelancer as optional prestige points. Different game mode where there are other costs to failing SA (alerting other levels, risk of dying and losing everything) and Freelancer works better with current freedom of approach.