A thread to show your character, disoveries and other cool developments in the new fromsoft game Elden Ring

Starting off here’s my beautiful boy Harry Nagbottoms, but with a scar and eyepatch 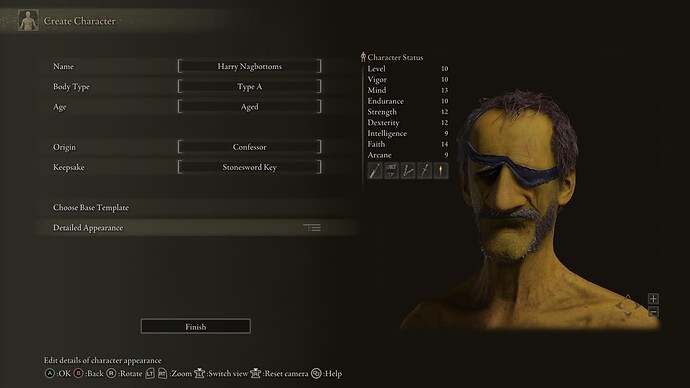 won’t be picking this up for a while because of lack of finance, but i will be following h. nagsbottoms’ adventures closely!

Hes my Dark Souls 3 character but broken and tarnished. He is now in search in the lands between to become the elden lord 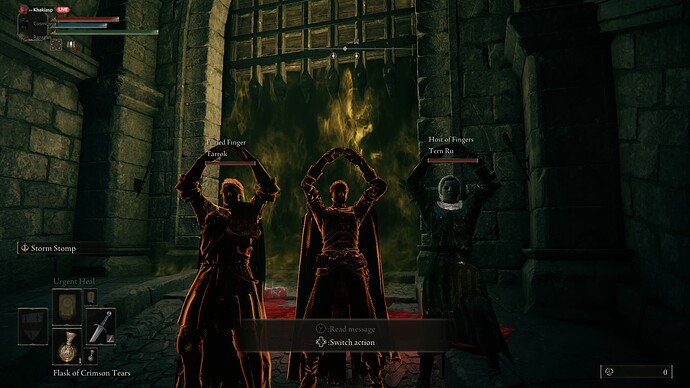 coop is as fun as ever

At this time I’d rather not post anything that spoils what happens in the game, for the first week or so I think it’s best for players to find things on their own- But holy shit are there so many cool things in this game. Waltzing around and finding awesome shit is a fantastic experience. 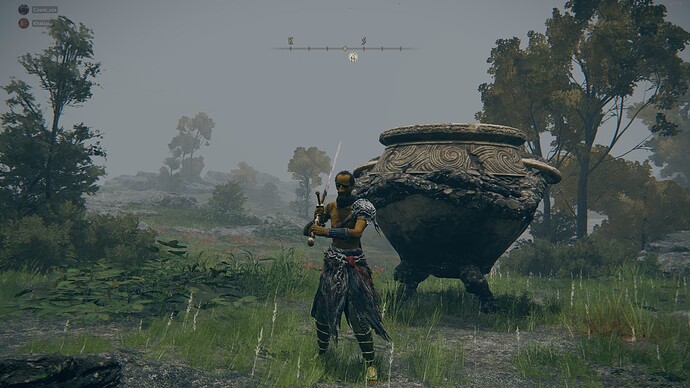 I’ve beaten a fair few bosses and gotten a lot of skills and upgrades. and this game is just getting better by the minute. the small catacombs are great and the bigger dungeons are fantastic. the first real boss, margrit the fell omen was really excellent. this game also looks beyond excellent

I’m 10 hours in, but I’m on PC and the performance is really holding the game back for me. I can only play it for a little bit before getting annoyed by the stuttering and taking a break.

Margrit is a great boss, I was never frustrated while fighting him because nothing felt cheap, it was always me making mistakes.

I’ve heard a lot about the stuttering, but I’ve never really had any, just some framedrops. I do hope that a patch fixes it soon. And yea Margrit is beyond excellent, everything he does is telegraphed well but his floatiness and sudden strikes throw you off in a good way.

Personally on PC the stuttering has been more weird than anything else? There’s no discernible cause, specific areas (that don’t seem graphically intensive at all) cause it or there’s occasional hits for ~15 seconds then it fades. About 95% of my gameplay has been unaffected so it’s not an issue with overall performance, it’s seemingly some bizarre quirk of the game’s code. (that if I had to guess is also linked to the occasional crashes I’ve been getting)

I guess we’ll go by the spoilers of the stuff that’s already in the thread, (I am personally about ~35 hours in, and have reached the end of the first 2 legacy dungeons. I have yet to even see the entire map though) so yes, Margrit is fantastic and a great successor to Iudex Gundyr.

The idea of him being the first real boss, which I agree with, does present a weird thing about Elden Ring- It’s blurrier than ever what encounters really count as “bosses” or not. I’ve discovered fights in this game with no boss healthbar that feel waaay more like bossfights than some others that did have boss healthbars.

I think the best way to break it down is perhaps most “worldbosses” are essentially unique challenges just for gaining unique new equipment whereas certain “Key” bosses that create Sites of Grace on death, have achievements related to them, etc are where the more unique movesets/fight designs come in.

For a different thing to bring up, how are people’s builds going? I’m sadly falling back into my old sword + shield habits though I am sticking with the slightly more adventurous Claymore as the actual sword and fitting more Mirac- Incantations in there. I’ve also noticed that Vigor REALLY appears to be the second coming of Adaptability, it seems mandatory to dump levels in it ASAP.

Yea i think the bosses here can be split up into world bosses ( tree sentinel, tibian mariner, flying dragon agheel )

Catacomb bosses ( every boss you fight in the small catacombs )

Which i think is grear, some bosses are easier then others but i think overal theyve struck a great balance in terms of design and how they attack.

For a different thing to bring up, how are people’s builds going?

After i was all dex, no sex, in dark souls 3 i think im going for pure strength build this time around to bounce of my slightly more agile mixed mage coop buddies. Ive found a few amazing strength weapons like guts’s greatsword and a great hammer and tree sentinels halbert is also a good choice

I am playing as Hitman Agent 47.
Well, like my id with number 47, I play always the character of Agent 47 in every game. 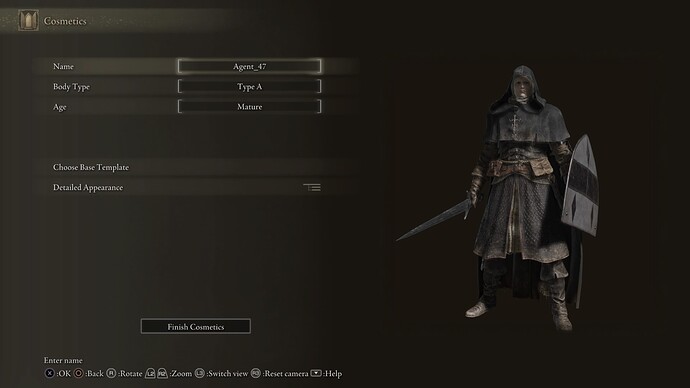 been watching everyone else have fun with this, seething with jealousy and resentment.

lo and behold, the missus bought me a copy out of nowhere. what a love!

the missus bought me a copy out of nowhere. what a love!

its seems your maiden saw your wishes and acted upon them, now then, have splendor in killin’ ye tarnished.

I figured I’d post one of the ridiculously cool things I’ve discovered. There’s lots of subtle NPC arrangements like these and I think it’ll take years to fully appreciate them all. 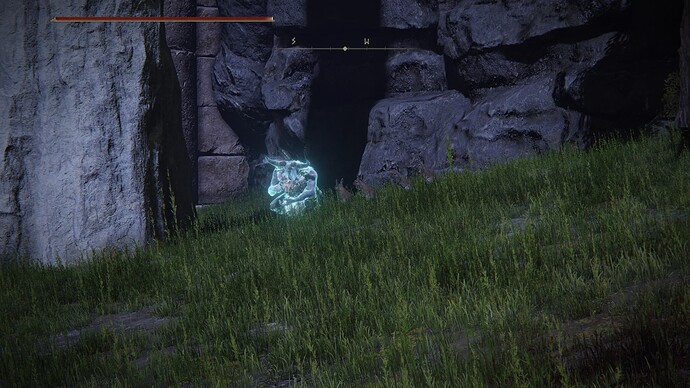 He’s picking berries for his squirrel friends! These guys (the “ancestral warriors”) actually have some pretty rich lore I’ve seen in armorpieces and been demonstrated in a few other packs. They remind me a lot of DS2’s warrior clan, unimportant and generic on a surface level but when closely inspected they might be extremely important 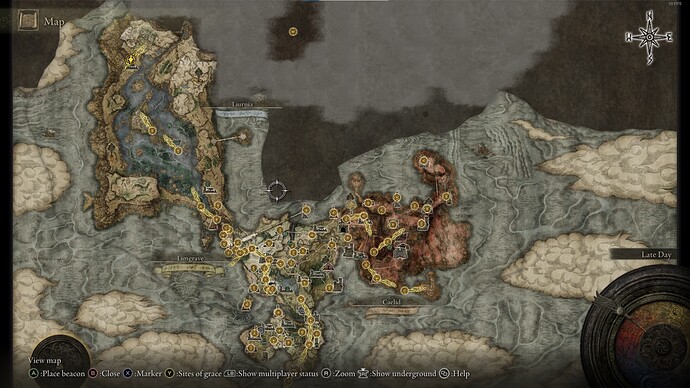 Map update, spoilers obviously. This game is so bloody big and liurna of the lakes is so bloody beautiful despite it being filled with wizards and mages.

That’s a surprising amount of exploration in Caelid, I saved it for later because in my experience Northern Caelid has batshit high tuning like an endgame area.

I have personally gotten the full above ground map, but am far from exploring every zone, and the below ground map still has missing pieces.

At this point (I think I’m in very early endgame?) I’d like to observe something about what I believe to be the ending routes: I won’t spoil ANY plot details, and haven’t reached any of them yet anyway (and are working towards them 100% blind) but I’ll put this in spoilertext anyway:

It appears like the structure is a lot different this time. Fromsoft from Bloodborne onward usually have a couple of “normal” endings enabled by default or very easy to get and 1 complicated ending. Elden Ring appears to have only 1 “normal” ending with every other ending, if I had to guess 3 alternatives, requiring going after specific steps like the previous complicated endings. (One is clearly easier than the other two but still requires going quite far out of your way into optional content)

I believe the “normal” ending is at this stage impossible for me to get due to something I did. I’m HOPING that action hasn’t invalidated me from getting any of the other endings because there’s one particular one I’m shooting for

At this point (I think I’m in very early endgame?)

I’m at Caelid right now since Liurnia we are saving since it heads north. We still have a lot to do, but while Caelid has been punishing for us it’s been very rewarding. We just have field bosses left alongside the main dungeon on the lower portion of the area. So far we are on good track in terms of map exploration.

after restarting starting 3 times because i’m a fussy nelly, i’ve put in a solid 7 hours. haven’t touched magrit yet (same boss as is in the network test), but i haven’t needed to go near it. explored most lumi-whatever, been transported by chest to high level areas twice, worked my way around the peninsula, got an invite to the round table, and am just about to take on castle morne. the things I’ve been through between that…

this is fucking splendid.

i’m dual wielding katanas with quickstep and it is boss.