Welcome to The Username Vault. Throughout the years we’ve had plenty of usernames across all the various things we’ve signed up for. On the forum our usernames make us well us alongside our profile pictures.

This threads purpose is to log the origins behind our prior and present usernames on HITMAN Forum. We all have a story to tell so let’s tell it.

I think it goes without saying that SwingSwang has been tossed around this forum by people. Some people find it more iconic then Swangtheugly and that’s fair, but the unfortunate reality is SwingSwang was a tiny little accident that was caused cause of a Censorship system that school laptops have.

To provide context my senior year of high-school we all got personal chrome-books for the year and these chrome books obviously blocked out specific websites and word combinations.

This ranged between the Xbox website, YouTube being heavily censored to where you can only watch educational content/Sesame Street with the occasional Defunctland (not lying), to the obvious pornographic material. To get around some of these firewalls to watch normal YouTube I had to use some shady underground tactics involving a different search engine and my personal gmail account where I got a lot of my work emails.

SwingSwang spawned from my boss asking why her emails from me came up at 30 Second something something I forget, so I had to change it to something less questionable. Back to high-school though, I first signed up to HMF in the middle of class back in November of 2018 using my personal Gmail now called SwingSwang. This led to it instantly choosing my name as SwingSwang and I didn’t think about changing it to what I really go by Swangtheugly which leads me into.

The OG, Crown Jewel, Cream of the Crop. Swangtheugly was my first ever username for when I got into online gaming back when the Xbox 360 was at its peak. I’m talking about Halo 3, Call Of Duty Black Ops, etc. Now I know the irony behind it. “Swang you aren’t ugly in the slightest” I know this, but the username is something distinct, original, and doesn’t have numbers at the end of it. I have a cardinal rule with Online Usernames. If it has numbers at the end of it, it’s not original.

I have been Swangtheugly for more than a decade now and I want to fully continue with that even here in the forum.

Swangtheugly is my Gamertag and Swangtheugly will remain my username on things for years to come.

Plus it isn’t like my brother who has one of those cringe inducing clan names MythicKilla or MythicSomething I don’t know.

Mine is less exciting. My name is Jake. Jake and Jacob are impossible to get as usernames on basically anything online without adding 10,000 numbers or characters behind it. I had a friend who, for whatever reason, always called me Yacob. The ‘a’ is softer than it would be in Jacob. I tried that as a username on some things and had some luck; now I’m Yacob.

Mine comes from a similar place, a cringe gamertag from way back in the early 2010’s that I used on the 360 for about 5 or so years.

I signed up to HMF with this name because I was incredibly uncreative at the time and didn’t really give it much thought. Time went on and it just became my name. It’s funny because I never imagined that I would be on this forum for very long, I originally came here just to upload one of my contracts way back in the 2017 days of Hitman but that’s a story for another day.

Let me continue then.

I don’t usually like a singer. I have dozens of songs saved but the variety of the singers is magnificently small. And it’s near 0 when it comes to rap. But once upon a time, I saw a music video: I was truly surprised how good was it, at least to me, so there began the background searching about the singer of the song: Hichkas.
We shared the same name, and he had a shit ton of other masterpieces.

Being one of the very first rappers in Iran (starting in 2000-2001), and being known as “The Godfather of Persian Rap”, the effect of his music within the society was unignorably high, specially in teenagers.

But I mostly was inspired by his personality, not the singing. How he dared to do acts that could sent him to jail (Publishing a song/Recording a music video needs governmental permission) and how unlike most of other celebrities, he didn’t keep silent in the 2009 protests and sang a song about it (the he had to escape to UK).

Whatever I say, I guess he is better to talk about himself rather than me; So this is his bio in YouTube:

much less interesting than any of your stories. i read alan moore’s swamp thing when i was a teen and really liked the term the floronic man uses to describe human beings.

it’s in the middle panel: 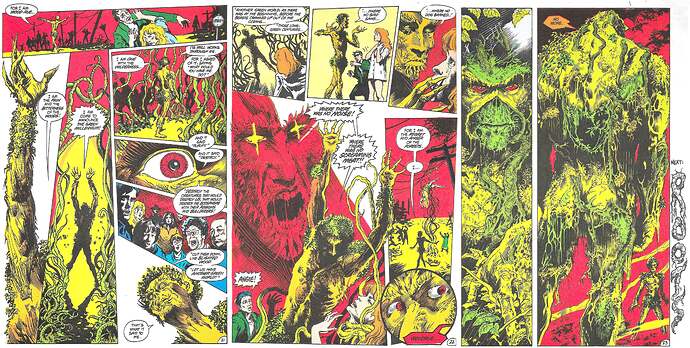 That song is amazing! I looked up a translation/subtitle version - what does the 0-2-1 refer to?

I looked up a translation/subtitle version

Yeah, there are some of those, but not even close to the actual meaning. It’s all metaphoric.

021 is Tehran Province’s regional code for telephone numbers. The whole sentence is in a way a praise of his gang, with 021 referring to their living area.

That song is amazing!

It is… but you could call that a teenager move of his; What made him famous was this one, a social criticism. What makes it more valuable is that 15 years later, you can actually see his words happening… It’s also bumpily subbed. Everyone else’s stories are really insightful!

My username came from the need for one on Just Dance 2, back in 2010. The good old days of the Wii (RIP). Anyway, I hate my actual name so I kind of typed in whatever had been in my mind at that point. Looking back, I think it came from the song “Video Killed The Radio Star”, which was teased for JD2, but was later scrapped to be put into JD3. It doesn’t have any legit pronunciation either, it can be read as videos-t or video street 🤷 idc lol 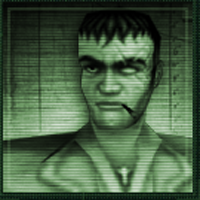 It doesn’t have any legit pronunciation either, it can be read as videos-t or video street 🤷 idc lol

i read it as rhyming with toast

As for me, there is nothing interesting in my username. It’s just my actual surname. ‘‘Grom’’ = ‘‘Thunder’’, so Gromova is just a simple and standard word formation for a surname in our country. I’m absolutely comfortable to use it as my signature or ‘‘nickname’’ for my artworks or other areas.

The origin of my constant nickname in games (Fafnesbane/FafnersMark) is even more interesting, but this topic is not about that

Mine is really simple.
Back in like 2004-2005, people started calling me “Slick,” probably because I shave my head bald. I have attached a bunch of “titles” to the name over the years.

Currently, I represent a website called R.A.G.E. Works. If you have seen my HITMAN videos, you know I speak on it at the beginning and end of every video because we do “rants about gaming, entertainment and the works.”

Back in 2011 and 2012 I was watching my brother’s bootleg subbed Dragon Ball Z DVDs and then in 2012 I made a facebook page as all teenagers did for some reason back then. My page name was originally named after Frieza (I used the localisation spelling because it was what I was used to). There was more to the screen name but the Frieza bit was the shorthand everyone called me.

I started to distance myself from that name for obvious reasons (I’m not 18 anymore) and by around 2013/2014 I was pretty much just Freezer. It was a nickname my Internet friends called me even if I didn’t use the facebook page associated with it. It just sort of stuck.

For the last several years it just stuck to my Internet handle. It’s on my Twitter, my main email address, here, Steam and Nintendo online. I am fine with the name, it’s just second nature and a lot better than younger me’s attempts at usernames.

It warms my weeb heart that you use the proper spelling!

My only exposure with Dragon Ball now is MistareFusion on YouTube so it’s on brand for me to stay away from the Frieza spelling now.

In my head it was Vid-E-ost

There are too many ways to say it now

You were wise to take a simple name such as “Yacob”

Mine is also very simple. Djuka is short version of my real name and k is the first letter of my surname, hence djukak.

It all started when the hotel receptionist asked for my name…