The Mystery of the Meth Lab (Sapienza)

Felt this would be fitting in its own thread, and since the important content of this mostly pertains to HITMAN 2 I think this is the best category for it, despite it being in Sapienza.

There used to be an unused file in HITMAN and HITMAN 2 containing a level addition which added a Meth Lab (and related NPCs/areas) to Sapienza. 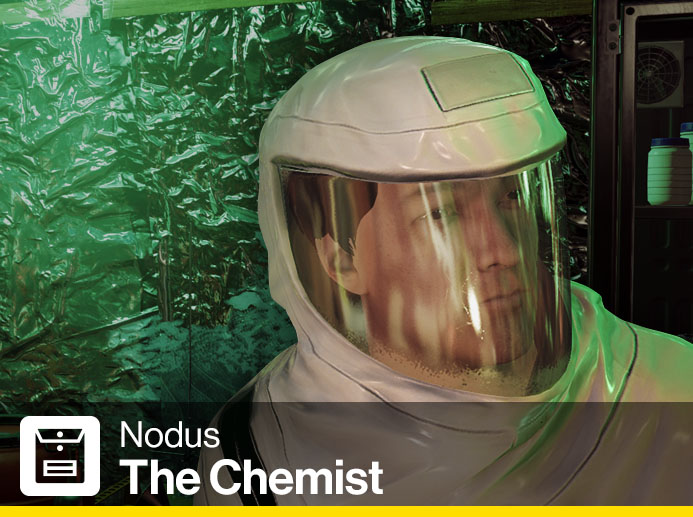 The mission’s codename seems to have been Nodus, with a target called “The Chemist” by the name of Gualtiero Bianchi.

Putting his NPC ID into an objective returns this briefing image: 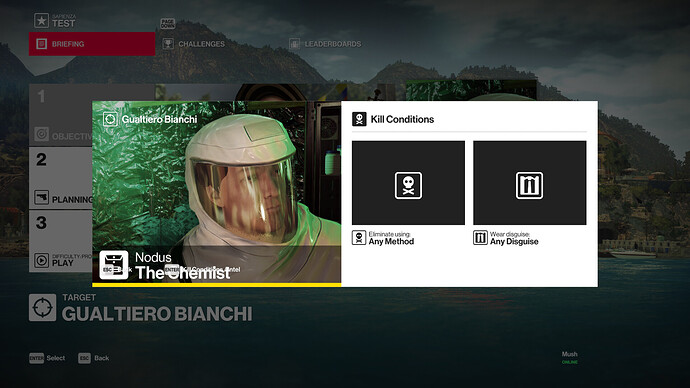 This brick has been present in every version of HITMAN since the 2015 Alpha: 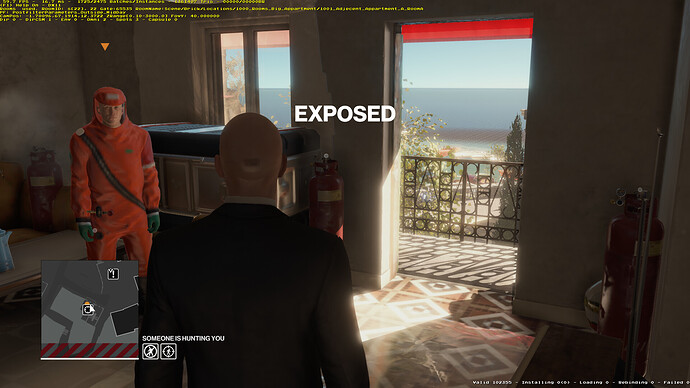 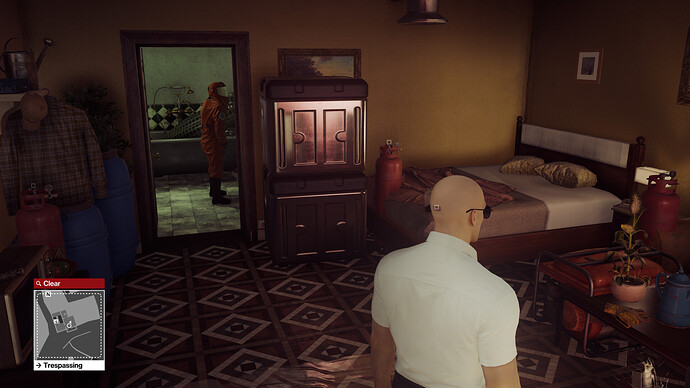 In the original version of the file, there seems to be a single NPC in a normal, orange Hazmat Suit occupying one of the Apartments in Sapienza, there are a few Ether branded crates in his room, some gas canisters that can be sabotaged, and a generator that can be tampered with.

These seem to be the only changes to the level, everything else seems the same.

However, in the HITMAN 2 version of the file, there seems to be some considerable changes to the area surrounding the church, the sewers, and the apartment building from before. The apartment building seems to be a lot more completed, with keycards blocking the main entrance as well as the entrance to the apartment. Guards have been added outside key areas, and our main target has now been added to the apartment, this time wearing a distinct white Hazmat Suit with a red shoulder stripe. 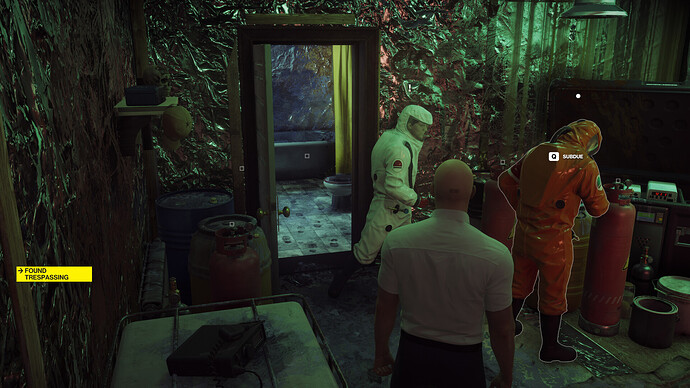 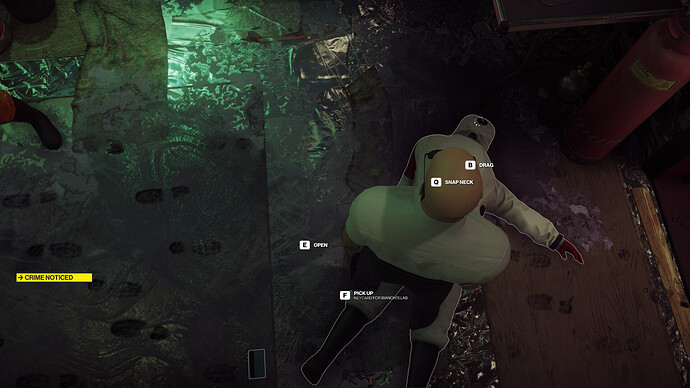 Harming him causes him to drop the keycard for his apartment building: “Keycard for Bianchi’s Lab”.

There seems to be a (somewhat complete, but broken) tutorial added that demonstrates item durability, sound, and speed. My assumption is that this would have given items an advantage (for instance, the “ICA Titanium Crowbar”) over others (“Old Rusty Crowbar”).

The values for durability, speed, and sound for items are still present in the game’s repository file, but seems to be unused, as all items in the current game have the same stats. 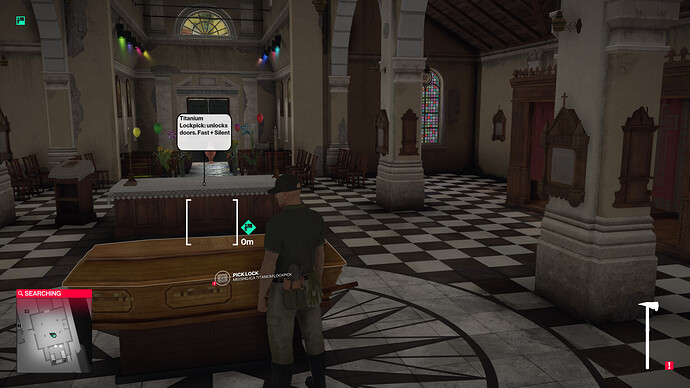 The reward for completing this tutorial seems to have been a special long briefcase “Sniper Case”, that (by its description) seems to have originally been able to hold a briefcase within itself. I imagine this mechanic was scrapped because of its redundancy, and is not present in the game or in the Methlab level file. 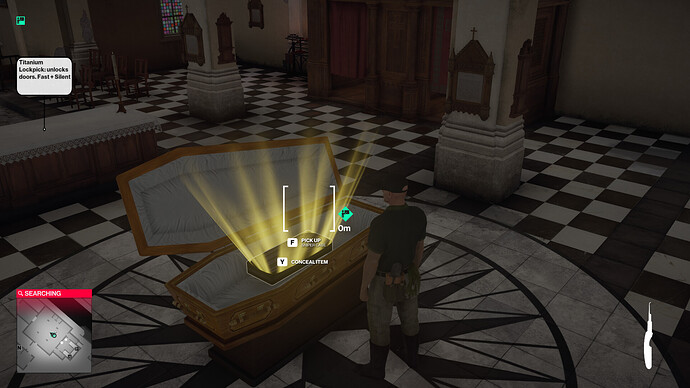 There is also a mysterious button added in front of the well by morgue with the text: “I WIN GREENLIGHT”. 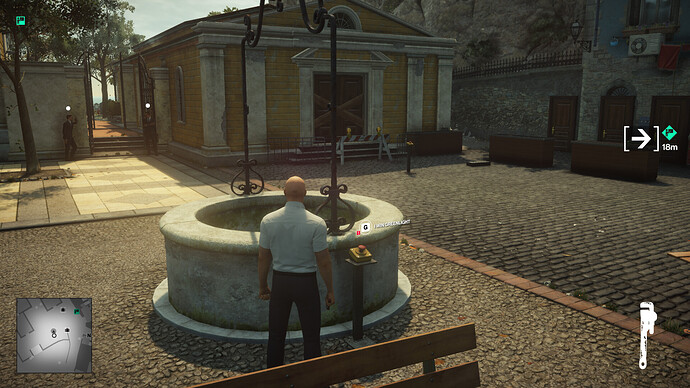 When this button is pressed, it seems to kill Francesca de Santis and Silvio Caruso, most likely to complete those objectives so developers could exit the level.

So, how can you load this magical file from HITMAN 2?

Well, unfortunately, at some point in HITMAN 2’s early life, IO was made aware that this file was still contained in the game, and it was removed in the 2.14 patch on 25 February 2019.

So, the only means of playing with this Meth Lab, is by downloading an old build of HITMAN 2 (ideally, 2.13 from 30 January 2019, as this was the last patch containing the Meth Lab and the first patch to remove Denuvo), and to replace the current game’s files with the old build.

This of course means that you would not be able to play this online, or even with server emulation such as LocalGhost, sadly.

Maybe at some point we can see this content, or an iteration/reimagination of this idea appear as legacy content in HITMAN 3, or modders will figure out how to reinsert the file back into HITMAN 2 and load it on a newer patch.

Thanks to the modding community, Swixel, @Notex, @Atampy26, and @Kevin_Rudd, among others for helping me discover the bulk of this information.

i think its pretty interesting seeing a fleshed out testing grounds for these mechanics. even though all this stuff was scrapped, i still think seeing into their thought process for some of this stuff is cool

Interesting find. It would be cool if such generated but scrapped assets could find their way into HIII eventually

At best as complete bonus mission, or at least as an ET. Or they release a B-side collecrion of missions

I personally have a strong suspicion that this will find its way into H3, possibly Chongquing. IO have pretty much confirmed that they’ll finally be using that Mumbai DJ disguise by giving us a club level. They reused unreleased ETs in Patient Zero.

If nothing else, this was the prototype for the drug-den part of Colombia. 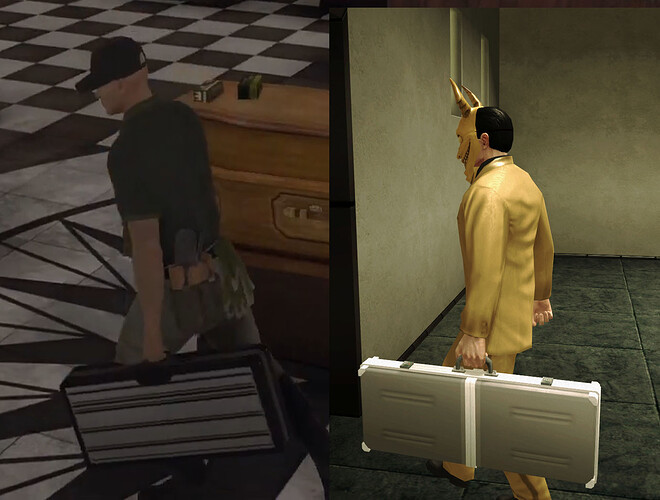 I’m more interested in the fact that a bloke with black hair is wearing 47’s Devil Suit. Perhaps we have an ex-target’s disguise!

That would be Anthony Martinez from Blood Money, from the mission: Dance with the Devil.