I’m interested to know what your preferred next location would be, should a new map ever be released after Freelancer mode.

The maps added to this poll are the ones that have been seemingly talked about the most in order to narrow down the statistics of the general consensus regarding what is most sought after. As I’m relatively new to this forum, let me know if I’ve missed any other heavily requested locations and I’ll add them.

Yakuza Casino with in Tokio, during a rainy night

I need that more than I need my inhaler.

How about a snowy airport with a casino, nearby Ski resort, and underground cruise ship being tested out before going to sea? Such a convenient occasion, since an opera is taking place to commemorate [insert event] near the casino!

Something snowy, but I am not part of the ski resort club. I would like some frozen industrial facility.

Long ago I posted the idea somewhere, but I think what would be nice is a oil platform combined with accessible ice floes and a parked ship, maybe to transport oil or provide maintenance work.

Choosing between an Airport or a Casino is really hard.

I’d love a rainy, London airport with all of its security and shops, and it has loads of opportunities for kills.

A casino would be awesome wherever it is, we’ve already done Vegas, so I’d love to see an Asian Casino like MrOchoa said

We just need a snow map, that’s all that’s missing from this Trilogy, every time there’s snow, there’s a catch

Situs Inversus is one of my favourite maps to date, but I don’t think it the snow map people are looking for considering that the majority of it takes place indoors.

I just love the idea of an airport mission. I’ve always gone over scenarios in my head about how it could all play out.

Imagine that you only had a certain amount of time before the target boards his flight and you’ve got till then to complete the mission. Hopefully one day it’ll happen.

I want something like The Bjarkhov Bomb, mostly outdoors and what @MrButtons said

Every time someone mentions an airport map I get Splinter Cell: Pandora Tomorrow vibes, it’s final mission taking place in LAX during sunset. I’ve heard IO state that they considered an airport level but couldn’t find ways to make it interesting. I don’t know. I think they underestimate themselves.

I loved Pandora Tomorrow and that mission was sick. If not an airport mission, than a snow mission always goes down well.

PS: I think the time limit could be overlooked if it’s set during a storm and all flights are delayed. It would make the setting more…juicy. One problem being that as it’s a sandbox map, I’m sure people would be tempted to go on killing sprees. The outrage would be monumental and in poor taste in light of past terrorist incidents. To counter this, IO could set a mission parameter wherein you absolutely must not kill civilians as it would cause an international affair. 47 ain’t no terrorist.

Fans ask for a snow map, IO says the Train one has snow.

I picked Ski Lodge, but that’s assuming there’s going to be a forest with evergreen trees. It could even have a mechanic similar to Dubai. If the targets escape via skiing down a hill, you could trigger an avalanche.

Yet, a dwelling place like a lodge has probably been done enough. I mentioned in another topic - of how we could have a forest, but maybe with guards roaming around as they do on Hawke’s Bay.

I think the easiest way they could add a genuinely snowy map would be to take a primarily outdoor location like Whittleton Creek and just add snow to it. While i don’t think a snow map would actually be very good in practice, many have pointed out that the number of items they’ve given us that are meant for cold weather sort of begs the question as to why there isn’t at least one map where they’d actually fit in.

The winter sports outfit, ice axe, that white parka suit, etc. all would fit ideally into a white, snowy map. They’re simply out of place almost anywhere else.

Went with a snowy map just so everyone will shut up about it, but went the ski lodge route because I’d like the opportunity to sabotage a ski lift and make a target move into an area where they’ll get hit in the head by an incoming snowboarder.

Plus, you know those outlandish Easter eggs in some of the levels, like the kraken sinking a ship in Sapienza, or the UFO exit… well, I thought it would be really cool if you could trigger an event that makes the target wander off on the snowy mountain by themselves and then the Abominable Snowman comes out of a cave and just mauls them. Wouldn’t that be an awesome gag assassination, especially if you didn’t know about it and triggered it by accident! Imagine, some poor schmuck playing the game, not knowing what they did, just knowing the target is wandering off by themselves for some reason and now they have to follow them, and then they walk around a pile of snow and see a Yeti just throttling the target like Chewbacca choking out Lando. A live reaction of the player on YouTube would be priceless.

Thinking more about other snowy locations, we never been to a purely scientific location so far. A quite extensive facility is the Amundsen–Scott South Pole Station.
It features two telescopes, a unique neutrino detector, a power plant, a larger building and a few other buildings around. 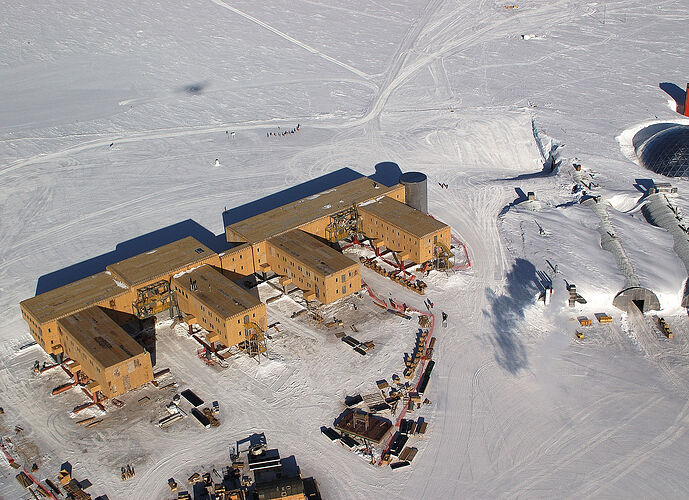 I mean it would be cheap to just copy that and not fun to run for half an hour to each building ingame, but IO could tidy it up a little, add more interesting architecture and such stuff.