I hope you brought your knife throwing skills for this one, because it’s you versus boxes. Yes, boxes. And you might ask yourself “what’s in the box?” Well there’s only one way to find out. 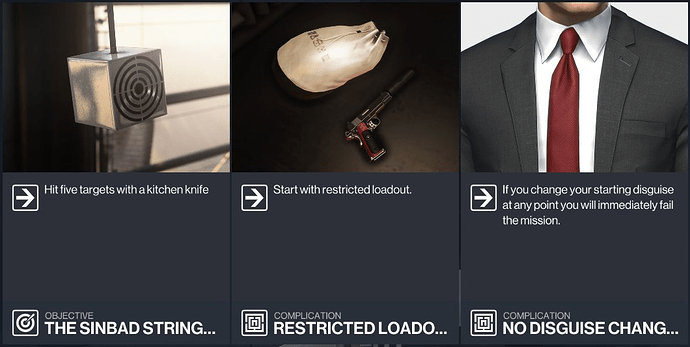 The general idea of this escalation makes me think a lot of The Corky Commotion. But Clemens quote from the roadmap makes me think we’ll probably be knocking boxes down, collecting what was in the boxes, and using those to eliminate targets

sounds like it has potential (at least beyond a glorified contract)

I believe there may be a bug

Does anyone else have this?

Just got to level 2, this is real strange

I see as complication on Level 1 (PC). 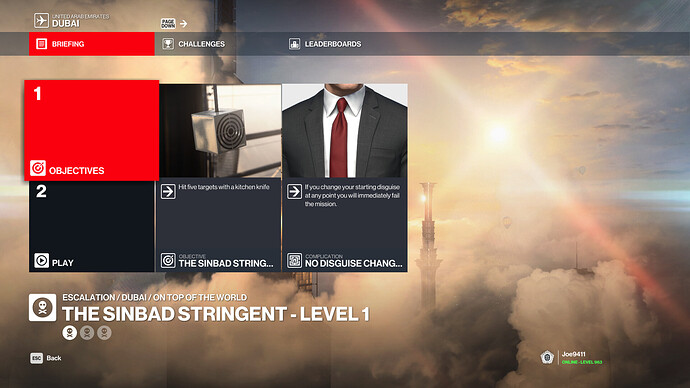 I’m guessing there’s no kitchen knife unlock as a reward.

why is it your second favorite?

cant play it for a bit

Oh I misread your post. Btw I don’t think is bugged, maybe they just want to mix a little bit.

When that came up i was like “oh shit”

guess I learnt my lesson there

@cake941 there was a hidden objective that significantly soured my opinion of this escalation actually. Trying to work out how I feel about it now

Trying to work out how I feel about it now

PUT DOWN THE KITCHEN KNIFE!!!

Well. This is one interesting escalation. Can’t wait to try it later.

So i keep falling off / through the map when trying to ‘vault’ a ledge near the target outside of the window, great view though.

The last objective was quite surprising and made the level 3 much slower but otherwise it’s an ok escalation. I tried to arrange the FaceTime meeting with Grey but it didn’t let me seal the room (and Stuyvesant’s guard also didn’t want to leave so I had to lure him out).

I noticed it too. In any case, killing with a knife does not affect the final result.

I thought beforehand that hunting boxes would not be that interesting, but this escalation is extremely well done in my opinion (even though there are some bugs like the objective in level 1 being called level 3, and the thing pointed out above). I was determined to do it without knockouts just to see if it was possible (it is, and not that difficult) so when the hidden objective popped up, I was surprised in a good way. Luckily, I managed to to the third level in one try, so it wasn’t too slow

I can see why others have problems with the hidden objective, but for me personally it just added to the fun (I had never seen him do any routine in that part of the map anyway besides him beelining to the meeting, so that was an added bonus). Some of the fun is probably due to inexperience with the map, but it is definitely one of the best for now (which isn’t saying much, given the small sample size :P)

But if you use the sniper you fail the escalation. You’re are allowed, however, to kill the target before shooting all the boxes. Unlike that one escalation from Hokkaido with the safe.

Overall this was a very interesting escalation. Had lots of fun trying to figure out the best approach for each level. Unlocking the shortcuts defiantly makes Level 3 a lot easier.