Let’s talk about unrealistic things in the Hitman games! Not the story, it’s fiction and it’s clear that there are things that aren’t realistic. I want to talk about the gameplay!

I know, it’s just a game and it’s normal that some things are unrealistic. It’s not a criticism, I just thought it would be fun to list all the things that are unrealistic.

I will start with one thing and I’d like to see you to continue the list. Have fun!

Thing that always seemed to me unrealistic is when you hit people with some heavy object and they just “fall asleep”.
I believe in a real life if you hit someone with a hammer or other heavy thing right in the temple, he will die of a high chance. Especially with a strength of Agent 47

ICA HQ in Chongqing. How and why did they build such an “inconspicuous” underground facility, why is it so futuristic and has tons of underutilized space, and most importantly - do they really need big ass TVs showing ICA logo 24/7?

Yeah or at least they will have some bad wounds

I mean a classic one is

The elephant in the room. The barcode on the back of 47’s head doesn’t attract suspicion.

Yes! And when they don’t come back, people who stood nearby don’t care

The fact that (conscious) people insta-drown the moment they hit the water.

ICA HQ in Chongqing. How and why did they build such an “inconspicuous” underground facility, why is it so futuristic and has tons of underutilized space

My mate: Yeah, so the doctor’s said it was pretty bad. I’m not sure how I’m going to…

Me: *walks away mid-conversation and comes back a minute later without a word*

Me: Sorry, thought I heard a wet fish being thrown at a wall there. Please, continue what you were saying

To add something to the topic: People take 47 as whoevers’ clothes he is wearing. Nevermind the person had grey hair and a moustache when you last talked to him a minute ago and now is bald and shaved.

I like that even more when it’s not just some random member of staff they’ve only met once or twice, you’re disguised as someone they evidently know! They’re still like “oh hey Brian, my best friend since childhood. You’re looking a lot slimmer and balder. So how are the kids?”

Speaking of that tho, in Berlin when Montgomery knows it’s 47 in disguise, because he knows 47s gimmick, but still plays along was a VERY cool moment imo

Or, they are talking about something private, there is a sound and one of them goes looking for that noise and literally never comes back. And the other one is like „okay, he’s gone for one hour now, but it’s okay, I will just wait another hour and than I will tell him the end of the story!“

When someone immediately dies when they get pushed into the water

Witnessing a murder or death is only a minor inconvenience to everyone’s job and daily routine.
Just wait a couple of minutes and it’s like it never happened.
Guards will continue to guard absolutely no one even if they are fully aware (in game logic, saw their dead body) their employer is deceased.

Every guard’s outfit seems to fit 47 just right; seems in every maintenance gig, hotel, or militia, the requirements come down to specific heights and body type, and it’s very convenient that 47 was engineered to be the same fit for these uniforms

I killed Heidi in Bangkok and Jordan Cross watched the guards bag up her body. A few moments later he asks, “Where’s Heidi?”

Holy crap, speaking of Bangkok/Heidi Santoro, I just discovered this thread and have the perfect thing for it!

As a newly-minted audio engineering grad/guitar pedal nerd I have to say oh my GOD Heidi’s pedalboard is simultaneously the most stunningly bizarre/hilarious thing I have ever seen in my life: Seven units, one of which isn’t even on the board, and another which I’m sure is supposed to be some kind of power supply.
All of them except the big one seem to be the same combination boost, delay, and some sort of flanger/phaser laid out haphazardly, oriented every which way is only acceptable if you’re struggling for space. Looking closer, five of them seem to receive power through the input jack which is just going to cause SO MUCH interference in the rare case you get it to work.
Finally and most confusingly, there seems to be some kind of input/output jack labeled “DRIVE.” Now the only time I’ve ever seen drive used in an audio engineering context is overdrive, and that’s usually a knob. I’ve no clue what a drive jack could do but I’m curious. 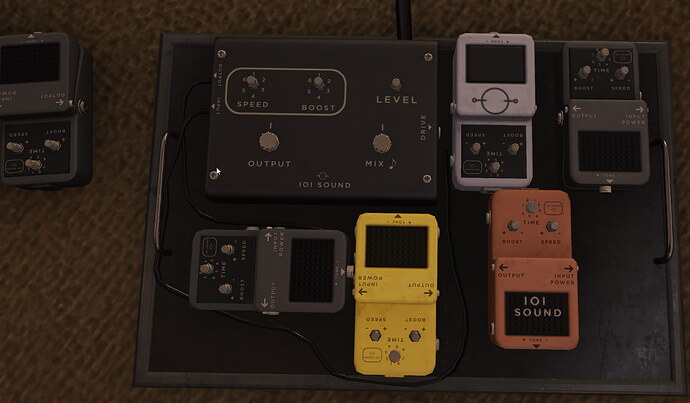 And can be lured even farther if you then throw another object (repeat many times over).

47s magic pockets that can both hold and conceal way too many items, even if he’s wearing a swimsuit.

In Dubai he could hold +15 gold bars in his pocket which is insane considering each of the gold bars must weighed at least 5kg.