Who is your most killed non-target?

The man who gets a job offer from Morgan in bangkok, I like to imagine that 47 is basically Patrick Bateman.

literally any of the guards at the start in TDDUP in blood money, the ones who shoot the crocodiles.

This model in Paris. Specifically with a kitchen knife. 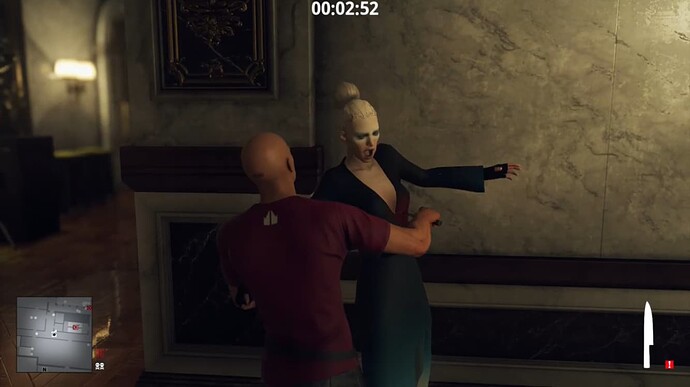 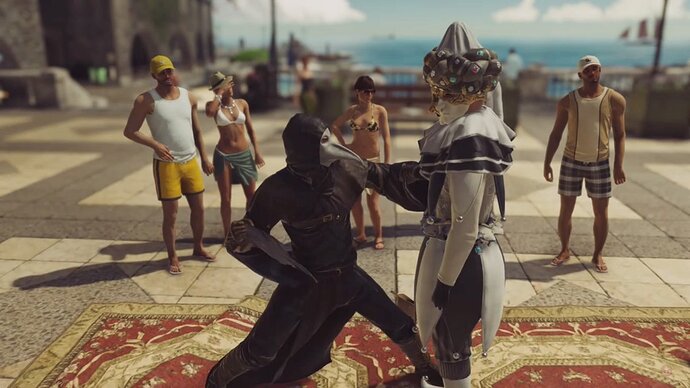 … seems a duo performance is in progress… The audience at the back is enjoying (instead of being scared).

BTW the most killed is the “Have you seen a girl around” lady, in fact I stopped taking that starting location

Sapienza, the leftmost guy fishing on the speedboat pier.

Whenever I’m doing a run where Silent Assassin doesn’t matter and I take that exit, I always kick him into the water, before running to the speedboat giggling like an idiot

My most killed non-target is probably the guy in the laundry room on Dubai. Doesn’t matter what I’m doing I will enter that room and kill him on purpose, I haven’t even made him a target on a custom contract yet because I like killing him every time.

For me, it’s probably Lucy Philips in Dubai
« Cornelia Stuyvesant ! Oh you’re here ! How wonderful ! ». I walk past her every single time I do the mission and now I think this dialogue is stuck in my brain or has merged with my DNA

Judge Strickland in Hitman Absolution was one of my most killed non-target NPCs. I typically took him out from the back of the courtroom with a silenced firearm and amazing nobody catches me (sometimes) nor even knew right away that someone died. However the baliff and the female court recorder heard the impact but didn’t know what it was. The bailiff was like “stay here I’ll check it out” and the court recorder was like “uh-uh, ain’t none of my business” and sat back down to do her thing as the guard investigated. Guard spotted the deceased judge and grabbed his radio as he said “oh man, we’ve got a dead body.” The female court recorder immediatly stood right back and watched as the bailiff checked the judge’s body. He confirmed the death over the radio, the court recorder ran into her office crying in terror, and all the guards in the court house gradually go on permenant alert.

Another was taking out Sergeant Myers in the abandoned library by throwing the knife which Blake Dexter left in 47’s hand to frame him for the maid’s murder. The Rookie reports that he just witnessed a murder, checks the Sarge’s body, and then everyone went on alert - well higher alert anyways.

Ah… One more i see, won’t you join us, sir?
Ah, i see someone’s in a hurry to get inside.
WELL NO ONES PUTTING A GUN TO YOUR HEAD.

One of my non-targets to eliminate before the later games came out was my contact who provides me with the powerful M195 sniper rifle in The Motorcade Interception in Hitman 2 Silent Assassin. I end up turning that weapon on him so I won’t have to pay him for it. Of course the shot alerts the guards and I end up paying with my life so…

I honestly have no idea who that would be for me.

The rating system as it is right now in Hitman 3 is not good. You take one step into a trespassing area, without knowing it’s a trespassing area and lose Silent Assassin. Also, the rating screen after completing a mission barely tells you anything. I wish it would tell you exactly how many witnesses you had, how many bodies found, bullet impacts noticed etc. The rating names that were in the older games are nice but the rest of the rating system is still not great. Edit: Also, maybe more stuff …

someone suggested to have additional measures be taken into account for the final rating of a job.

While I personally wouldn’t want that, I though it might be a cool statistic just to look at.
I think a counter and a separate statistics page for highest amount of eliminations across all NPCs, could be an interesting idea, too. At least then I would be able to answer the question

I play Mumbai a lot and I’ve killed Rima so many different times in random ways just because.

the guard at the gate of the final test. had to get a contract high score somehow. took a while.

Those fake gardeners in Whittleton Creek with weapons. Fucking hate them. So annoying.

You all are wrong, the NPC that was killed the most, is most certainly Luca Wood, I don’t even have to explain where he was at, yall know who am I talking about

Fair point, i can see where your coming from

Glad I’m not the only one who does that all the time lol. In fact I do that with pretty much anyone standing close to water

(I like to pretend they survive it, among all those fishermen there must be a few who can swim?)