Why is the starting point (the only starting point) for a suit only run all the way at the tower?? Why isn’t there another suit start point set at the gate where you enter the compound? (Pic below)

I’m a suit only player and this map really frustrates me because of that. If you say use the raver suit, I don’t consider that suit only. It’s not a suit I can choose. I can’t choose 47’s signature suit and gloves. I can’t choose the clown. You’re just dressed like everyone else so you’re not technically suit only.

Other than the 4 star SA rating being achieved, this is something that really makes me hate this map. Especially if I actually start at the tower, I have to run for like 45 seconds just to enter the compound and waste my time during contracts.

Please ioi, please @Travis_IOI please @Clemens_IOI please please add a gate start point where I can actually choose my starting suit and feel like a suit only run.

Anyone else agree or disagree? 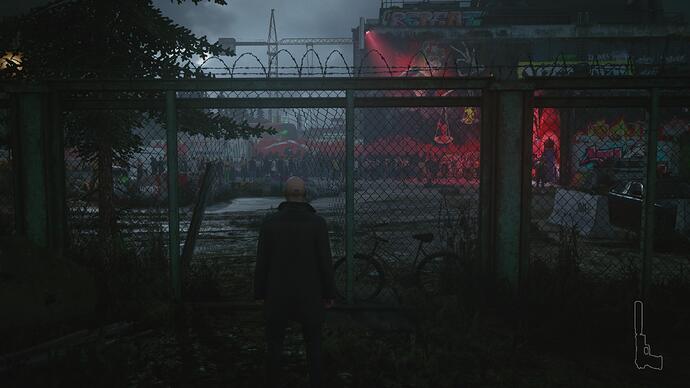 The starting point at the entrance of the club counts as suit only, too. Downside: You can’t bring a gun with you from the beginning.

I think the worst starting point in entire series is the morgue in Hokkaido. It’s more commonly used than the radio tower in Berlin. Starting there, I’ll have to wait a few seconds before stop blending in. I could now recite the dialogue.

Especially upon restarts it can be a little annoying, but I feel that the stash point, the security system and Agent Smith with the access card all being so close makes it quite useful to start at.

The Tower start is the all purpose-have fun with the level-sniping starting point, that’s why it’s a bit more remote and unlocked only at mastery level 8. It’s not really meant to be the default one, I think.

The “default skip the story intro” start is the club entrance. This entrance also allows you to still play the level “as intended” with no weapon and no briefcase, on site procurement only. Just a bit more leeway with two small items and direct entrance to the club.

It’s just the way the level is designed. Radio Tower is for the more fun runs.

I think you never played Hitman 2 Silent Assassin cause that game is filled with way more ridiculous starting points, and considering that you can’t choose another one, that makes stuff even worse. For example starting point of the first mission in Japan, Tracking Hayamoto. You start infront of two guards that move so fricking slow, and if you aren’t some pro player, the amount of waiting till those two guys turn around and you can start your move can get to around 2, 3 or even 5 minutes. Obviously tho as I mentioned before there are ways to bypass this and knock those two guys out, but if you are playing this game for the first time and know literally no crap about the game, restarting everytime and waiting for those two guards to move away just makes this so bad. So I wouldn’t call this starting location in Berlin the worst in the series. Maybe in the World of Assassination trilogy, and even so I’ve rarely used any alternative starting points, only maybe for challenges and stuff and that’s it

I’d love to start in 47’s suit at the patrol station as well.

It’s always slightly bothered me that we couldn’t do that.

Personnaly I also wish we could enter the station to obtain “improvised” tools like a screwdriver, earphones and what not. It could have been a unique twist on the usual “select your loadout” before going into the mission.

I understand why we can’t, what with the level gameplay loop, the build up of the level story, and quickly pushing the player towards the forest (I still love the way the THOR ad is a hidden arrow showing the way). Maybe if it had a shortcut who could only be opened with a hidden key.

The starting point at the entrance of the club counts as suit only, too. Downside: You can’t bring a gun with you from the beginning.

I said that. Only proves my point that this isn’t a true suit only start point.

I think the worst starting point in entire series is the morgue in Hokkaido. It’s more commonly used than the radio tower in Berlin. Starting there, I’ll have to wait a few seconds before stop blending in. I could now recite the dialogue.

It’s not even a littler bit the worst. You get to even start with a briefcase at that spot.

Just a bit more leeway with two small items and direct entrance to the club.

It’s just the way the level is designed. Radio Tower is for the more fun runs.

How is that a suit only run when I can’t even choose a gun nor the suit I want to wear?
And again, there’s contracts mode. Why do I need to run 45 seconds to the gate when a starting point can be made right there?

Also, having a starting point at the gate like in the photo allows it to be balanced. I don’t get free access into the club. So I can choose which start I want.

So I wouldn’t call this starting location in Berlin the worst in the series .

Ok. I meant trilogy. Cuz this game allows you to choose which start point you want.

If you wait for the opening cutscene to end you can get off the morgue table immediately without losing time or getting spotted.

Laundry worker entrance in Mumbai for sure.

You are fed drip by drip the narrative for this unique mission. IOI has you slowly making your way to the Rave site and you have the option also to survey the mission from the outset at the top of the tower via the Sniper nest.

This is a bit of the issue for IOI which is relates to setting up linear narrative story beats for the first go through, and the more open sandbox for the succeeding missions.

Berlin is already fairly easy to SASO without gearing up, taking it on with a pistol and a couple tools almost feels like overkill.

I’m seconding the vote for the laundry worker starting spot, there’s hardly any bonus to it, it doesn’t even really make the laundry manager stories any easier.

I think nothing beats the Hokkaido spa starting point when you dress as the white ninja.

You can’t bring a gun with you from the beginning.

So true Berlin the worst
I think they need to increase more starting location to all hitman 3 maps Dubai, Chongqing, Berlin at least

How is that a suit only run when I can’t even choose a gun nor the suit I want to wear?

I may be wrong here, but to me “suit only” just means that you only wear the non-disguise suit that 47 starts the level in. I don’t care if it’s his signature suit (and would never intentionally choose that anyway). Choosing a gun (or any other load out) has nothing to do with “suit only” in any case.

If the rave-on suit still counts as suit-only (which the game acknowledges), that it’s just being picky to say that it isn’t because it isn’t the suit that you want.

Also, it’s 31 seconds from the radio tower to the gate. I just timed it.

I agree with the OP; I absolutely hate how IOI made the starting points in some of these levels, if you’re trying to follow the story and a completionist playthrough while picking a suit of choice. You can’t do the cinematic HALO jump start in Dubai if you want to use a suit with gloves, for example, or play Berlin, or Mendoza. Berlin is the worst offender because, somehow, for some reason, it carried over into the Elusive Target there, and you could not go in with a selected suit. I hated that. Berlin had the worst starting locations and options, with Dubai, Mendoza, and Patient Zero campaign as follow-ups.