We are close to the end of April but we didn’t get roadmap for April 2022.

I am sorry if it was asked before, but is there any news/updates about this?

Simple answer: no.
There were no news or updates on April Roadmap

The only update we have is that the current roadmap is not yet ready. Thats what they posted on Twitter 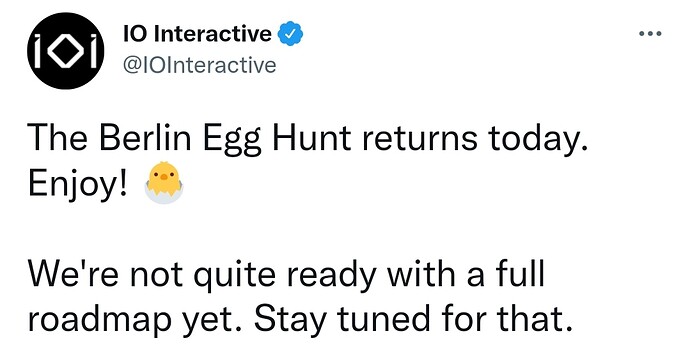 No, but there is a roadmap of some sort coming in the future. We will soon know what the current plan is in terms of future content.

This says roadmap. Not April roadmap. So since being so late, they won’t bother releasing in April. It will be a May roadmap.

I appreciated their update there, but it was kind of a non-update update… @Clemens_IOI are we staying tuned until later this week? May? Summer? 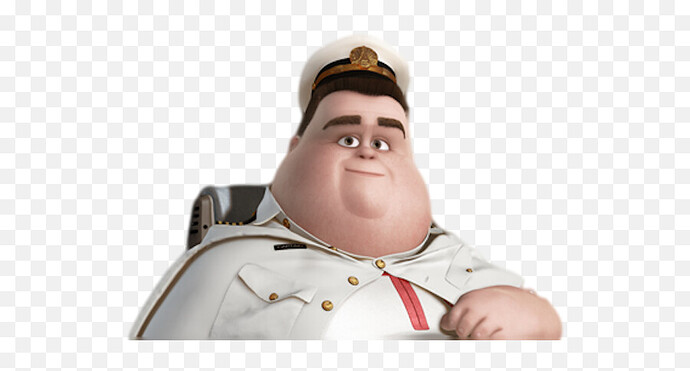 Well, good morning, everybody, and welcome to day 255,642 aboard the Axiom. As always, the weather is a balmy 72 degrees and sunny, and, uh… Oh, I see the ship’s log is showing that today is the 700th anniversary of our five year cruise. Well, I’m sure our forefathers would be proud to know that 700 years later we’d be… doing the exact same thing they were doing. So, be sure next mealtime to ask for your free sep-tua-centennial cupcake in a cup. Wow, look at that. IO Interactive will also be making an announcement later today on when we can expect the next Hitman 3 roadmap, which is said to include information on when to expect the release of Freelancer mode. Hope everyone’s excited! Uh, AUTO, um, what’s a roadmap…?

could’ve at least reactivated a legacy target or something, berlin egg hunt is fine tho, one thing I don’t understand, is their obsession with escalations in this game, solid 50% of new content is in some way an escalation

With no more than about 10% of those escalations even being fun in any way… and yeah, I’m counting 7 Deadly Sins, Dartmoor Garden Show, Berlin Egg Hunt and Orson’s Nightmare in that percentage.

I could be wrong but from memory I think monthly roadmaps stopped being a thing after the launch of the 7 Deadly Sins, which replaced the [Month] Roadmap with the Seasons of Sin.

Roadmaps are still coming to announce new content but no longer in the monthly fashion, so we could possibly get a Spring Roadmap and the sort anytime now.

Escalations are brand-new things after all, and we haven’t seen anything brand-new since the lauch of the Season of Wrath. ETA, FC and old ETs are just old things.
In fact I think we are having a lack of new contents in HITMAN3, I really miss the feast in 2019 (new things every single month in HITMAN2)
Though escalations and challenge packs are rarely very enjoyable to play, I still wish to see more of them as they are NEW (but I really doubt if there would be more…)

In fact I think we are having a lack of new contents in HITMAN3, I really miss the feast in 2019 (new things every single month in HITMAN2)

I think you’re looking back at H2 with a little bit of rose-coloured glasses since at this point in H2’s life there was no new content coming out. It was only ET reactivations and FCs after the December 2019 roadmap came to an end.

Yes, H2 had a wonderful journey in 12 months 2018~2019, full of contents every month. But the Year 1 of HITMAN3 is terrible, the only new thing is 7DS (quite unworth as I’m concerned)
and for Year2, freelancer and rocky could be great, but they are still not “monthly”, even with them I still see H3 less-attractive than H2

It was only ET reactivations and FCs after the December 2019 roadmap came to an end.

That’s what we are having now in Year2, but Year1 is awful so I kind of wish IOI could make up for it and make H3 eventually equal in new contents with H1&2. Unfortunately this seems impossible now.

Hitman 3 is the worst of the 3 seasons. Hitman 2016 was loaded with content and Elusive Targets, Hitman 2 had an amazing 12 months and amazing DLC maps. Hitman 3 DLC is very average and I don’t know about you but I need a few more escalations.