i imagine he says something like “lol suck it bozo”

He says nothing at first. I think he disarms the guy, bopps him on the head, then says something super monotone and then kills him.

A lot of what 47 says in game dialog is either an outright pun or at least a sly wink to one. “It’s To Die For”, his whole tour of the Schmidt house in Whittleton Creek, his dialog with Vanya Shah as the foreman, and many others are all clearly meant to be funny (to the players at least). He may not intentionally be cracking jokes, but his “clever” murder puns and references are all intentionally delivered that way.

47 doesnt do one liners

You might want to play H2 again, because oh yes he does.

47 has been truly serious with a target once in the recent trilogy : the confrontation with Jordan Cross. But the closest that we have for what @Heisenberg asked is the confrontation with Vidal. And yep, that’s a one liner. And let’s not forget the one time in the entire franchise when 47 made a quip for absolutely no reason. He wasn’t responding sarcastically to something someone else said, there’s no indication Diana was listening in, so it wasn’t for her benefit; 47 just up and made a joke, unprompted, for literally no reason except his own amusement. It was in Santa Fortuna, when Jorge Franco is on the edge of the waterfall and 47 taps him on the shoulder, and we get the absolute gem of: “Dr. Livingston? Excuse me…” before he pushes him off the edge. 47 was actually enjoying his work so much at that moment that he made a joke for no one’s benefit but himself. That was the most character development he ever had (or needed).

Even though hitman 2 2018 is my favorite hitman game i purposely ignore the writing, as the constant joking and see through death one liners ruin 47 for me

This suddenly hit me when I was getting dressed in the morning:

47 has been truly serious with a target once in the recent trilogy : the confrontation with Jordan Cross.

I always wondered about that. That conversation served no purpose, as 47 didn’t take any recordings of Jordan’s confession back with him to give to the clients. So why did he corner and confront Jordan like that? I see two possible reasons. Either he was just curious, and wanted to hear what Jordan had to say for himself. Or, the other option: is it possible 47 got some kind of enjoyment out of putting him on the spot like that? 47’s not sadistic, but did he take some kind of psychological satisfaction, or even pleasure, in toying with Jordan like a cat that has a mouse by the tail? It’s an interesting thing to consider.

He’d say “Get good scrub” and proceed to noscope him

as he turns for the 360 no scope, the camera will show his barcode: l33tagent420

The fact that Diana regularly comments on what 47 is doing leads me to believe that she is somehow always watching (and potentially recording) everything he does. Just because 47 didn’t record his conversation with Jordan Cross doesn’t mean it wasn’t recorded.

At least that’s how I think of it.

what if we’ve been playing diana the whole time?!

I sorta button from top down. I start at the 3rd button down and button straight down. Then if I need one or both of the top two buttoned I do those (collar would always be last). I never really realised I did it this way every time until you asked that question lol.

Will GTA VI be a good game (prediction)?

The last few weeks numerous leaks have floated around about GTA VI having a female protagonist (next to a male) and it taking place in Vice City (Miami) telling the story about a Bonny and Clyde type o’ duo. Looking at R*'s record of GTA V, Red Dead Redemption 2, The Definitive Trilogy and all the GTA Online DLC, what do you guys think GTA VI will be like?

I mean I can only say mid for no other reason than Rockstar being a still somewhat competent company even at their very worst. I literally know nothing about the game beyond the leaks and no-one on Earth knows if any of that material will even be in the game at all by the time this game comes out in whenever it does.

There are no bad GTA games.
They all share nearly one high level of quality

There are no bad GTA games. 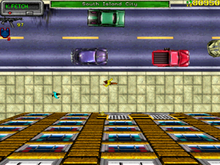 It’s a first attempt from 18th century.
I bet only one or two people here played the very first 2 GTA games.
They doesn’t count