I’ve never understood people who move on from things they were interested in.

sometimes you just move on from certain properties and franchises. Maybe because yer tastes have changed or your interested waned over the years. You still obviously like them deep down but not as much as you did as first. sometimes people just wanna experience new things without clinging to the old

Don’t confuse “moving on” from “not having room for additional material”. We hear all the time about how the sequel trilogy “ruined” Star Wars. Whether the Sequel Trilogy is good or not, it has no bearing on whether the Original Trilogy is good or not. If you like the first three released movies, why does the existence of three later movies have any impact on that?

I am currently disappointed in the trend of moving the Marvel Cinematic Universe towards “genius teenagers”. I don’t really have much interest in seeing those types of characters but I still very much enjoy the earlier entries in that series.

Often I find that a game or movie franchise that I consider great is better left as the experience I had when I first played it without any need on my part to go back and revisit it. Other times I will happily go back and replay or rewatch. I will never insist that I never liked it and then refuse to acknowledge it but I may not need any additional content in my life.

That always was confusing to me too. In any event, I haven’t ever really had anything that I loved that then added new entries that I disliked and would go back to the earlier stuff for comfort. With the notable exception of season 5 of Fear The Walking Dead. Holy jumping fucking Jesus, to call it a dumpster fire on top of a train wreck would be an insult to words. I’ve been hesitant to catch up. And when I, of all people in the world, don’t love a thing simply from its association with another thing, you know it’s bad.

I can think of a few movies or games that I disliked and then returned to earlier offerings that were better, but they are relatively few and far between. Usually it’s the first one that makes me swear off the whole thing and I’m just too stubborn to give it a second chance.

For me it depends on how much I loved the previous one. I just recently was 10,000% excited to read Heat 2 by Michael Mann. The first one (which was a film) came out 28 years ago. Didn’t matter at all. I was pumped for the sequel. I preordered and I loved it. Avatar 2… Im not so interested.

With character creation/customization and PC mod tools being pretty common in games these days, who becomes targets or victims

of your digital recreation?

Myself, if frustrated in real life i am always a tad bit happy when i can torment myself online and not in real life.

i tend to make whatever looks coolest and most appropriate to me within the game’s graphics/engine or narrative.

i do have a tendency to go for gunslinger/ninja/samurai archetypes in combat focused games because i’m a boring old weeb and middle aged man-child. i straight up made jamie foxx django and clint in rdr2, so the occasional celeb slips in.

In games with such a feature I always try to create 47 first. If a game allows me to make a bald caucasian man with blue eyes, I WILL do my whole playthrough with him (and if there is a black suit and a red tie to be found in-game, the better).

That’s the story of how 47 went to Los Santos (I made him in GTA Online with the suit, driving gloves, and a rainbow ski mask on his head), how President 47 fought the aliens in Saints Row 4, how 47 became a top capo for the Corleone family, and how Big Boss turned out to actually be a brainwashed 47 all along.

I downloaded Sonic Forces yesterday and tried to make 47 there too but it didn’t exactly work out. I wanted to make the Miami pink flamingo for my avatar but I didn’t like how it looked, so I went for Coldsteel the Hedgehog instead…

Personally not a PC player myself but I love building my own characters from the ground up.

I have some family members I would really like to see in this scenario. >:^)

Original character, for example this dude in Fallout games: 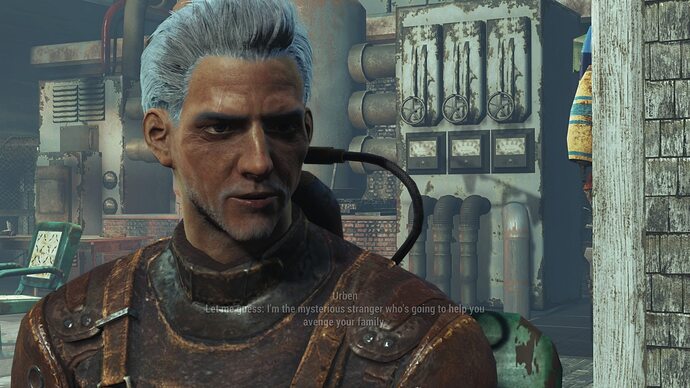 While in the souls games I’ve actually made a little family tree of Nagbottoms. though its a reverse one as i started with dark souls 3. and Elden ring is completely detached by me creating Edith Eichenburk as elden lord for my second playthrough

I’ve actually grown quite attached to my original character of Harry Nagbottoms whom i made in dark souls 3 and continued using in Elden Ring.

I’m a loser PS4 player so I don’t have any of that, but I imagine I’d create my own characters and maybe a somewhat fictional version of myself too.

Honestly it’s probably most rarely myself, if it’s a fantasy or sci-fi setting. Idk why, maybe I find that kinda boring, maybe I just can’t buy into “me” being useful in those settings.
I mostly go with what my brain thinks is cool, believable, or interested in as a “hero” at the time of starting it.

Of these, I chose targets who have a sadistic or murderous streak, and one that is deliberate, and the characters are dangerous by their own actions. For example, Reza Zaydan, although know as an adequate torturer and interrogator, seems to be more boast than brutality. Jordan Cross isn’t deliberately murderous, and is really only a danger if he can shove you in the direction of something lethal. Ezra Berg makes you feel afraid but doesn’t mean you any actual harm. And the Washington twins rely on paid muscle to do their dirty work instead of themselves. You get the idea. These target options are the ones who are truly dangerous and unhinged on their own and both with and without provocation.

Of them, I’d most fear is Wazir Kale. Runner up is Rico Delgado, who I think would be willing to torture me a little more creatively than Akka in third place, but even a ruthless cartel lord’s sadistic streak doesn’t scare me compared to what The Malestrom might do, based on his history. The guy is truly disturbed and consumed by barely controlled irrational rage at the world around him, so I definitely would want to be trapped with him, especially if he had access to anything flammable. Who knows how long he’d make it last, just to have an excuse to unleash his wrath.

Edit: Oh! You mean trapped in a Room with as their prisoner or victim. Not like a “we’re in this mess together” type of thing.

Well, I typed all that out…

Alright. In that case, either Rico or Sean.

I think Sean would win in they had a knockout fighting tournament so he’s the one I want to meet least lol.

Edit: Nope! Changed my mind after seeing @Nazareth post about how they are all just beg and cry and don’t fight back. I’ll take any of them no problem

Well, like most targets, none of them can actually protect themselves without guards so what’s there to be worried about.

wazir kale so i can kiss him