Hi ! I don’t know if this really fits here but I’m curious about the first Hitman game you have played and maybe your favourite one.

I’m not a big fan on infiltration games but this one is very particular and I instantly liked it !

And I think my favourite is the World of Assassination trilogy. I have more than 300 hours only on Hitman 3 and maybe up to 450 or even 500 on H1 or H2 and I still enjoy it to this day. The levels are amazing and the replayability is rrally good

Thanks for your answers, it’s just curiosity between Hitman fans

Technically my first Hitman game was 2016 which I got in late 2020, but I only played it for a few minutes to download the legacy pack for Hitman 2. I then played Hitman 2 a ton until Hitman 3 had its first sale, then I switched to it. This past November I finally went back to 2016 and did everything but Patient Zero and Professional Mode (which I intend to complete). This month I went back to Hitman 2 and did everything but most of the Featured Contracts and the Sniper maps (which I don’t intend to complete in Hitman 2). In Hitman 3 I have completed everything but about half the FCs, half of Himmelstein’s Mastery, and all of Hantu Port. I’m slowly but surely grinding through them all, doing a few FCs in between the Sniper Assassin sessions.

Hitman Codename 47 back in the year 2000. I first played the demo and shortly after the full game. It started my love for the series.

Mine was Hitman 2: Silent assassin, probably back in 2003 or so. After that, as i enjoyed it so much, i got Codename 47 from a friend. The rest is history.

Hitman 1, but only with cheats as a shooter, I didn’t understand it back then. Hitman 2 was the first one I tried to play fo real, then Blood money. Don’t know why I skipped Contracts. But after Blood Money, I replayed all previous ones and since then I’m IN THE GAME

Codename 47 in ~2015. Got stuck on Ochoa mission, that one time I finally killed him and planted the bomb in the lab a notorious bug occured, so I stopped trying. Tried to play H2SA, but didn’t go far. I think I got stuck on one of the Russian or Japanese missions. Then I played BM which was the first Hitman game I played the shit out of.

Over the course of the next years I played Absolution, finished C47, played Contracts and then H2SA and occasionally, H2 and H3

It had to be around 2014(?) I bought a trilogy pack for PS3. It had Hitman 2: Silent Assassin, Contracts, and Blood Money. I also bought Absolution.

All I can say is I recall trying to figure out the controls outside the wall along the road to that 1st target’s mansion. Then playing each (new) game and how the controls were different from the previous one. I played up to Blood Money, got to the Heaven & Hell party… The one target killed me after a cutscene and I gave up… Haven’t went back to it since.

Then I played Absolution. Was hooked! Played it multiple times through…

After having played H2016 and up, Absolution now feels sluggish.

H2SA, still my nostalgic favourite of the older ones. I’d played a bit of contracts but it never quite felt as alluring to me. I played the tutorial mission of BM back in the day when game demos were a thing. Years later I give Absolution a go, and spend a lot of time in it but eventually got frustrated and bored with its stealth approach.

Years later in 2017 I find Hitman 2016 and decide to try it in spite of thinking Hitman died with Abso and pretty much fall in love, spend almost 500 hours in it, getting 97% completion and playing Professional (now ‘Master’) difficulty way too much. Then after a long break from it due to losing Xbox access, I get Hitman 2 on my potato PC and learn to enjoy the S1 levels in a whole new way with the added mechanics, improvements, etc. (even though it ran at like 8 FPS). Spent 400 hours in that, and eventually upgraded to a decent laptop just in time for H3.

I’ve spent 3130 hours in H3 so far, much of it learning various different strats, recording runs and trying to pull off crazy silly stunts. I still replay H2SA from time to time and have 431 hours on Steam with that trying to master the levels. Still meaning to go back and retry the others, and I’ve been trying to learn C47 recently.

Codename 47 was my first game and even though I really, really, really liked it, it wasn’t until H2SA came out for PS2 that I really fell in love with the series. Then once I was hooked I became upset there was no briefcase in H2SA. They corrected this with Contracts though and then fast forward however many years and WOA comes out with no briefcase in the first one only to have this corrected in the sequel.

Played Absolution in 2012 when I was ~7. The only games I had played before were open world, so I tried to drive a car, unable to read a single english word. Pressed a button, the car’s alarm was raised, and the guards bulleted me into pieces

7 years after that, I went to trade my Horizon Zero Dawn disk for another game, and the store manager suggested H1 as they were the same price. Not knowing how the game actually works (escalations, challenges, unlocks) I finished it in a week and went for another trade but the guy didn’t take it back; He claimed I’d damaged the disk, although it was damaged before the initial trade and all I’d done was inserting/removing it to the console once.

I was first despising the guy for doing that, but what he did forced me to play more of the game which ultimately led to my love for the franchise.

My first Hitman game was Hitman 3 about a week after it’s release. I also got Hitman 1 and 2 Gold with it just to have every level and bit of content.

Hitman Contracts somewhere in '07. Got it as a present from my niece since she didn’t play it anymore. I guess this is where my love for the dark side of Hitman started. First time playing was in my dark attic at night. Flashing lights, dead clones and deranged hospital patients. Game left me scarred and I quit after 10 minutes. Its still one of my favorite games ever as of today.

codename 47 around a friend’s house back in 2000. i was 20 years old, i think? we used to fuck about a lot with the cheat things like slow motion and the nailgun (that last one could be h2:sa, actually). i bought it shortly after. i was on a big john woo kick at the time, so absolutely adored it. hated the jungle levels though; not really the game’s strongest point.

wasn’t long after that max payne came out. literally used to play both those games on rotation.

sweet zombie christ. that is young to be playing hitman

H2:SA when i was 8, I had the demo disc for PS2, my older brother bought the game at some point, I didn’t play it properly, just shooting everyone, I remember being amazed by the disguising and it reminded me of the PS1 Mission Impossible game. My brother sold it a week later

then i got Contracts in 2004 and it was actually mine!

I must know which one @MrOchoa played first! He never talks about!

I’m sure I played Codename 47 back when it first came out (I’ve played all of them). Life was a lot different back then though. Hard to remember!

I’ve played Codename 47 over at my friends house, his older brother got the game in the short window it was available before being banned in Germany.
He burned me a copy of it on a CD and gave it to me. When Silent Assassin came out he bought me the game from my money and I’ve got Hitman Contracts for my birthday when it came out.

Years later he sold me his original copy of Codename 47 which I display in my living room.: 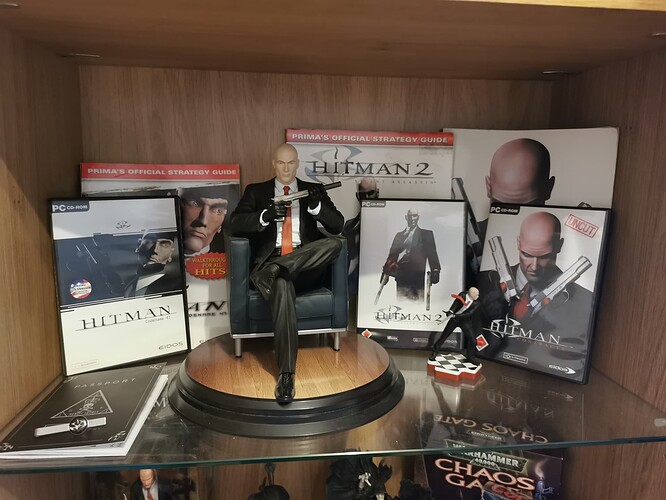 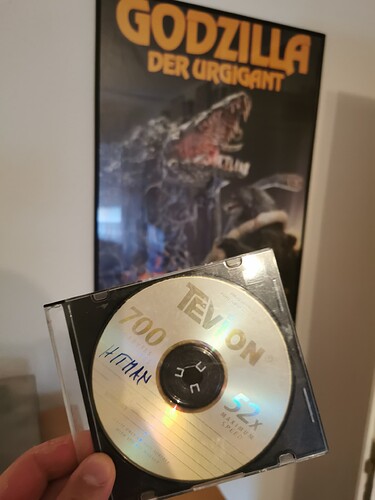 It’s for Archive purposes ONLY! I Swear!

I feel like a newbie compared to you all
I never played C47, H2SA or Contracts (yeah shame on me