What I understand you should be able to replay elusive targets in arcade even if you failed before. But it just stands this arcade contract cant be access because you have previously farled the contract

The first place you may want to check is the Known Issues thread:
https://www.hitmanforum.com/t/hitman-3-known-issues/2965/2

You mean you even never launched Arcade before and it still says you can’t play?
That’s odd. I suggest you to storm IOI Support at ioisupport.zendesk.com

You might have failed that one just now within Arcade mode and now you’ll be able to retry in 12 hours.
Have you played this grayed one and failed it within Arcade?

I have never tried the arcade.
But I did failed 1 or 2 elusive targets couple a weeks ago. But whene the arcade did not exist

Ok, what does countdown says? How much time left?
But either way, in Arcade you should be able to play ETs as much times as you want even if you failed.
I don’t know why it’s grayed out for you but I suggest first to wait till time runs out and see if you able to play it. If not, knock to Support. If yes, you just got unlucky for some reason

Kinda weird now the country is gone. Could be a glitch or something

Could be, yes.
As the mode is completely new, it might being tweaked in hot pursuit 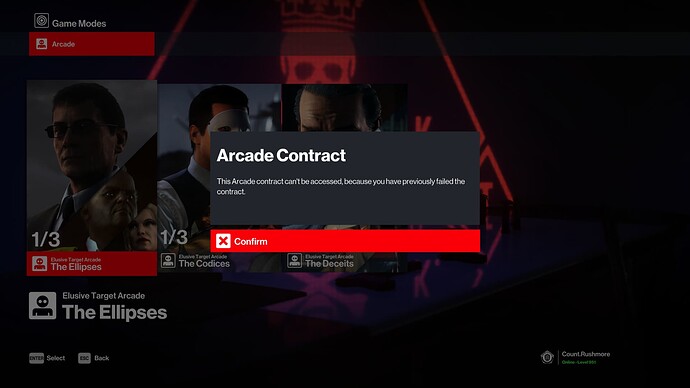 Though it’s my first time launching the game after the update and I succeed in every single ET so far.
What’s going on @Travis_IOI @Clemens_IOI ?

I have completed first contract of the first arcade (the priest in Sapienza, whatever he is called) and now The Deceits and The Ellipses are not playable for me.

another failed lunch of update and. I keep paying for DLC packs and add-ons just not fair! IOI emergency fix please

Seems I found a workaround, or it’s fixed or whatever.
When it gives that message, go back to previous menu, enter Arcade again and start the contract again.
Launches for me

Update: I can actually open the deceits level 2 if I do it from a featured screen. But not from game modes → arcade screen

Nice workaround it’s somewhat working… but only one of them all others still marked fails… That’s what happen when IOI just trying to keep block existing content from the players!!! Just free the content we paid for and let us have fun no clock and no drama no permanent failures… Reply when and if we want that’s it! We not all expert we buy this to have fun

I saw the one with ‘The Prince’ and wanted to do that one first. I started selecting a loudout, then it took me back to the main menu. Upon trying to get back to it - it said I “failed”. Me thinks you’re a liar, game!

I have a countdown on screen with failed listed below, it seems it’s defaulted everyone to of supposedly failed the 1st and 3rd escalations (I’m not going to say arcade contracts, they are escalations) Well at least in 11 hours we’ll be able to play the other 66% of the new content. I’m not usually this cynical but after seeing we are getting the heartbreaker a second time, I’m just tired, it feels like we are getting the same content over and over although maybe this time it will have an auto fail objective or something, because those are always fun!

Even if you finishen one it can say failed. Why dont make it like another escalation so we can have fun. Just crap

Will not play the arcade until they fix it