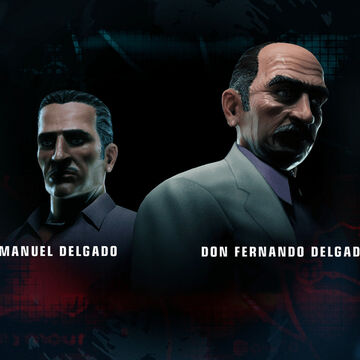 WoA-style discussion thread for AVY. Share your thoughts and discoveries about this level.

Your next target’s in Chile. His name is Fernando Delgado. Used to be a Colonel in Pinochet’s intelligence service; now he’s running a cocaine factory under cover of a vineyard. Satellite imaging suggests that the lab is underground.

Fernando’s son Manuel is in on the coke trade, so to make it look like a drug hit, you’ll need to take him out too. We’ll get you in with a pensioner’s club from Santiago for the big celebrity unveiling of Delgado’s new wine label, named for 80s “B” action star Rex Stanton.

There’ll be at least one T.V. crew on hand, so keep an eye on them and their cameras.

Delgado’s got a seaplane, and that may be your best way to get out in a pinch.

This might be a bit far-fetched but I am pretty sure the targets in this mission are related to the “Rico” guy from “Three-Headed Serpent”, Just a hunch though.

You are joking, right? The references to him are everywhere, Rico even talks about Don Fernando to Grey on the Phone, has his instrument and Wine in his Museum etc…Its his Uncle and the other Targets of Three Headed Serpent are also related to Don Fernando, Andrea Martinez is his adopted Niece and Jorge was during AVY in Fernandos Cocaine Factory.

Jorge was during AVY in Fernandos Cocaine Factory.

Jokes aside can you actually meet Jorge Franco in A Vintage Year?

To be honest, first I saw this name of a thread, I thought it was something like a side-campaign for HITMAN 3 released.
Maybe the name needs to be changed, not to be “HITMAN 3 style”?

Why would you think this topic is about a side campaign when the category is classic Hitman games-Hitman Blood Money?

Yeah, the title stands out more than the category, as it should. But there’s nothing wrong with the title atm, following the same format as other mission discussion threads is a good habit

Anyways talking about the actual mission, I always disliked this one. Don was a fun and iconic target but I didn’t like Manuel both as a character and as a target. The whole underground area just didn’t click for me

Anyways talking about the actual mission, I always disliked this one.

Good to know I am not the only one.
I cannot say I really dislike the mission,but it’s a bit meh for me.I like Don as a target and the guard disguises look cool,but the other aspects aren’t that good.
•I find the soundtrack pretty forgettable in general(sure,listening to Don playing the violin or the music in the cellar are cool,but the rest…)
•Infiltartion feels pretty boring and easy in this mission(There is only one guard to worry about in the wine cellar,but as long as you don’t run too early and as long as you’re not spotted entering the cellar by a patrolling guard,Manuel feels like a free kill.For the mansion there is an easy wall to climb and from then on it is the same situation as the wine cellar).
•Manuel’s route is pretty boring(He cannot be killed in any way in the public area and it takes him ages to get inside the drug lab)
•What’s the logic behind the exit?

•The drug lab isn’t very interesting.
I really don’t understand why so many people love this mission.It is overrated…

Damn, this was always one I really liked. It’s not exactly a top 5 missions in Blood Money but it is my favourite non-American Blood Money mission in the game.

I like the map layout, the atmosphere, I like the targets and the unique exit. Usually these missions have you start and end in the same place but I like that they’re so far apart here. You start in a civilian area and have to leave by going through a trespassing area. It always stood out for me and in a good way.

It isn’t a great map but until HITMAN 2 it was our only South American representation that I enjoyed re-visiting. Sorry @MrOchoa

I find the soundtrack pretty forgettable in general(sure,listening to Don playing the violin or the music in the cellar are cool,but the rest…)

Any time I play The Final Test and hear the birds singing, I immediately think of Vintage Year

The soundtrack is less epic and tremendous than other BM tracks, but imho it’s the point and creates a contrast between this mission in Chilean countryside and the urbanistic US levels.

Infiltartion feels pretty boring and easy in this mission

This is the first actual level and it’s the part of the charm. Besides, there are a lot of more challenging ways.

What’s the logic behind the exit?

It would have been cool if you could do something in the lab other than blow propane tanks up. Like poison some of the „product“ so that when Manuel and Rex’s Manager go down there he would try it and die. Otherwise it’s a boring fiber wire kill or dropping barrels. I like the home invasion aspect when you get inside the villa but otherwise it’s pretty boring.

And what is even the point of Rex being there?

Theres no NPC that is definitely him, but his bio in Three Headed Serpent says he was there on that day.

Theres a Dude with a Ponytail in the Basement with the Workers. I almost imagined it would be him.

But isnt that Rex Stanton?

I always thought Rex Stanton would be the Guy in the Entrance Area, who wears a Dark Blue Suit and looks a bit like Hendrik Schmutz.

You are possibly correct, i haven’t played BM for a while so its a bit blurry

I always thought Rex Stanton would be the Guy in the Entrance Area, who wears a Dark Blue Suit and looks a bit like Hendrik Schmutz.

The blonde guy in the suit is Stanton. The ponytail guy in the shirt that goes on the tour is his manager.

It would have been cool if you could do something in the lab other than blow propane tanks up. Like poison some of the „product“ so that when Manuel and Rex’s Manager go down there he would try it and die.

Manuel sniffs a line in the room near the staircase, but it´s not possible to poison it iirc right?

Manuel sniffs a line in the room near the staircase, but it´s not possible to poison it iirc right?

I remember doing that but last time I’ve played it it didn’t work. Maybe its the Mandela Effect, idk

I have the same problem actually. My initial response was “yes you can”, but then I had to check, and apparently not… And thinking about it, I think I always had to kill him “directly” in that room. I think it might be the Mandela Effect, caused by WoA´s option to poison pretty much anything

Edit: Oh wait, apparently you can (it´s been so long since my last playthrough that I honestly can´t remember)

We have a very special mission ahead of us. We need to take out Don Delgado and Manuel Delgado at their wine tasting party. I'll tell you how to get a guard uniform and easy access to the party and I'll also cover the easiest ways to kill Maneul...