Years ago, I saw a concept art of Richard Ekwensi and one of his bodyguards (black men in black suits with FMG 9 guns) on some gaming news website. It looked to be a drawing by Simon Lindwall, but I’m not sure.

Does anybody have this lost piece of art? Do you know where I could find it? I’ve checked Artstation already.

You could probably find that in this topic…

NEW: The Classics Collection Hello everyone! The last few months I have been digging through tons of archived sites, videos and reverse image searches in search of one thing. Concept art. I am obsessed with concept art, and I believe more people should see the early drafts of what inspired their favorite games and levels. I would like to do some explaining as to everything that went into this, some decisions made and more but I will save that for a reply when this is posted. This is a threa…

as well as others. Welcome to the forum!

Edit: nothing seems to come up via searching for text, but there could still be pics.

Not that it helps you in anyway, but I figure the concept art was from back when he was the original target in the Bangkok mission. Can’t remember where this was confirmed though.

Although it might be worth scrolling through the Things About Hitman You Just Found Out thread maybe? This seems like the sort of tidbit that would be in there somewhere that might be accompanied with any art the post could find?

I don’t remember seeing this at all

pretty much every character concept arts I have are from GFactory or Simon Lindwall and I never got to see one with Richard Ekwensi (though I do know some GFactory concepts aren’t even on their website, and some of them are just randomly found)

when he was the original target in the Bangkok mission.

However, this was from Travis on the official Discord server:

About that Lighter gun - it was part of the very first prototype for creating a ‘core hitman’ experience back in the day. Basically it was an homage to the replica gun swap in Curtains Down; you could ‘help’ out the target, who so happened to be Richard Ekwensi (later a Bangkok Elusive) with getting his replica gun lighter to work - but if you’d swapped it with a real gun, he’d shoot himself in the head.

I’m sure that on the Ekwensi live stream back in the day we mentioned that he was the original target, meaning the first one properly used in internal playtests.

I had no clue he was the original target. That would explain why his ET has two people (probably the fortress and the roamer, originally)

It’s a pretty nice ET, though broken as of now, I wonder if we can find the livestream where they talk about that

Simon Lindwall updated his Artstation with even more concept arts, including one with Ekwensi, no sign of bodyguards though 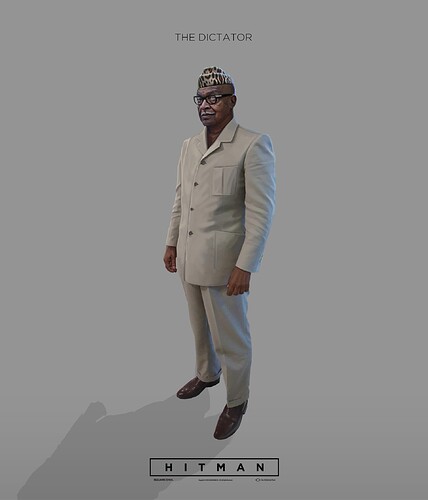