Your target is Pertti Järnefelt, bookkeeper to the global underworld and considered to be a criminal myth by law enforcement agencies the world over. In truth, the target has led an unassuming yet comfortable life managing the finances of kleptocracies, terrorists and tyrants for decades.

The client, Locksley, has assembled information on the target’s movements and conclusively linked him to the shadow client’s operations in Colorado. This makes his elimination a priority. The client has also requested that you retrieve the target’s ledger.

Note that the target is extremely paranoid and will attempt to flee at the first sign of overt danger. Plan accordingly.

Järnefelt is bookkeeper to the global underworld, an expert at managing finances and transferring money without drawing the attention of law enforcement. As such, he has become the premier facilitator for terrorists and criminal organizations alike.

He is considered to be a criminal myth by law enforcement agencies the world over, which maybe because he enjoys a measure of extra-legal protection. Given his meticulous attention to detail, this anonymity may also be due to his careful nature and the simple fact that he has never been caught with his hand in the proverbial cookie jar.

ICA files show him fleeing within hours or even minutes ahead of raids, a fact which lends credence to possible connections within global law enforcement. The target has lead an unassuming yet comfortable life managing the finances of kleptocracies, terrorists and tyrants for decades (such as Karnac Holdings owned by Ekwensi and Caracas Trading owned by Delgado), at least since the late '60s. Files retrieved from Russia in the mid-'80s indicate that he may have been a part of the volunteer SS Wiking Brigade during the Second World War, but this link is inconclusive. 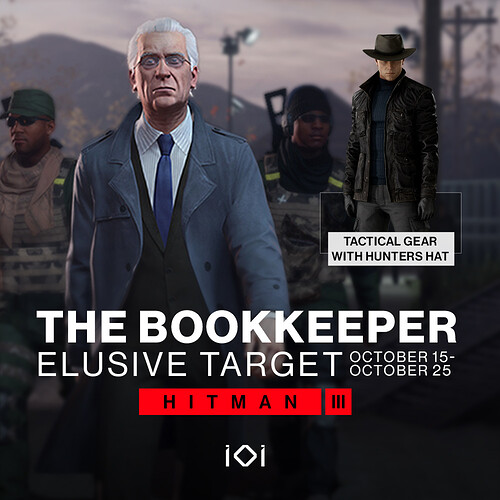 Remember this one being a particularly nerve-testing experience in H1, because he was towards the back end of the 13 (of 26) ETs that you could earn the Winter Suit for by getting 5 SA rankings during HITMAN ETs, and despite amassing a nice 7/13 SA rankings with the first 13 Elusive Targets of H1 (which didn’t count, because the 5 SA Challenge/Winter Suit unlockable hadn’t been announced/created until the first 13 ETs were already done), I still needed an SA ranking on The Bookkeeper to get my Winter Suit and at that point I knew there were only a couple of upcoming ETs left to do it in. And of course, being an OG member of #TeamNoRestarts meant that the margin for error was getting smaller all the time as the H1 ETs started to come to an end.

Remember going with a very carefully placed (just outside the wooden fence gate of the main farmhouse building) standard H1 fire extinguisher/breaching charge combo, and being really, really scared that the blast would also take out one of his 4x patrolling bodyguards at the time. Got my SA though, and either got my Winter Suit with that or put myself in a position where I only needed one more SA ranking to get it, so have fond memories of this one. Plus there was that absolutely AWESOME video of @Kotti playing this one and getting into a mass shootout which he survived (never an easy task in Colorado!) which is well worth a watch for anyone who hasn’t seen it.

I’m gonna have to use my thinking cap for this one, ‘cause I want to somehow isolate him and then take him out with the map’s conveniently provided lethal syringe.

I want that Hunter’s Hat.

See the Kotti playthrough I linked above for info.

I dont like cheesing ets, but by god pertti and his 4 boyfriends will make it impossible for me to try something risky. So ill do something safe and sound. The fart case or sieker most likely.

We are contract killers; there is no cheesing. Our priority is the target, the contract. Any and all means can be utilized, so long as the end result is perfect success. To borrow half a catchphrase from a rival franchise: everything is permitted.

I say after having made a big deal about what I will and will not allow myself to do regarding the Ascensionist.

looking forward to face him again

good luck for new players hopefully you get suits back

I wonder how easy we could make this ET with the ICA Remote Micro Taser. The target walks into a couple of puddles if I remember correctly.

Colorado doesn’t have any car battery and tasers were only unlocks in Hitman 2 and III, so electrocution was not possible in 2016/2017 during his only activations, but now with all our equipements…

4 years ago (!), I was able to take out The Bookkeeper using Sean Rose’s explosive watch, it took out about 9 people and was pretty rewarding! Everyone used the ducky bomb on the car he walks by back in 2016. I expect no different this time tbh

Colorado doesn’t have any car battery and tasers were only unlocks in Hitman 2 and III, so electrocution was not possible in 2016/2017 during his only activations,

The Big One was our scuffed option for portable electrocutions in H2016, I still don’t know whether that was a bug or not.

I will try my best to get SA on this ET this time. Time to finnish this.

Never played this one before. But I kind of like Colorado and know a lot of ways to do some kills here. Might try a no loadout run on this target…

Good Luck with trying to get Silent Assasin rating

I’m gonna have to use my thinking cap for this one, ‘cause I want to somehow isolate him and then take him out with the map’s conveniently provided lethal syringe

With 16 hours left until the ET goes live, yes you guessed it. It’s that time again where I ask if you’ve planned on a specfic method? Will you go with the car explosion (I assume most will go with it), will you switch it up to do a risky kill or will you go for a point blank kill?

I know I’m going to struggle a bit with finding a way to isolate him for my method, but it won’t be as difficult to isolate him as it is with an ET like Stowaway.

It’s of course also that time to share cool fanart of the ET:
By @Khakiasp 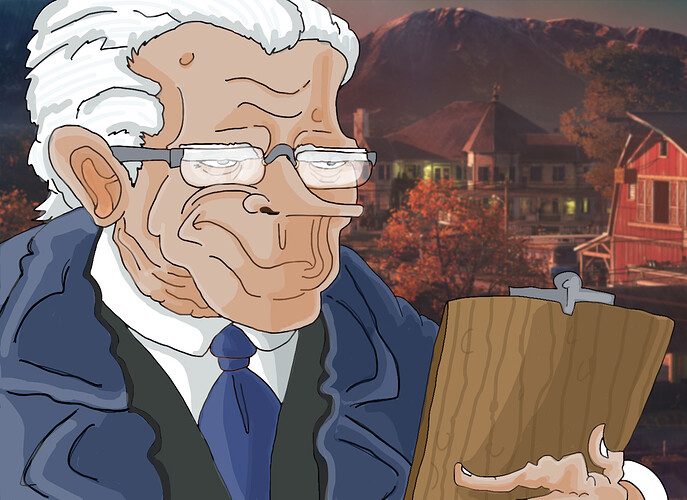 Yeah, I’m either gonna have to use the Remote Control Emetic Device or Sieker to get him to go puke somewhere and then stick him with the map’s Lethal Poison Syringe, or just leave a coin on the floor of the house entrance and drop the chandelier on him. Really have no patience with this guy for anything else.

The sole deviation that I’m currently willing to make from these methods is if I use an emetic poison on him and he goes to the slurry pit. If that happens, fuck it, I’m pushing the old Third Reich bastard in. Fitting end.

Reminder that you can destroy his car so that he can’t escape.