I was hoping for the surgeons but this is not bad either. 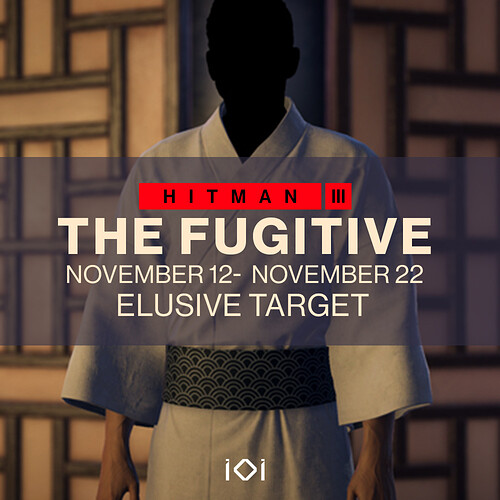 Don’t forget the Golden Method to identify the target defintetly: try to hide them in a container or closet and if the prompt doesn’t allows it, then you are green to take them out.

From the way they talked about the mission in the roadmap, could they have added a “no mistake and killing the wrong patient” insta-fail objective ?
Because there is a way to cheese the target if not.

Or do you think it was for the dramatic flair (and everyone in #TeamNoRestart) ?

Doubt they would to add that, be too unforgiving and think they learnt their mistakes from the Marrakesh ET with an insta-fail to it.

I’m actually glad it’s this one even though we had it in HITMAN 2. I failed it back then so I can get my revenge (and obtain the yukata) now, no tasers in the spa this time.

This is also a much better ET than The Surgeons.

YES!!! I wanted this one! I already know my strategy, and I already know it works, so this guy is screwed. The most complicated thing I’m gonna have to do is restart a few times until the target is the rhinoplasty patient and he’s in the spa area.

Don’t forget the Golden Method to identify the target defintetly: try to hide them in a container or closet and if the prompt doesn’t allows it, then you are green to take them out. With 17 hours left until The Fugitive is live, it’s that time again where I ask if you’ve thought about a method for the ET.
As this is the third time for many of us, will you go for something risky and cool or will you play it safe?

And as always, we end it with sick drawing:
From @Khakiasp 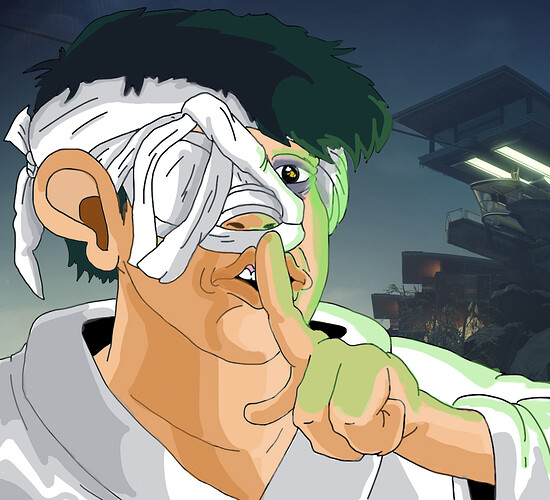 I’m gonna try to do it suit only in the signature suit with gloves, but I’m ok with knocking out the bodyguard in the morgue near the security system and using his suit if I need to. With the Sieker in the bathroom hidden stash to be reclaimed along the way, I’m gonna try to get the access card locked in the lockbox in the main security room, get the wrench from the other lockbox in the basement area, collecting every coin I can in this whole process, sneak to the director’s office and get the intel on the target (this is the part where I might need the bodyguard suit), and I’ll keep restarting from here until it’s the guy who got the nose job and he’s around the spa area, because that’s the arrangement I want.

Once confirmed, I’ll take the keycard in the director’s office and then get the main access chip from Smith (if the Smith option is not available for this ET, the bodyguard suit is going to be a mandatory step for the set-up, but I’ll be able to reclaim my suit for the execution). I’ll then access the back room behind the spa where I will crank the heat up and get everyone out of the spa.

I’ll lay two coins on the ledge where the yoga lessons are given, wait for the ET to walk to the spa, throw a coin to lure him out, use the Sieker on his bodyguard, close all the doors, throw the coin again to lure him to the ledge, where he’ll pick the coins up that were left there. Then, when he turns around, I’ll whip out the Silverballer and put two rounds in his chest and let him fall back into the hot spring far below (may have to do some restarting and repeating until this happens properly). Then, I promptly get the hell out of Dodge and head to the main extraction point. Contract completed.

I’ve been tinkering with this one in my head all year, waiting for exactly the time when this asshole is activated, and I’m ready for him!

Method will depend on the target, but I know the general route for the first part of the run.
I started playing only in late 2019 so that would be my first run with this target, so to ensure the suit unlock I don’t think I will go too crazy on the elimination method.

A bandaged target demands a bandaged face, so I will be :

(I rediscovered how open the hospital wing becomes with his disguise, with no enforcers, at first it was in preparation for the Surgeons, but I will improvise for the Fugitive and to access the record)

Time to incinerate that fuck

good luck to anyone out there tomorrow for this et

The White Yukata is my most desired suit unlock, so hopefully all goes well tomorrow!

First time since WoA began that I might miss an ET - have had to go away last minute. At least I completed it in H2 so I’ll have the challenges so it won’t affect my 100% completion quest.

The sixteenth one of my 'SASO No KO No Emetics Fiber Wire* on Elusive Targets series. Focused on one patient for about 8 restarts.

Another one down and done 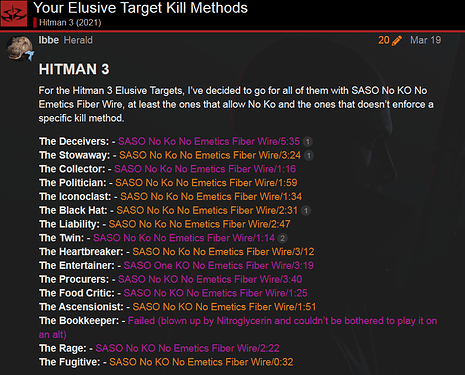