I believe the order I did was: Sheik, Sato, Helmut, Dalia, Viktor.

I’ve enjoyed the past couple of months for the community Featured Contracts. Though I’m still working on this past week’s (Cake was very good). The Berlin Sponsored Contracts were very good, definitely the best ones done for those.

Man, I had to do that contract 3 times (excluding all the failed attempts over a 3 hour window). The first I got exactly 3:00, but it was about the threshold for the time bonus, so 4 stars. The second time I didn’t have the Fibre Wire equipped (D’OH!!). The third time was the charm.

Fortunately, I did capture a clip with the Xbox capture function. The first 15 seconds is cut where I used the Seiker and threw the Remote Taser. It should give you an idea.

I have also include a YouTube video from Execution Gaming, I find he has some excellent videos. Just tried and beat Exchange of Professions. Thanks for that, @Urben!

Glad you had fun!

Never again! On H2 I finished every FC with a 5-star-rating SA. On my way for 100% completion in H3 (yes, I count FC to this) I’m doing them again. I have no idea how I ever did “Fall Season Preview” back then. Was testing and playing this contract now for over a week.
Today was the day. I finished this cursed contract! 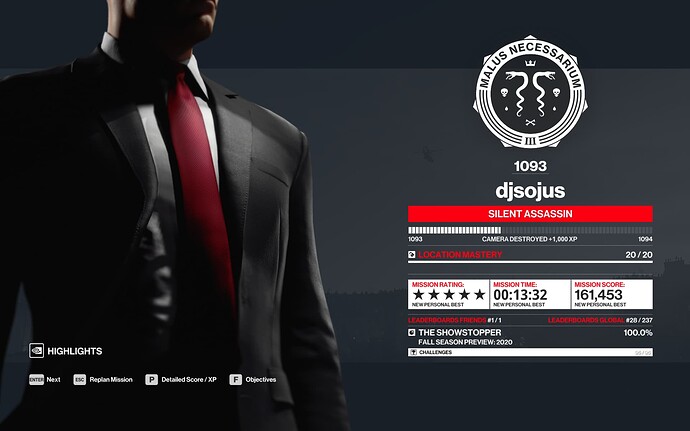 I don’t even count VP as a FC. what a pile of shit.

Fall Season is easy and less infuriating than that “contract.”

Speaking of FC: Did a few more today. And “Hitman Returns” has to be one of the most fun contract in there. So many possibilities and routes. Really liked this one. Check it out if you haven’t played this recently. (btw: I would love to see this 37 second run that’s no. 1 at the moment)

Does that involve the Bat Shruiken?

I believe that is the one. And I thought it was titled Hatman Returns.

Yep, that’s the one. I really liked it.

While replaying some old FC I found out that the Sapper’s Axe in Bangkok could be stored inside a briefcase. Of course I played it without a briefcase at first… But was this always like that?

Yes, it was the same in H2, and pretty useful for Redrum Ritual indeed. It’s also possible to hide in a briefcase the one at the top of Sgàil.

Okay but from where did you snipe the body? Because I couldn’t get an angle from top of the tower. Anyway I restarted it multiple times and finally got the body to fall off the roof and got the top spot on the leaderboard, so it was worth it in the end

Oh, I remember how some really creative players managed to get Abiatti really fast to talk to the priest by distracting every one he talks to on his way to the church. That was fun!

That’s how I achieved the no 1 spot 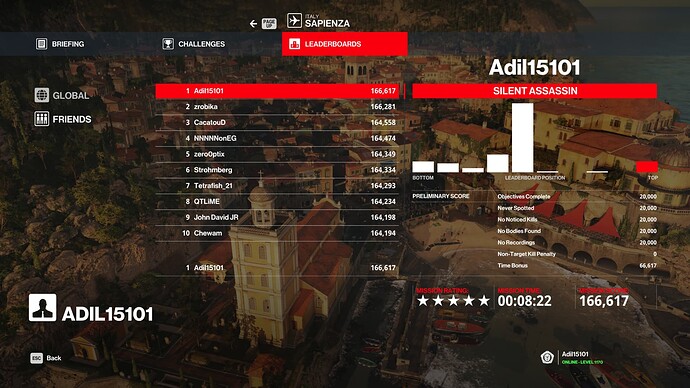 Thanks. This actually took me a day or two lol. For some reason I just didn’t want to give up. Worth it in the end.

but hey as long you hit no 1 pal thats good