https://www.dropbox.com/s/u16b3kkg6us3zlc/H2DisguiseNPC.rar?dl=1
Here you go, IDK where I found this version, but it works with Hitman 3. Just put the two files in the retail folder and it works just like in Hitman 2.

Well, at least I don’t have to struggle with it anymore.

Also I followed the H2 instructions and put the two files into the HITMAN3 folder (where you can only find Launcher.exe), and not into the Retail folder (where pretty much everything else is). That might’ve been the problem.

and what happens? Just put these files that belong to HITMAN 2 in a folder in HITMAN3 where the game launcher is located

Good timing: the poisonous item pack was updated right now to include mechanically new poisonous gas flasks! Only on itch for now, as nexus is having ban issues again: 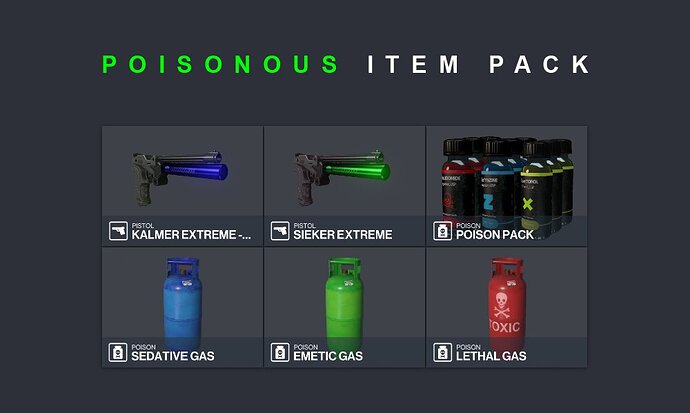 Changes from Version 1.2: Added gas flasks with completely custom mechanics, see below Requires at least version 1.4 of the mod framework The new Gas Flasks Minor spoilers ahead. Do not read this sect...

The new mod framework 1.4 permits substantially easier editing of TEMP/TBLU files with its new entity.json file format if you want to check the internals out. I also released a modder tool to go along with it, download that too if you’re interested in mod creation.

To answer your actual question: it is the AmmoImpactEffect specified in the referenced AmmoConfig. That template applies the correct death effect, besides other things like emitting particles and attaching the visible dart to the character. The framework should provide all tools needed to replace that in a collision-free way, if you want to edit it for a different effect.

Maybe a dance-inducing dart gun would be a fun joke item, if somebody wants to make a joke item pack?

There is only one thing really that I would like to add to this game and that is an increase in dmg taken from gunshots. I really want to be forced to avoid shootouts at all times. Being able to take one bullet or two at most from a pistol seems fair enough and would really enhance the tension when you have to fight.
If somone know of a mod that tweaks the dmg this way or could make such a mod I would very much appreciate it.
Is it possible to tweak player and npc health values and similiar stuff in some txt file?

Introduction Welcome to QuickEdit, a fully featured mod editor for Hitman 2 and 3! You can adjust the properties of items and some of the game’s AI, and make any mission you like with the powerful yet simple Flow editor. Export your mod in H2Mod/H3Mod format (usable with QuickMod), an RPKG file for manual installation or JSON for advanced users. You can add targets with names and choose whether they should be hidden in Instinct as well as a few other attributes, or you can choose the more adv…

Where should I extract the new update?
It seems like its a full version so I extracted it to a new folder and ran the quickedit from there but I cant see any damage multiplier to choose from the list i AI/Gameplay.

Just released a new version that fixes them in the menu.

I support the idea. but I think it already exists. The maximum and fast damage can be taken from the cheat trainer. There are such functions as: kill with one bullet, high rate of fire. I give the modders an idea where pistols will shoot explosions, poison, items, etc. That would be fun. rate of fire … ooo it’s fantastic)))

Very cool. I like your approach for the framework. I was doing something similar when I was trying to get a framework for Gundam Cross Rays built out - python that de/compiles to JSON and merges content packs together since the game itself doesn’t support modding.

Edit: BTW, do you have github your working on?

I was having trouble getting the new poison items to show up. There would be placeholder items with the names of one the constants from the modding files and no images. Once in mission, the guns wouldn’t show up. I thought it might have been because I had fiddling around with this right about the time you were uploading the new files and there was a version mismatch, but nope, still didn’t work.

I was fiddling around with the graphic settings and I changed the textures from medium back to high and suddenly, the items showed up and worked properly.

The pack of vials had the same issue in loadout but worked in game presumably because the actual vials were just one of the already existing assets.

Once i have some more time, i’m definitely going to play around and see what AI behaviors can be triggered. I think a “relaxant” that simply removes enforcer status would be balanced & useful. Triggering the “i just woke up naked” panic run might be a fun one too but probably not as balanced.

Are you using any other mods? I can switch to any graphic settings and the items work fine. Loadout images also do not have level of detail at all, so a mod conflict is more likely. Try to move other mods to patch levels below 100. If that does not work, remove them.

No plans for github, but you can get the whole source just by downloading the pack and play with it.

Don’t know if this has been seen or not, but I found the younger Erich Soders’ temp (the photo of him in the brown coat and red scarf). Funnily enough, it was stored in Mumbai’s data, and works fully as a player model, despite never making an appearance in game.
007E5A6C2FF6FB03.TEMP 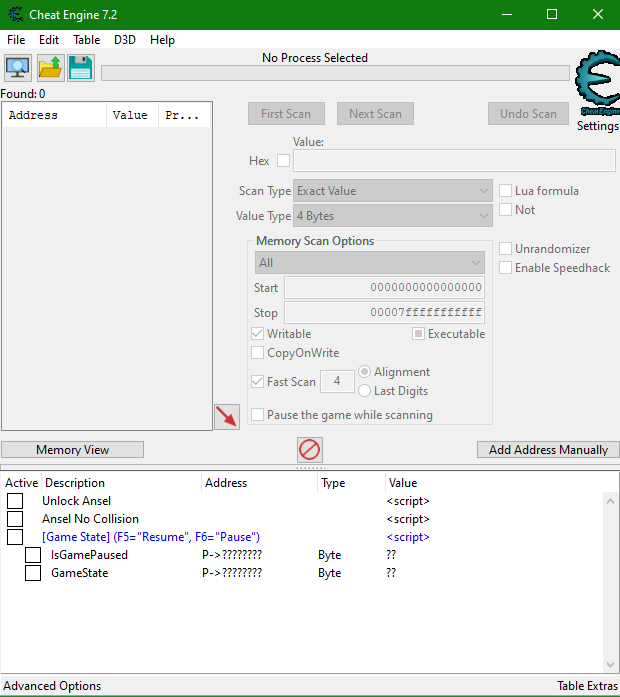 I have this cheat table that I use for H2 and I was wondering if you guys know where I can find one that will work with H3. Thanks

There was one for V3.10, but that’s obviously out of date by now:

It may work, but I doubt it.

Can you provide screenshots of Soders please? Very curious about this.

Yeah, that’s the one I was using originally but then I had to update the game and it stopped working. Thanks, though

Thank you, but it looks like it doesn’t include ‘no collision’ and the ability to unpause the game while using Ansel.

Doesn’t that not work any more, because every time the game is updated it needs a different offset?

UPDATE: Oh wow, it does work. I wonder why PascalTheAnalyst’s reddit thread required us to wait for him to give us a new offset after each update…

Because you basically search the offset yourself with the method solder linked to.