How they are shooting on him?
In my mod when you play sniper maps you can just hang around but the npc cant see you
Its a new mod or something?

I’m making my own, it will be proper sandbox

It will be available to play this mod in the future?

No, it’s for my personal enjoyment only. When it’s done I will play it for about 15 minutes then delete it.

You may have heard of The Brothers - Renzo and Orlando Caruso - a cut Elusive Target from Season 1 set at night time Marrakesh. A mod restores them in Hitman 2, and one briefly did in H3 before IO went out of their way to make it hard to restore.

Well, for the first time on Nexus and SMF since IO put this content on their deletion lists, they’re back! And they’re better than ever! 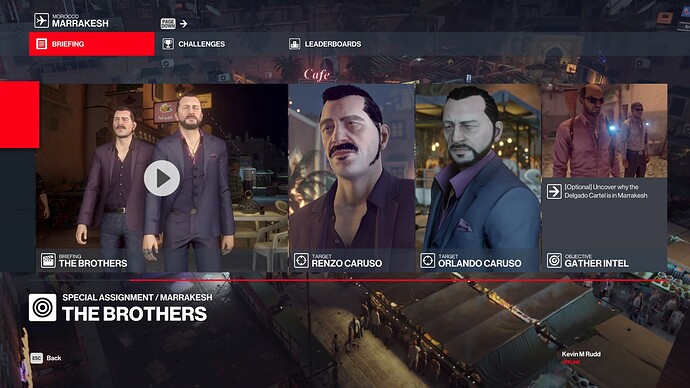 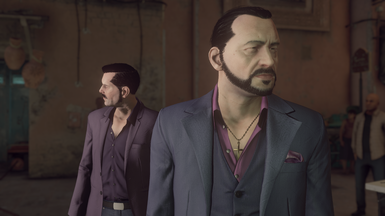 Restores and enhances the cut ET from Season 1 'The Brothers'. Playable in Hitman 3 offline and in Peacock. Improves upon previous restorations of this ET.

Play in offline mode or Peacock (ET Screen version does not have the improved contract features such as optional objective, but a plugin is now out for the “Special Assignment” to show on Marrakesh screen)

Open to hearing suggestions/complaints, but tbh hoping to move on from this mod, was just meant to be a quick thing

Thank you so much for this. They really deserved better. Can’t you get into trouble for this? Since you are relasing unused and meant to be deleted content?

Hm, simple as that… (courtesy of AnthonyF) 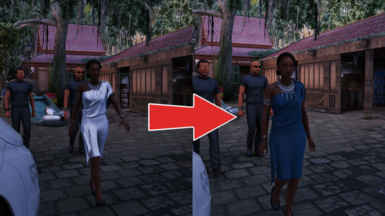 Returns colour to Inez Ekwensi's dress in The Ex-Dictator.

It’s not paid content and it’s been ‘released’ via mods a couple times now, so I see it in the same vein as all those mods that let you play with unused items/suits which may or may not have gone on to be released. Not to mention I’ve changed it to give it my own twist

I wonder what it is, seems to be making some sort of sound. Gonna open it now

Funilly enough, there are several oddities in ET’s compared to previous ones:

Does your mod collide with unfunnygoober’s Elusive Targets mod? I used both at once, the definitive edition wasn’t in the Marrakesh tab and the unfunnygoober version suddenly didn’t just say “missing content”.

I honestly don´t even remember with Nne Obara´s sweater, but it´s an odd change… Wonder what she´s gonna look like when/if they release her in S3.

As for the Bookkeeper´s and Akenawa´s glasses, I never noticed that either (hadn´t played the Surgeons prior to S3). Either way, all three are rather weird changes and I wonder why they got implemented…

I haven’t actually ever grabbed that mod to test it. But mine won’t show in his menu, and his will suddenly be playable (It will have my map changes but not my contract changes like difficulty, VR and secondary objectives). My contract should still be visible on the Marrakesh screen I’m hoping? You should be able to tell by the secondary objective being there.

If our contracts both have the same ID then you might be able to get mine to show in his menu by loading my mod after his is loaded, in SMF

I wish IO would clue us in on whether they actually have any plans on introducing the Twins in some form into the game or not… They were included in the Chongqing data core cutscene, which was a helluva cheeky tease, and there´s so much cool lore and voicework in that mission that it´d be an utter shame to just dump it forever. I mean, sure, it would be a pain to play as an ET, but would make perfect sense as a Special Assignment, and you´ve clearly demonstrated that it can work, so…

After turning off the rest of the mods, it finally worked. Just in case I’m stupid and thought that it could only collide with the elusive targets mod, here are all of the other mods I was trying to run at the time:
-Elusive Targets+Offline Images
-Sarajevo Six

Besides that, this is a fantastic mod!

IOI specifically placed them on the “deletion lists” to stop people from playing them. This means although the files are there, they cannot be used as they are (you can re-extract them and place them back in like Kevin did). I doubt they’re ever going to come out officially.

Either way, all three are rather weird changes and I wonder why they got implemented

It is likely not intentional, because Inez Ekwensi’s dress is the exact same as Tamara Vidal’s. Her dress had a few options on it (which existed in 2016), but as this dress was used in Sgail (and for an unreleased outfit for Knight) it broke in Hitman 2 (and as a consequence, Hitman 3). It was likely because they changed it to fit the new uses.

Surprisingly, my mod is laughably simple. I replace an array with an empty one.

This is probably the same for the rest of the ETs, they re-used the assets, changed them for the new stuff, and didn’t realise old stuff broke.

can you improve night time Ambrose Island and put it in the ToD ?
because the version of Night time not look good the light look very badly

i just found this mod now lighting-ultimate-2.1
nvm thanks

Peacock version does not currently support the secondary objective

Is this planned to be done or is it more of just a disclaimer? Can’t tell with the use of the word “currently”.