What IOI is doing now is to repair demo instead of turning it into FSP. Even if they want demo to become FSP (maybe), the simpler and more reasonable method is still FSP like H2.

The most incomprehensible thing is that they clearly do FSP so well in H2 of steam and H3 of other platforms, but why they still use demo on steamH3.

Isn’t the Demo the Free Starter Pack, just under another name?
What differences it has comparably to FSP?

FSP is equal to the game ontology. Playing demo will not be associated with the online number of H3, and it is very unstable because it is two servers.
And you can’t buy DLC for demo without purchasing H3 (even if you can carry it forward to demo through buy H1H2)

So they use a dedicated server for Demo instead of giving it for Ghost Mode Revived? (or should I say Alpha)
What a shame man

https://www.hitmanforum.com/t/ghost-mode-mod-release/13544
It can be seen that H3 players can only play ghost mode with H3 players, while demo players can only play with demo players. If the future IOI does not change demo into FSP, it will affect the online of players. For players who bought H3 on EGS like me, they can’t even experience GM at present, and even if they can experience it, they may not be able to play with steamH3 players.

If this mod would’ve given the possibility to play with random opponent, I would use it, but it sadly allows to play only with a certain opponent. That makes GM not that special as it used to be.
So it’s not for me just now. But I still hope

After all, it seems that this is just pulled out by the mod author from the H3 file, which is not officially produced by IOI. Moreover, IOI was also known as “GHOST MODE BETA” before,We don’t even know if they will return GM to H3… 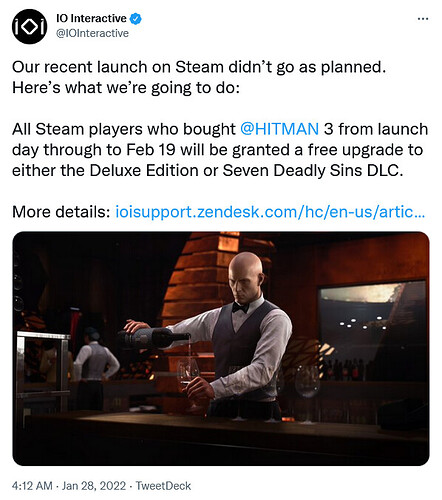 So if I now buy Deluxe, I’ll get 7DS?
Good deal

So people who survived the Epic Launch Catastrophe get no free stuff. Love it, IOI.

Okay, from what I’ve heard regarding 7DS quality, best deal would be to get standard and wait for 7DS to be on sale (since the difference in Russia between Deluxe and Standard is almost equal to 7DS price anyway)

Oh my god! The H3 I bought at EGS suddenly lost its flavor…
Do they mean that their pricing is wrong, or does it mean that such an operation does not meet their expectations?

Do they mean that their pricing is wrong

At least they saw “mixed”

Pretty galling to see 7DS given away for free on just one platform. The Steam issues are comparable, if not less severe, than those faced by Epic players last year. This reads like a bribe to improve reviews on Steam more than anything else. Good for Steam users, but I cannot deny my own disappointment.

I’ve upgraded to the Deluxe Pack on Epic, but I’m not interested in buying 7DS until it is heavily discounted. I have always felt the content is not worth more than £5. Now, I would begrudge paying anything.

If the 7DS were merely cosmetic packs (as was initially planned, according to Travis), I would happily ignore them. But, instead, they are linked to challenges and become essential to 100% complete the game.

Now the game is 50% of again on Epic on the Lunar sale, it’s like they’re actively mocking people lmao

Do the Steam bundles with Hitman 3 get discounted further if you own some of the contents from it?

I was under the impression I heard they somehow didn’t, but this free offer could be a workaround to get people extra discounts on those bundles, if IOI can’t put H3 itself on sale for the next month